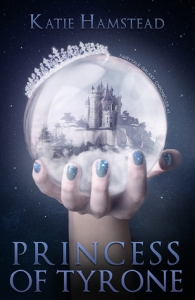 “Apolline is happy hunting magical creatures on her pirate infested outer-perimeter planet. She is a fantastic shot, and doesn’t flinch at the blood and guts of her kills. Never once did she consider she could be the missing Princess of Tyrone.

All her life, she has heard the story of the Princess, cursed to sleep for eternity, unless her betrothed, the Prince of Oran, gave her true love’s kiss. Although Apolline knows she is betrothed, she thinks her fairy guardians arranged it out of ignorance of human ways. The thought she could be a princess is inconceivable.

Then Allard appears. Handsome, charming—but he’s not hers to have. He’s betrothed, too. Her guardians warn her against her new found friendship, but she and Allard meet in secret anyway. Despite her rough exterior, he sees beyond her gun-slinging bravado, and their love blossoms.

But the deadline for the sleeping curse is approaching. If Apolline falls in love with the wrong person, she could end up sleeping forever.

A quirky, adventurous retelling of Sleeping Beauty, with a less than princess-ly princess!” –Goodreads

Princess of Tyrone is a story summed up by its title and yet it entails much more than just that. This book weaves together a version of the classic Sleeping Beauty fairytale but with a futuristic spin. Filled with lasers, magic, spaceships, hunters, royalty, pirates, and more, this galactic adventure will sweep you off your feet and chase you to the brink of destiny.

The characters were genuine, filled with rocky pasts and uncertain futures. The plot took a well-known tale and expanded it filling in the gaps with monsters, backstories, distant planets, and endless imagination. The pacing was both slow and quick. While the action pushed forth at a thrilling gasping speed, there remained slow intimate moments where we got to simply walk side by side and observe Apolline’s life.

With a strong princess, a dashing prince, clever fairies, and a vengeful sorceress, this book had all the requirements for a delightful read. While this book could be read as a stand-alone the epilogue leaves just the barest tantalizing hint of a darker possibility for the future and we are left wondering what rollercoaster they will find themselves on next.

Flowing with ferocity, defiance, love, and fun, Princess of Tyrone is a fantastic ride for any fairytale lover.

Purchase here: The Princess of Tyrone

Born and raised in Australia, Katie’s early years of day dreaming in the “bush”, and having her father tell her wild bedtime stories, inspired her passion for writing.
After graduating High School, she became a foreign exchange student where she met a young man who several years later she married. Now she lives in Arizona with her husband, daughter and their dog.
She has a diploma in travel and tourism which helps inspire her writing.
When her debut novel, Kiya: Hope of the Pharaoh, climbed into bestselling status, she believed she was onto something, and now has a slew of novels available, and is published through Curiosity Quills Press, Soul Mate Publishing, and REUTS Publishing.
Katie loves to out sing her friends and family, play sports, and be a good wife and mother. She now works as an Acquisitions Editor to help support her family. She loves to write, and takes the few spare moments in her day to work on her novels.
-Goodreads