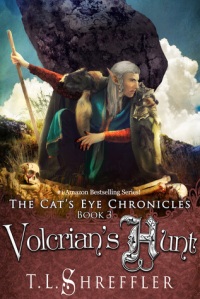 “A plague is spreading across the land. Crops are rotting. People are dying in the streets. Sora, with the help of her magical Cat’s Eye necklace, is the only one who can stop it.

She must travel overseas to the Lost Isles, a place of legend and mystery. Only there can she destroy the bloodmage, Volcrian, putting an end to the curse. She is accompanied by Crash, a lethal assassin who once threatened—and saved—her life. But Sora is beginning to question her dark companion. He seems to be carrying a secret; a hidden past that could endanger them all.

Meanwhile, they are hunted by an underground society known as the Shade. For centuries, the Shade has waited for the perfect opportunity to step into the light. Now they are perilously close to resurrecting a Dark God and unleashing a wave of unimaginable destruction. They only need to collect the three sacred weapons, and Sora has already found two….”
–Goodreads

Three books down and only two left to go! (Unless Shreffler decides to extend the series…)

I feel like I say this for all of these books and I bet I’ll say it again for the next ones but once again Shreffler takes us on a riveting adventure filled with new places, new Races, and new chases.

As we pick up from that cliff hanger that was the end of book 2 we find our crew battling the cursed sea and its storms, scrounging about on tropical islands, exploring magical caves, and at last setting foot upon the long forgotten land of the Harpies where even the darkest secrets cannot hide in the light. The story does an excellent job with describing each setting and drawing us into it alongside the unconventional crew.

The fallen island of the Harpies was a very interesting place indeed and yet there was hardly any time to really feel at all acquainted with it. It seemed they hardly had any time to look around before their quest swallowed them up again. Ah, but the Harpies…yeah, they’re not the nicest lot. Awesome concept indeed and it’s easy to see how their separation fed into their fear and arrogance but with regards to saving the world uh yeah, they need to get over themselves.

The rotating POVs continue but by the end they all finally converge. And now we must wait and see how this vastly enlarged crew will set their sails.

New characters! Well there are always new players being added and subtracted from the game and in this book we particularly meet Caprion, Silas, and Ferran. Caprion is not only a Harpy but he is a Seraphim, bred for war. He’s likable even if the others are slow to trust him and I really look forward to seeing what sort of role he will play in the future. Side note: Caprion has his own novella if you want to read more about his story – Caprion’s Wings.

We really get to spend a good amount of time with Ferran in this book as he travels with Lori. He’s an interesting fellow. Relaxed, charming, and definitely a rogue. He leads Lori to Silas, a Dracian pirate captain, who turns out to be related to none other than Jacques and Tristan! And so we are coming full circle as the world shrinks and shrinks, as the chase narrows in, as the forces gather for the epic ending that concludes this book.

The second leg in their quest has come to an end forming a very good stopping point. Like I said in my last review books 2 & 3 zoomed by as if they were meant to be one big book. This book wraps up nicely like the first book did, and also like the first book we are well aware that their quest is not yet finished. At least this time the characters seem to know this as well.

Oh but the romance you may or may not ask? Well at last we see some actual progress. We all knew it was possible in the first book. We all knew it was definitely coming in the second book. And now we have finally seen it surface…although it does seem the denial remains strong with them, as they are quick to shut the door on it at the end. What a tease. Whatever, we know they belong together.

But on the note of Crash I will tell you that all those secrets he’s been so good at hiding? Well obviously not all of them tumble into the light but boy one big secret sure did and we watch as Sora must reevaluate her companion whom she thought she knew so well.

How’s Laiana doing? Well Laiana’s character continues to undergo development in this book and all I’ll say is that I do wonder where her path will ultimately take her. I’m not saying I was completely surprised by the turn of events but I do remain curious.

Ugh and I just have to say that Volcrian’s blood magic is really disgusting. I tried very hard not to picture his corpse army at all too clearly. Oh but I will say as Volcrian’s hunt closes in new enemies arise. The Dark God will not be laid to rest quite so easily. So while things seem to be close to wrapping up, what is left may prove to be even more difficult to overcome than what they’ve miraculously managed so far.

Leave it to Shreffler to shake things up every time we think we’re finally getting ahead of the quest.

Volcrian’s Hunt charges full force into the darkness that awaits them. This story is filled with blood and sacrifice as its heroes race to subdue the spreading evil plaguing their world. An epic installment in the series that lays to rest some ghosts while catapulting the trio right into the pit.

One thought on “Volcrian’s Hunt”