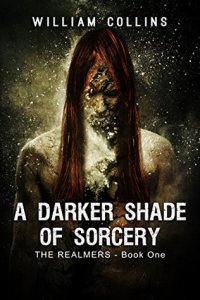 “The lonely and grieving Evan Umbra is the newest Venator to enter Veneseron, the school for demon hunters.

A Venator is a wizard, a spy and a demon hunter rolled into one. They’re taught how to wield their sorcery and enchanted weaponry by orcs, elfpires and aliens alike.

Their missions range from battling monsters and saving countless lives in the multiple worlds, to the more peculiar, like wrangling killer unicorns and calming down drunken yetis. In their free time Venators enjoy goblin soap-operas and underwater bubble travel, but they also understand that every new mission they’re given could be their last.

Whilst learning how to manipulate the elements, summon creatures to fight for him and shoot Spellzookas, Evan encounters a dangerous rival and meets a girl who makes him feel nauseous; but in a good way. He makes the first friends he’s ever had in the carefree Jed and the reckless Brooke. Whilst Jed gets on the wrong side of a rival Venator, Brooke finds herself falling for the enigmatic demon hunter who brought her to Veneseron, not knowing he isn’t quite human. But it soon becomes apparent that Evan is more than just a Venator. Everyone wants to kill or capture him, from demons to Dark-Venators and even people he’s supposed to be able to trust.

Thank you for sending me a copy of your book! When I read the description I was definitely interested and I’m glad it didn’t disappoint me. Overall this book is a darker shade of fantasy but definitely deep within the realm of all those classic fantasy/paranormal goodies that include things such as magic, monsters, and adventure.

An easy read this story kicks off with nightmares and wastes no time in bringing such horrors to life. Crossing worlds, ancient battles, and creatures that stab terror even into the meanest bully, Evan finds his life turned upside down when on a fateful afternoon magic sparks in his veins.

The book opens in presumably modern day England with poor Evan, no more than a mourning orphan, being tormented by bullies. We have just enough time to gain a semblance of Evan’s life before we’re whisked off to meet his destiny: Evan is to be trained at Veneseron, a school for demon hunters.

There’s something about a school of magic that almost never ceases to draw me in and it was fun to read about it in this book as well. We meet some interesting characters, explore interesting places, and watch excitedly as everything collides with destiny.

Colorful imagery and quite an imagination fill the pages of this series opener. I liked reading it and I’m happy that it’s the type of book that will also appeal to the male half of the reading world. There’s such an overwhelming trend of books geared towards girls these past few years that it’s an honest relief to read a book that entertains any teen that might pick it up.

With its fast pace and twisting story this book is an entertaining read. It’s not my favorite book, I admit, but I definitely think that there’s an audience out there that will love it.

William Collins is a writer from the UK and the author of The Realmers Series, as well
as the spin-off Realmer Chronicles.

A Darker Shade of Sorcery is the first in The Realmers Series. The sequel, Moonlight War, will be out soon.
-Amazon.com