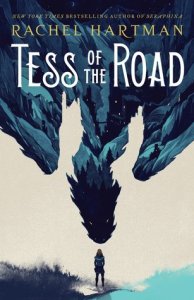 “In the medieval kingdom of Goredd, women are expected to be ladies, men are their protectors, and dragons get to be whomever they want. Tess, stubbornly, is a troublemaker. You can’t make a scene at your sister’s wedding and break a relative’s nose with one punch (no matter how pompous he is) and not suffer the consequences. As her family plans to send her to a nunnery, Tess yanks on her boots and sets out on a journey across the Southlands, alone and pretending to be a boy.

Where Tess is headed is a mystery, even to her. So when she runs into an old friend, it’s a stroke of luck. This friend is a quigutl–a subspecies of dragon–who gives her both a purpose and protection on the road. But Tess is guarding a troubling secret. Her tumultuous past is a heavy burden to carry, and the memories she’s tried to forget threaten to expose her to the world in more ways than one.”
–Goodreads

Hartman has at last continued the intricate world she had crafted in Seraphina by composing a duology on Seraphina’s half-sister, Tess (who is also Jeanne’s twin sister). Not only is the cover fantastic but as Tess but ghosted through the pages in Seraphina’s story you don’t have to worry about reading it before you embark on Tess’ journey. True there are certain characters and references that may make more sense or spark familiarity in you but it’s not strictly necessary to read one sister’s story before the other’s…except for the technical fact that time-wise Tess’ duology takes place after Seraphina’s so I suppose it might hold the occasional spoiler or two…

She [Seraphina] didn’t have it so tough; she’d always been the special one. The smart one. Jeanne was prettiest and sweetest. That hadn’t left much scope for Tess beyond “the one most likely to get spanked.”

Tess is a complicated character. She’s the type of main character that does not often grace the page in the spotlight. She’s not particularly likeable and yet I’m drawn in by her story all the same. So while she might be better suited as a supporting role (which she was barely even that in Seraphina’s grand adventure) she has a staggering depth that demands a story of her own.

Seraphina pops up for a glimpse once in a while, as is expected considering her position in life and her connection to Tess, but this is not her story. In fact it was incredibly interesting to read about Seraphina from such a different point of view. Seraphina is an intelligent, warm, kind-hearted half-dragon who helped save the kingdom…at least in her duology. But reading about her from Tess’ point of view is a bit like reading about Cinderella from the ugly stepsisters’ POV. Seraphina is who she is, but perception can be vastly different even from those whom shared a childhood home.

I admit I was expecting a story about dragons and adventure filled with exciting twists, and while I did get those things I was surprised to find that I also received a story flowing with pain and a darkness no one can seem to see or understand except for Tess herself setting her on a journey of last chances to rescue herself from a fate of pure suffocating self-loathing that threatens to drown her until she disappears. The road alluded to in the title of this book is certainly literal as Tess follows the road through cities and across lands, but it is also stunningly figurative for the journey of self-healing that she unexpectedly embarks on.

This may be categorized as a YA Fantasy tale, but the story goes soul-deep, excavating and exploring the depth and complexity of human emotion, in particular self-destruction, guilt, sorrow, bitterness, shame, love, and heartbreak. There may be dragons in this world but Tess’ story is as poignant as any YA book written to reach out to those struggling with the burden of feeling like a mistake in the world. Absolutely riveting, heart-wrenching, inspiring, and beautifully written.

Tess was a wild thing growing up, able to obey rules and expectations with the ease of mixing oil and water. And for many things gone wrong in her life she was undeniably to blame (which could at times make her a frustrating character to read), but for others she was absolutely not. However it is often easier to blame oneself and slowly be crushed by the weight of shame, no matter how ill placed. And many around her found it easier to cast their sins upon Tess as well. Why have everyone sullied rather than accept the troublemaker as the root of all of their problems?

So at times I admit I felt it difficult to sympathize when so many of her misfortunes occurred of her own making but as her buried truths slowly unfold throughout her journey it becomes more and more clear just how greatly Tess has suffered and just how deep she has forced herself to bury it. And while perhaps she shares some burden of blame for some of her mistakes, much of the blame for those soul-draining tragedies come from those closest to her and for that I sympathized greatly. Tess was told she was born bad, and this story shows the painful journey of learning how to break free.

Seraphina saved the world and Jeanne fell in love, but poor Tess just can’t seem to keep herself out of trouble. When we are introduced to her at the start of this book we see that she has grown into a very bitter alcoholic willing to destroy herself out of spite or guilt or weariness even though deep down she’s screaming at herself to be good, to breathe, to accept herself, to seize opportunity and claim freedom.

Tess of the Road is a story about grief and feeling like we’ve messed up so bad and so often that there’s no going back, but more importantly it is a story about finding your way back and knowing that no matter how you may feel, you are not alone and there is always forwards even if the road is painful and long. Roiling with a surprising spectrum of vivid emotion this is a journey filled with sacrifice, heartbreak, loyalty, and disappointment. A path paved with courage, anger, healing, painful truths, and an unleashed ferocity for freedom. Overflowing with dragons, mystery, and adventure, but ignited by a girl long beaten and broken until only her hatred could bare to face the world locking all hope and softness deep within…until the day she left her prison to take a chance on the road and with each step her life forever changed.

Hartman does an absolutely exceptional job with her character work in this book. The world-building was lovely, yes, but this book was focused carefully upon its characters. She did such an excellent job crafting fully dimensional characters to the point that they will surprise you even to the very last page of the story. Villains were not always such, and the angelic are not spared from sin. Tess’ stories and the revelations it holds begs readers to learn what she did and seek beneath the surface, for people are never quite what they’ll have you see and assumptions are more likely to bury than to uncover truths gasping for air.

Purchase here: Tess of the Road 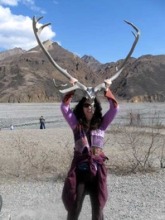 Rachel Hartman’s first YA fantasy novel, SERAPHINA, will be published by Random House on July 10th, 2012.

Rachel was born in Kentucky, but has lived a variety of places including Chicago, Philadelphia, St. Louis, England, and Japan. She has a BA in Comparative Literature, although she insists it should have been a BS because her undergraduate thesis was called “Paradox and Parody in Don Quixoteand the satires of Lucian.” She eschewed graduate school in favour of drawing comic books. She now lives in Vancouver, BC, with her family, their whippet, and a talking frog and salamander (who fight zombies)(really. There are a lot of zombies in the Pacific Northwest).
-Rachel Hartman’s Website

4 thoughts on “Tess of the Road”