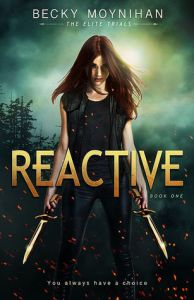 “AN INESCAPABLE CITY. THREE DEADLY TRIALS. ONE WAY OUT.

For eleven years, Lune Tatum, adopted daughter
of the Supreme Elite, does as she’s told.
She doesn’t ask questions.
She trains for the Trials. She follows the rules.

And she wants out.

Her plan has always been to win the Elite Trials
and earn Title of Choice, her only chance at freedom.

But a boy from her past
shows up on her eighteenth birthday.
His presence threatens Lune’s carefully laid plans
and exposes memories she’s desperate to forget.
One thing is painfully clear: he can’t be trusted.
He has secrets. Big ones.
And they could ruin everything.”
–Goodreads

I was happy to have been offered an advanced copy from the author for this start to a new dystopian trilogy. I hadn’t read straight dystopian in a while so I was excited for the change of pace.

The world-building was just detailed enough to envision and accept, but not so overwhelmingly caught up in itself that it got in the way of the plot’s momentum. Some people love pages of detail describing everything and answering every possible question, but I prefer when some of it is left to the imagination. For me the world-building is the stage, the characters are the actors I become emotionally attached to, and the plot is the reason why I’m still in my seat held with rapt attention. But that’s just me. Anyway, I was happy with the balance of detail and action in this book.

That being said, I think this is definitely a book that relies heavily on needing the reader to like the main character. No world-building or plot twists can save it if you don’t like her haha. I thought she was alright. She had moments of being badass, funny, and sweet, but at other times I wanted to start rolling my eyes and skimming past it. But that’s pretty typical of most YA MC’s (for whatever reason lol).

I think the concept for this book was pretty interesting. It was a different vision of the future than I’d read before and the character twists that built up just made it all that much more exciting. Honestly if you’re a fan of YA Dystopia then you’d probably really enjoy this one and even if you’re not generally a reader of that genre this could actually be a good intro book for you.

Action, romance, and an unyielding fight for freedom rage within these pages as this fallen earth builds cages of secrets that Lune sets ablaze. Reactive is a gripping addition to the dystopian genre and an exciting start to The Elite Trials trilogy.

Becky Moynihan is the author of The Elite Trials trilogy as well as the coauthor of the Genesis Crystal Saga with Tyffany Hackett. She lives in central North Carolina with her husband, daughter, and goldendoodle.
She spends her days staring at her picturesque backyard, wishing there weren’t so many bugs outside, scarfing down chocolate, and sipping on Mountain Dew.
In her spare time, she writes action, sass, and romance, draws horses, and reads all the books.
-Goodreads

One thought on “Reactive”