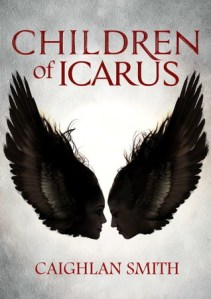 “It’s Clara who’s desperate to enter the labyrinth and it’s Clara who’s bright, strong, and fearless enough to take on any challenge. It’s no surprise when she’s chosen. But so is the girl who has always lived in her shadow. Together they enter. Within minutes, they are torn apart forever. Now the girl who has never left the city walls must fight to survive in a living nightmare, where one false turn with who to trust means a certain dead end.”
–Goodreads

Wow, not what I expected but what an intriguing concept!

It’s almost like The Hunger Games combined with The Maze Runner and then twisted into something new via Smith’s imagination. Also like Suzanne Collins’ amazing trilogy this book takes great inspiration from Greek mythology. In this book, each year children between ages 10-16 are chosen to enter the Labyrinth and solve their way to Alyssia (sort of like Heaven, I suppose) and become angels. Everyone is utterly deluded into thinking that their children are special chosen ones whom enter the labyrinth gifted with great destiny. Parents weep with joy, people cheer with pride, and the children enter the gates of the labyrinth blessed. But it doesn’t take long for the truth of the labyrinth to reveal itself…at least to those who survive it for the rest are shredded and devoured with no time to process the cruel betrayal of Icarus.

I don’t quite know what it was but I read this whole book in one afternoon. I couldn’t put it down and now I wish I had a sequel to find out what the heck will happen next.

The main character is never given a name. For a while she is called ‘Clara’ but that is the name of her best friend. Clara is strong, vivacious, devout, and praying every second of every day for the honor to enter the maze and become an angel. Her best friend, however, is cripplingly shy and shamefully hopes that she never has to enter the maze. The protagonist is a lovely girl but her shyness is life inhibiting. She can scarcely talk to anyone, she cries incessantly at the bloody truth of nature, and she can’t make her body move even to save a life. It’s almost agonizing to read…okay that’s an exaggeration but it’s a little difficult to adjust to the protagonist after having read a slew of books with characters like Katniss, ya know? But I did actually like how she doesn’t have a name…it sort of makes sense because throughout the book it’s quite evident that she doesn’t really know who she is. Her whole life she has lived as Clara’s shadow but by the end there is nothing left but her and now it is time to find out who exactly that person is.

This anonymous protagonist is so weak, so pathetic, so woefully useless that it’s almost harrowing to read except that no one, including herself, ever excuses her helplessness. Even she knows she lacks the will or confidence to do anything. It upsets her and yet she’s always been shy and such a thing is not so easy to change. She doesn’t want to be useless, she’s just not sure how to go about changing it. As the book goes on we witness time and time again how her sheltered shyness hinders her and it takes almost two-thirds of the book to finally see some change in her. She tries so hard to shut everything painful out of her head that she practically becomes a head-case like poor Elle. One finally witnesses brief glimpses of something other than weakness, terror, or appeasement in her personality when she finds herself able to wield a dagger but it’s not until her life has been seriously threatened quite a few times and her last hope of safety has irreversibly eroded that she finally finds herself able to leap into action.

A woman of legend and rumor crosses paths with the protagonist and she little by little, day by day, forces the girl to pick up a weapon and slay her demons. By the final breath of the book I find myself looking at the anonymous Icarii and see potential, hatred, and determination reflected in her gaze.

This book is written in first person POV but with very limited dialogue. It makes sense though because as I’ve said earlier the protagonist is so intensely shy that she can barely speak more than a handful of words little more than at a whisper. So instead we are trapped inside of her mind as she observes, listens, frets, and decides. This book is rather different from most on the market these days in that it does not center on a strong female hero. This girl is not particularly strong and she is not a hero. But we watch her quiet existence escalate to a point where I fear for her enemies in the sequel because if she embraces the Executioner’s lessons and continues her training then she will undoubtedly become a force no one would have ever suspected nor would want to cross.

Another difference with this book from its competitors is that there is no romance. It delves into the protagonist’s deep desire for sibling love and friendship but there is no romance, no boy that makes her heart pitter-patter. Instead she is a petrified creature hiding in her shell walking lightly through each day ignoring the contempt and dislike from her peers. Even those who extend kindness towards her are hardly rewarded with much in words or even a whole smile.

The protagonist is just a quaking little mouse while around her blood, horror, monsters, and nightmares tear apart her world. It’s not until the end that she finally begins to realize that she cannot ignore reality, that she is not a little mouse, and that she too has sharp claws. If you can put up with her being the most helpless person ever then I actually do find myself recommending this book. Yes her overt shyness was a pinch agonizing at times but that aside Smith has written a good story. It’s dark, it’s twisting, it’s intriguing, and I find myself itching to read what happens next. Perhaps it is partially because the protagonist is so terrified and weepy for most of the book that I am left excitedly curious to know how she will evolve after all this first book has put her through. When a main character starts out tough you know how the cliché plot is gonna go down. But her? I honestly don’t know and that fascinates me.

Something I deeply want to know more about is the labyrinth itself. Who built it? Why is it there? Why do they send children into it each year (and why are they shot rather than granted re-entrance to the city)? Smith has succeeded in constructing an interesting world that, when one thinks on it, remains quite suspicious and evasive. This book focuses its energy on surviving the labyrinth but now I want to know more. I suppose that’s what the sequel will be for? We shall see… WAIT. Smith: You are intending on writing a sequel, correct?? Don’t you leave me hanging!

Children of Icarus is a lulling tale that defies expectations and rips the smile off your face with its poisoned talons before you can ever remember why you were smiling in the first place. Inspired by Greek mythology, laden with gory nightmares come to life, and steady with its patient tale this book is not quite like anything its companions on the shelves have to offer. A recommended read for anyone with an appetite for the dark, the patience for a resistant game player, and the curiosity of a waiting cat fixated on a mouse-hole awaiting the little creature’s return.

P.S. To be honest I was going to give this book 3.5 stars, but by the end it was wrapped up in my thoughts and I could finally see this series’ true potential and understood how all the pieces were fitting together. Perhaps it’s different from what I’ve been reading lately but ya know what? It stirred up stronger emotions in me by the end than some of those books so I’m going to go ahead and round up to 4 stars and I look forward to the sequel!

Similar Recommended Reads: The Maze Runner by James Dashner, The Hunger Games by Suzanne Collins, Lord of the Flies by William Golding 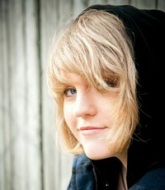 20 year old author and university student who gets very distraught over proper bibliographies for academic papers (as in, I’m anxious because I always mess them up.) Adore reading almost as much as I adore writing– at that, give me any medium of story. Books are my fave, but I’ll inhale movies, tv shows, graphic novels, manga, plays, video games, horror-stories-around-the-campfire (as long as there are smores.) When I’m not reading, writing, or being a stressed out uni student, I’m probably gaming or sleeping or spinning around on my wheelie desk chair. I’m allergic to cats. -via Goodreads

About the Author: As a child, Caighlan Smith loved to build and navigate pillowmazes. An adoration of Greek mythology soon followed. Canadian born and raised, Smith studied English Literature and Classics at Memorial University of Newfoundland. Her first novel was published when she was nineteen.
-NetGalley