“A young girl thirsts for love and freedom, but at what cost?

Ruby dreams of escaping the Congregation. Escape from slaver Darwin West and his cruel Overseers. Escape from the backbreaking work of gathering Water. Escape from living as if it is still 1812, the year they were all enslaved.

When Ruby meets Ford—an irresistible, kind, forbidden new Overseer—she longs to run away with him to the modern world where she could live a normal teenage life. Escape with Ford would be so simple.

But if Ruby leaves, her community is condemned to certain death. She, alone, possesses the secret ingredient that makes the Water so special—her blood—and it’s the one thing that the Congregation cannot live without.

Drought is the haunting story of one community’s thirst for life, and the dangerous struggle of the only girl who can grant it. ”
–Goodreads

So many theories buzzing in my head. So many questions have risen and fallen and most are left unanswered but it fits this book. This book is one of those types that can leave many questions unanswered and the reader will still feel satisfied because the mystery fits the story. Enough was answered to make it an intriguing read and enough was left open for interpretation and guesses to make the story last in the reader’s memory.
Well written and an interesting idea.
Sad, too. 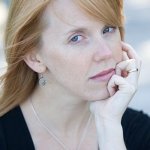 Pam Bachorz grew up in a small town in the Adirondack foothills, where she participated in every possible performance group and assiduously avoided any threat of athletic activity, unless it involved wearing sequined headpieces and treading water. With a little persuasion she will belt out tunes from “The Music Man” and “The Fantasticks”, but she knows better than to play cello in public anymore. Pam attended college in Boston and finally decided she was finished after earning four degrees: a BS in Journalism, a BA in Environmental Science, a Masters in Library Science and an MBA. Her mother is not happy that Pam’s degrees are stored under her bed.
-Goodreads