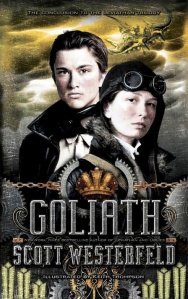 “Alek and Deryn are abroad the Leviathan when the ship is ordered to pick up an unusual passenger. This brilliant/maniacal inventor claims to have a weapon called Goliath that can end the war. But whose side is he really on?

While on their top-secret mission, Alek finally discovers Deryn’s deeply kept secret. Two, actually. Not only is Deryn a girl disguised as a guy…she has feelings for Alek.

The crown, true love with a commoner, and the destruction of a great city all hang on Alek’s next–and final–move.

The thunderous conclusion to Scott Westerfeld’s Leviathan series, which was called “sure to become a classic” (SLJ).”
–Goodreads

This book took me weeks to finish but that is ONLY because I simply couldn’t bear to have this series end, otherwise I could have finished it in a single day! I never really thought I’d enjoy historical fiction but this series was a perfect blend of history, action, science-fiction, romance, comedy, tragedy, and adventure. I loved it. I loved the whole thing. No if’s and’s or but’s about it. I loved the Leviathan trilogy and neither my ears nor heart shall hear any differing opinion on the matter.

P.S. Adding in Nikola Tesla in this book was genius. He’s such an incredibly interesting person to study (thanks to my high school Physics class) and bringing that element into Goliath was such a natural fit for the story and really added to the building action as a whole.

One thought on “Goliath”