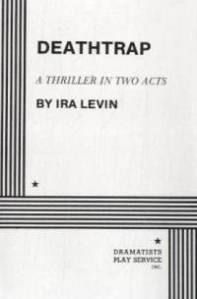 My attempt at a Brief Summary:

Tough to describe but it’s a comical thriller that will keep you on the edge of your seat caught between laughter and terror!
-pooled ink

This play is so incredibly funny and convoluted! I love it! I actually performed a scene from this play for one of my acting classes in college. It’s the type of play that is maybe a bit difficult to describe or explain but your enthusiasm as you’re stumbling over your words is enough to get others to trust you and read it. I mean it’s a comical murder mystery of sorts where the plot keeps twisting and you’re in on it or at least you think you are and watching everything twist and turn keeps your intrigue from Scene One to the final curtain! It’s a murder thriller within a murder thriller within a murder thriller! It’s like the Inception of comedy murder thrillers. I wish I could see this play performed live because I know it’ll be even better than reading it and it was pretty great just reading it.

I highly recommend this play to anyone and everyone with an interest in theatre, comedy, puzzles, or a good ole murder mystery.

Other Recommendations: What the Butler Saw by Joe Orton, and Woman in Mind by Alan Ayckbou

Levin graduated from the Horace Mann School and New York University, where he majored in philosophy and English.
After college, he wrote training films and scripts for television.
-Goodreads