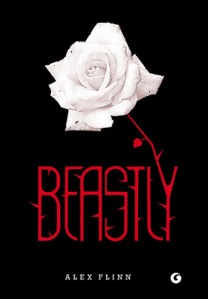 A beast. Not quite wolf or bear, gorilla or dog but a horrible new creature who walks upright—a creature with fangs and claws and hair springing from every pore. I am a monster.

You think I’m talking fairy tales? No way. The place is New York City. The time is now. It’s no deformity, no disease. And I’ll stay this way forever—ruined—unless I can break the spell.

Yes, the spell, the one the witch in my English class cast on me. Why did she turn me into a beast who hides by day and prowls by night? I’ll tell you. I’ll tell you how I used to be Kyle Kingsbury, the guy you wished you were, with money, perfect looks, and the perfect life. And then, I’ll tell you how I became perfectly . . . beastly.”
–Goodreads

First of all I really like the cover. I should mention book covers more in my reviews perhaps because even though the saying “don’t judge a book by its cover” is true the book cover does say a lot about the book (or at least it should) and it gives the reader a first impression. So high-five to Alex Flinn and her cover artist. The cover is simple and fitting.

I quite enjoyed this book. If I am completely honest then I’ll admit that I did like the movie adaptation a tad better but that doesn’t mean the book isn’t worth the read (it just means that the movie starred Alex Pettyfer. Haha just kidding…mostly).

Flinn devises an interesting take on the old and well-known story of Beauty & the Beast. Brought into modern day with a few tweaks and changes this is the story of a privileged teenage boy in New York City who upsets a witch and is cursed as a beast until he can find true love. So he’s not a prince, he’s not in France, and he doesn’t live in a castle but there is a witch and he does become a beast.

This book is actually a good and quite devoted adaptation to the original (or at least the Disney version) story. It’s a sweet romance between Kyle and his ladylove and a telling story of his struggle to overcome his vanity and empty upbringing.

There’s a part of this book where throughout the story he goes on this online chat group where he meets other cursed or mythical creatures like himself and while I kinda liked it I also kinda didn’t. It was…okay. Also something I liked better about the movie than the book is that in the book he becomes a beast with fur and claws and whatnot while in the movie he becomes altered with no hair, scars on his body, and absolutely covered in tattoos. To me the whole mermaids, vampires, and beasts thing is totally fitting for a fairytale but I just couldn’t quite wrap my head around it fitting modern times. It just didn’t click for me. I sort of felt that if you’re going to modernize everything else then you should modernize the beast as well but hey, that’s just one opinion.

Those issues aside I really enjoyed this story. I love reading books because even if I love their film adaptation the book always provides more insight into the characters’ heads and I love that.

A cute romance that I recommend you give a try and if it’s not your thing then maybe try the movie but Alex Flinn wrote a creative and interesting modern adaptation to an old and classic fairytale and I’d hate for you to miss out.

P.S. If you’re a fan of the television show Once Upon A Time by ABC then you’ll probably enjoy Beastly as well as her other books.

I started writing an early (and laughable) version of Breathing Underwater in college (I was really bored on a car trip with my parents). I later learned that my mom tossed it out when she was cleaning my drawers. Thanks, Mom! I didn’t get back to it until I had my first daughter, Katie. I’m self-taught. I went to the library and took out books on writing. Then, I read a lot of young-adult novels by writers I admired. I write my first drafts longhand, then I type them.

Right now, I live half a mile away from my old middle school, in Palmetto Bay, a suburb of Miami, with my husband, daughters, dogs, and cats.
-Goodreads