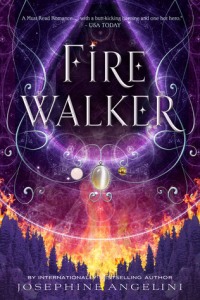 “You think I’m a monster, but my choices, as ruthless as they seem, are justified.”

Lily is back in her own universe, and she’s ready to start a new life with Rowan by her side. True, she almost died in the Pyre that fueled their escape from New Salem, and must hide her magic for the safety of everyone she cares about, but compared to fighting the Woven, the monstrous creatures inhabiting the alternate Salem, life is looking pretty good.

Unfortunately, Lillian, ruthless ruler of the 13 Cities, is not willing to let Lily go that easily. If she can’t persuade Lily to return to her world, she will force her to come back by doing away with the ones she loves.

Book One: TRIAL BY FIRE

Angelini’s sequel to Trial by Fire in her Worldwalker Trilogy was pretty stellar. I sat down completely unsure of what would happen next and when my brain finally surfaced for a breath of air I was surprised to find I was already quite past the halfway point in the book.

It picked up precisely where it left off in book one and it ran with urgency through to the end. On one hand it was like most middle books in trilogies and fell under MBS (Middle Book Syndrome) but it did so with energy and grace. So yes, while it felt more like a shuttle to the next stop on the ride and like it was just a moment for re-grouping and theories to build up to what I am sure will be an epic ending it was still thoroughly entertaining and definitely captivating.

I loved seeing Lily and Rowan functioning in Lily’s world. (I guess that could potentially be a spoiler alert but honestly it wasn’t hard to guess that would be their destination at the end of book one). Taking these changed and familiar characters and plopping them down in a totally new setting only helped build their dimensions and layers.

The new coven was awesome and completely unexpected and also introduced some new characters, which is always welcome to help a story grow and avoid stagnation. The authorities were understandable but still incredibly irritating in Lily’s world. And overall I really enjoyed seeing the effect of the “end” of an adventure. In books people are sucked into magical realms all the time but rarely do you get to see just how it affects those left behind and Angelini definitely granted us a glimpse of that. A trip to Lily’s world helped to continue the growth of the characters and add further depth to the difficult decisions Lily has and will continue to have to make.

One of my favorite parts of Firewalker though? More time with Lillian. I have a weakness for learning the why’s and how’s of villains (maybe I should have been a psychologist ha) but it intrigues me to no end. I’m never satisfied with the simple ‘good guy versus bad guy’ because I want to know why. I don’t believe people are born good or bad so I’m always interested to know how and why a person becomes who they become (one of the reasons I fell in love with Leigh Bardugo’s Six of Crows – I got to meet both Bardugo & Angelini at their book tour stop in Georgia!! Okay back to the review). More time with Lillian means more insight into Lillian. You discover a bit more of who she was, who she is, and who she will become as well as the game-changer that tilted the scales of her moral compass.

When Angelini discussed her book during her Fierce Reads book tour I was so excited to read it but I couldn’t fully understand or appreciate what she was telling us until I read the book. And now that I have I get it. There are always choices but sometimes they’re all with terrible outcomes. How do you choose? No matter what, people will die. The burden of choosing who will die is immense. Lillian has chosen. Alaric has chosen. But it seems that Lily and her fresh perspective might, just might have found a third and less dire option.

If you’ve read Trial by Fire then keep up with the series. If you haven’t read the first book then do it. This is one series that you for certain do not want to miss out on. Magic, science, love, hate, loyalty, betrayal, it has it all and more. Angelini’s imagination has far from run dry and you’d better buckle up for the ride.