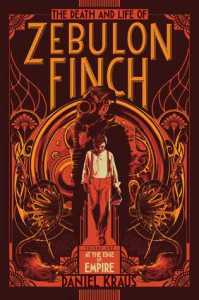 “May 7, 1896. Dusk. A swaggering seventeen-year-old gangster named Zebulon Finch is gunned down on the shores of Lake Michigan. But after mere minutes in the void, he is mysteriously resurrected.

His second life will be nothing like his first.

Zebulon’s new existence begins as a sideshow attraction in a traveling medicine show. From there, he will be poked and prodded by a scientist obsessed with mastering the secrets of death. He will fight in the trenches of World War I. He will run from his nightmares—and from poverty—in Depression-era New York City. And he will become the companion of the most beautiful woman in Hollywood.

Love, hate, hope, and horror—Zebulon finds them. But will he ever find redemption?

Ambitious and heartbreaking, The Death and Life of Zebulon Finch, Volume One: At the Edge of Empire is the epic saga of what it means to be human in a world so often lacking in humanity.”
–Goodreads

This is a short review because I’ve yet to finish this book (*update…uh now that I’ve written my review it turns out it’s not so short). I say “yet to finish” because I really hope I get around to actually one day finishing it but for now I’m setting it down…okay actually I set it down a couple weeks ago and just simply drifted away.

This book is horrifying, grotesque, gruesome, vivid, and terrifying. This book pulls forth the grime of human life from the easily overlooked shadows and into the bright sunlight for us to scrunch our noses at in distaste while simultaneously finding ourselves forced to deal with the unpleasant reality. This book tells a story whose intrigue carries its reader along with its plot on a bloody river and no matter how many times you try to escape from the current or grasp the riverbank you feel your grip slipping and sliding as the plot pulls you back in all because of that feline killer, curiosity.

I’ve never cringed so much when reading a book. Yes, I am a queasy person who detests horror movies and I’m telling you, those of you with a vivid imagination will hardly need it. Torture, criminals, and an endless list of horrors present themselves in this book. False dentists who forgo Novocain, needles and large pins piercing the body’s vital organs, rotting innards spilling out of a carved cavity, decaying corpses, humans in cages, it goes on and on and I am keeping to the far surface of details. And yet, and yet I kept coming back to this book. I would become so revolted I would have to set it down but the next day I was back at it reading and reading with a need to know about this Zebulon Finch. I read where he came from, I read a bit of where he has been, I read about where he thought he might go, but I wanted to know where he’d end up. No, I know where he ends up. I needed to know how and why.

I made it about a third of the way through the book give or take and then my life got busy with appointments and left little time to read and then other books waltzed into my life and now here I am. No further along on Zebulon’s story and no burning desire to immediately dive back into that life of his. I will finish this book one day because I need to know. But for now I will simply say that this book is indeed a good one and despite not knowing all of its contents I would still recommend it.

Perhaps you thought the title sounds a bit out of order? Shouldn’t it be “Life and Death”? No, Kraus has written the title perfectly and as you read you shall see why.

This book is an uphill journey. Mr. Finch may believe he has willingly crawled his way into Hell but even from there he can glimpse a pinprick of sunlight and if only he can taste the opium of hope then perhaps he will find the strength to crawl his way back out.

Is it a comedy? No. Is it an adventure? Perhaps, in a dark way. Is it a romance? Almost and yet far from it. Is it a tragedy? No, I’d say not. Tragedies are dire endings for good people and I am not yet convinced that Zebulon Finch is a good person, but then again neither is he.

A book of addictive intrigue smothered in blood and the darkness of humanity. The Death and Life of Zebulon Finch will shock, tease, and disgust you but through it all you will find yourself drawn in by one question: Why? Who is this young man and why has this death been bestowed upon him? What will become of young Zebulon Finch? He’s not a hero by any means but as time drags on and his body remains frozen in time one hopes that goodness may leave even the slightest mark as he goes on a quest for redemption.

P.S. According to Goodreads his influences include Stephen King and Ray Bradbury which sounds pretty accurate to me after reading (some of) this book.

Purchase here: The Death and Life of Zebulon Finch

DANIEL KRAUS has landed on Entertainment Weekly’s Top 10 Books of 2015 (The Death and Life of Zebulon Finch), won two Odyssey Awards (for both Rotters and Scowler), and has been a Library Guild selection, YALSA Best Fiction for Young Adults, Parent’s Choice Gold Award winner, Bram Stoker finalist, and more.
He co-authored Trollhunters with filmmaker Guillermo del Toro, and his work has been translated into over 15 languages.
-Goodreads