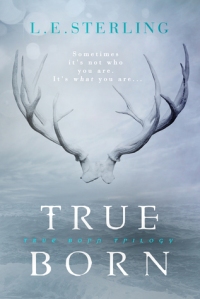 “Welcome to Dominion City.
After the great Plague descended, the world population was decimated…and their genetics damaged beyond repair.
The Lasters wait hopelessly for their genes to self-destruct. The Splicers pay for expensive treatments that might prolong their life. The plague-resistant True Borns are as mysterious as they are feared…

And then there’s Lucy Fox and her identical twin sister, Margot. After endless tests, no one wants to reveal what they are.

When Margot disappears, a desperate Lucy has no choice but to put her faith in the True Borns, led by the charismatic Nolan Storm and the beautiful but deadly Jared Price. As Lucy and the True Borns set out to rescue her sister, they stumble upon a vast conspiracy stretching from Dominion’s street preachers to shady Russian tycoons. But why target the Fox sisters?

As they say in Dominion, it’s in the blood.”
–Goodreads

What I just read, True Born, not only ignites the beginning of a fascinating series but it brings an utterly captivating new angle on the future and the paranormal.

Laced with heavy tones and terrifying chaos, this book crafts a world plagued by pollution, genetic mutation, and a rapid-fire disease wiping all the crumbs from the table. Lucy and Margo Fox were different from birth being born as conjoined identical twins, but despite being surgically separated and coddled in the rich silks of wealth in the Upper Circle they remain puzzles to be solved. Lucy can feel what Margo feels, a slap or a kiss Lucy will feel it. But while Margo dazzles the world with her beauty and grace Lucy hangs back like a shadow, a back up, and a protector. So it’s quite the world-shift when rule-abiding Lucy is the one thrust into a world of political battle, a handsome guardian, and the ruling True Born.

Everything seemed to move so fast in this book. I swallowed the pages whole trying to keep up with its pace. The world Sterling has created doesn’t take the traditional first-quarter to meander about detailing a calm, uninteresting sense of norm or background info before detonating the charges. No, things take a dark turn and plunge downhill quite quickly after the opening and you learn more about the setting, the characters, and the plot throughout the entire book. Never is there a mile long info-dump, a dull pause in the story to inform the reader of some background information necessary for the reader to understand what will come next. Sterling has a time-sensitive case on her hands and she expects you to keep up.

The concept of the Splicers sounds solidly science-fiction in a believable and scarily-maybe-one-day-possible sort of way. The concept of the True Borns is where the paranormal oozes into the tale. At one point True Borns are linked with ancient Babylonian mythology but even without it the story had me captivated enough to easily believe the True Borns just another genetic anomaly or evolution. Human-animal DNA sounds a bit wild and yet it is written in a way that had me convinced.

Stressed throughout the book is the pillar “evolve or die” which in this book could be aligned with the paranormal facets of the people but could also be obviously tied to the entire existence of life on Earth. All creatures, whether human, plant, mammal, reptile, or other, must either evolve or they will die. An incredible number of varying species have surfaced and gone extinct over the course of Earth’s lifetime and it is consistently shown that the species still around are those that found themselves capable of adapting and evolving to the changing environment. So, clearly, a major theme in this book is the food chain/evolution. Another is rich versus poor.

Lucy is one of the richest girls in the Upper Circle with a loving sister and cold calculating parents while Jared, a panther-esque True Born, was cast out from his Laster home and forced to live on the streets. Opposite worlds and yet both find themselves drawn towards one another aligning their worlds under the leadership of Nolan Storm, the greatest True Born, as they hunt for answers. Lucy will not stop until she uncovers the truth about her blood and Jared will not stop until she is safe.

Written with excellent skills of spinning words into images and emotion, True Born begins an exhilarating journey revolving around the curious Fox twins and laced with blood, power, ploys, and money. This is an eerily startling book that will tingle your spine and race your blood as it sprints for answers and ducks for cover unfurling a destiny that has only just begun to surface.

I look forward to reading the sequel.

I was a voracious devotee of sci-fi and fantasy novels all through my childhood, so I suppose it doesn’t come as much of a shock that I’ve returned to the genre with a vengeance.

For a while I turned my back on the genre in favour of ‘high-brow’ literary texts. Ironically, it was my doctoral degree that saw me circling back. There’s something about the way postmodern literature plays with the arcane that had me utterly fascinated, and it wasn’t long until I fell headlong back into my old ways and haven’t looked back since.
-Goodreads