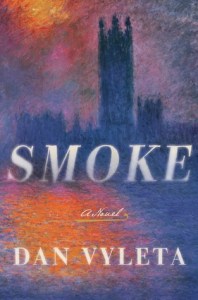 “England. A century ago, give or take a few years.

An England where people who are wicked in thought or deed are marked by the Smoke that pours forth from their bodies, a sign of their fallen state. The aristocracy do not smoke, proof of their virtue and right to rule, while the lower classes are drenched in sin and soot. An England utterly strange and utterly real.

An elite boarding school where the sons of the wealthy are groomed to take power as their birthright. Teachers with mysterious ties to warring political factions at the highest levels of government.  Three young people who learn everything they’ve been taught is a lie—knowledge that could cost them their lives. A grand estate where secrets lurk in attic rooms and hidden laboratories. A love triangle. A desperate chase. Revolutionaries and secret police. Religious fanatics and coldhearted scientists. Murder. A London filled with danger and wonder. A tortured relationship between a mother and a daughter, and a mother and a son. Unexpected villains and unexpected heroes. Cool reason versus passion. Rich versus poor. Right versus wrong, though which is which isn’t clear.

This is the world of Smoke, a narrative tour de force, a tale of Dickensian intricacy and ferocious imaginative power, richly atmospheric and intensely suspenseful.”
–Goodreads

If the book’s blurb doesn’t immediately take you captive then you must be a tinge mad because it contains everything required of a desperately good read.

This slanted world of good and evil trods along at a brisk English pace. The story moves along at its own dignified speed, beginning with a frantic wake from sleep and a long-time tradition of midnight interrogations amongst the boys. Confess your sins or the smoke will do it for you. Either way you will be punished for your sinful spirit, as are the rules of the school.

I found Vyleta’s writing to be seamless to fall into and roll along with its current. He definitely has a strong talent for storytelling, at least via writing. One can immediately tell that this story is not American and not of this time for the style is quite different, more somber, frank, evenly paced, and flowing. It’s perfect for the telling of this bleak mysterious account of Thomas, Charlie, and Julius as they rebel, stumble, and pry their way into startling truths about their lives.

Vyleta writes a thrilling fantasy that seeps into your skin holding you caught in its addictive grasp as it transports you back a century into the English countryside at a boys school, a pompous hierarchy amidst a world where sin and wickedness reveals itself in the form of smoke and soot. One cannot hide their evil thoughts or dark deeds because it pours out for all to witness. Intriguing, chilling, mysterious, and quite English, Smoke rapidly ensnares the reader and draws them into its withered world.

This story could easily fit into the themes of Midsomer Murders, Charles Dickens’ tales, Agatha Christie’s works, or the like but with its own twist of unsettling fantasy. It’s cover art as well describes the book precisely. The art is actually an impressionist painting by Claude Monet – Houses of Parliament, Sunset – (which I only know because I’m an occasional art nerd) and it astutely conveys the mood of this book. Yes, I quite enjoyed this story. It’s a good one for a dreary day with a cup of coffee or tea and a blanket to curl up with.

Dan Vyleta is the son of Czech refugees who emigrated to Germany in the late 1960s. After growing up in Germany, he left to attend university in the UK where he completed a Ph.D. in History at King’s College, University of Cambridge. He now calls Canada his home. When not reading or writing novels, Dan Vyleta watches cop shows, or listens to CDs from his embarrassingly large collection of Jazz albums. An inveterate migrant, Dan Vyleta was last seen in the Great Lakes region.

Last post of 2019!! I personally LOVE supporting smaller authors whether that’s self-pub., small pub., whatever, and every year I post a list of my favorite indie reads (so you should definitely visit my blog for this year’s list). As my last post for 2019, I’m sharing a picture of not only an indie read, Crooked Raven by @talisjones, but ITS MAP. 😍 I loooove maps in books (even if I rarely use them lol). So I have two questions for you: 1) What is an indie book you’d recommend? 2) What’s your favorite book map? 🎆Happy New Year’s Eve!!! xo Pooled Ink P.S. I have an important update that I will be posting in a few minutes on my blog with regards to my plan for 2020. I’m a bookaholic and that won’t change but I’m trying to find a new balance for the new year. 😊📚💕 #bookstagram #crookedraven #oneiroi #talisjones #yafantasy #indiebook #indieauthor #pooledinkreviews
Merry Christmas!! 🎄 As usual I’ve posted my Christmas message on my blog and this year it includes an important update for 2020. Thanks to all you lovely book fans for a fantastic 2019 and I can’t wait to see what new stories 2020 will bring! #bookstagram #chroniclesofnarnia #bookseries #merrychristmas #pooledinkreviews
My review for Kingdom of Ash, the epic finale of the Throne of Glass series by @therealsjmaas, is now up on my blog! It was gut-wrenching yet fiercely victorious. Huzzah! I told you that this month has been all about finishing series I began and this is the last of three that I started when I first opened my book blog in 2015 and have now at last concluded. I’ve always had a soft spot for fantasy and this series blew me away. I can’t wait to see what Maas will write next! Any suggestions for while I wait? #bookstagram #throneofglassseries #queenmaas #fantasy #fae #kingdomofash #pooledinkreviews
Red Rising Trilogy by @piercebrownofficial 🌙 December is my month of series finales! Last week was a paranormal/urban fantasy, this week is science fiction, and next week...you’ll just have to wait! As always my reviews for these books are up on my blog! (Link in bio) I began Red Rising not at all knowing what I was getting into, I just knew that the first page reeled me in so I bought the whole book. I don’t really think there was any way to be prepared for this series haha but somehow I survived! I still love my YA comfort zone but I gotta say this has been one worthwhile foray into adult fiction and has me curious for more so comment with any recommendations you might have! #bookstagram #redrisingtrilogy #piercebrown #pooledinkreviews (P.S. I dipped my fingers in some bloody paint to draw a wolf for the Howlers and yet for some reason it slowly shifted into General Grievous 😆 ah well, whatever, it’s at least still space related right?)
The Dark Gifts trilogy by @drvictoriajames has left me speechless. Epic from start to finish, beautifully complex, featuring villains unflinchingly cruel, and set at a pace so blinding I’m winded. Taking place in an alternate modern day England where those with Skill (sort of like magic) rule the rest, rebellion is brewing but a lot of blood will shed and nightmares will birth before a new dawn can break. If you’re a fan of the TV show The Man in the High Castle (suuuuper fantastic show by the way) then you might like this series. My reviews for all three books can be found on my blog! #bookstagram #darkgiftstrilogy #gildedcage #tarnishedcity #brightruin #vicjames #pooledinkreviews #urbanfantasy
One Day at Disney is available now!! You can buy the book or watch the documentary on Disney+ (or even better, do both!) ✨”You can dream, create, design, and build the most wonderful place in the world, but it requires people to make the dream a reality.” -Walt Disney ✨Thank you so much to @disneybooks for sending me a copy of this beautiful book! ✨Hop on over to my blog to find out more about this exciting look into the vast array of people working behind the scenes to bring the unique and groundbreaking magic that is Disney. #OneDayAtDisney ——— The book and documentary both released on December 3rd but unfortunately I was too sick to post so I apologize for this delayed announcement!