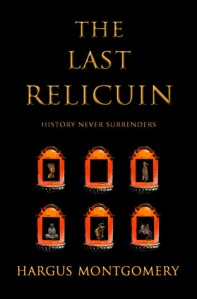 “In the 22nd century, twelve percent of the world’s population chooses history. Safe inside the guarded borders of living museums, museum dwellers resist attempts by Metro leaders to seize their lands and force them back to the cities. When Alexander Kane, (son of a powerful Metro Senator) leaves the protection of the City to enter the Federal Museum Academy, he becomes the target of a growing political struggle. Crossing borders into the 12, 18th, and 20th centuries, The Last Relicuin follows three generations of a family torn between the past and the future.”
–Goodreads

This book was quite long, I must say. It succeeded in holding my interest but the plot unfolded at a steady, plodding pace. This book was not what I had expected but still proved to be intriguing in an off-kilter history-buff sort of way.

The Last Relicuin is set in the 22nd Century, a future where people live in great glass cities constructed above the crumbling foundations of the old cities and spend most of their lives in virtual reality. The world is always having some great debate or another and in this future it is a debate over time itself, in a way. Past (museums) versus Future (mainstream). And by ‘museum’ I don’t mean some building stuffed with ancient artifacts and little description placards. I mean hundreds and hundreds of square acres where people live in total time-period immersion.

You can’t judge other cultures without trying things. –Professor Kerwin

I don’t think we should keep ourselves stuck in the past but I also don’t think we should ever forget the past. But then while the glassers/mainstreamers want to eliminate all museums and force those people to live in the cities, the FMA and the dwellers don’t want to eradicate the glass. The museums just want to be left alone and allowed to exist. The dwellers want the people to be free to choose to live or explore the different cultures and time-periods of history. And personally I think that’s awesome. How cool would it be to go through a security border and then come out the other side in a completely different time period? Although it might actually be rather scary seeing as the FMA aims for absolute authenticity and some time periods were pretty violent.

When all the adventure in a man’s life was virtual, reality was frightening. –Agent Gibbs

Anyway, political debate aside this book is structured on a really cool and interesting concept. It sort of takes the movie Night at the Museum (starring Ben Stiller) to a whole new level.

Kind of a weird loop of thinking though: forget your past so you can live in the past. Because you live in the present day, which is the future to the past, so to live authentically in the past you must forget the future, which also is your personal past. That’s a bit of a mind-bender if you think about it too long.

Most books tend to hone in on a crucial or particular period in a character’s life but this book not only covers broad strokes of Alex Kane’s life but it expands beyond it. It begins when Alex is 20 years old and decides to attend the Federal Museum Academy. From there the story brushes across time skipping the in-betweens and pausing at the pivotal moments in Alex’s life. Even after Alex leaves the story, the story doesn’t leave Alex.

What begins as a simple story about a young man trying to discern his future despite the political scandal it may cost grows into a monster of its own. Alex Kane is the son of a powerful U.S. Senator who has a very fierce anti-museum platform. The moment Alex decided to apply to the Academy things were only going to escalate significantly. War may have been coming for a long time now but Alex’s private decision has been twisted into a trigger no one could have guessed.

The story takes us to several different places and we follow the paths of many different characters. We meet Alex Kane, his wife Katrina, his son Thomas Kane, Tom’s best friend Jack, FMA Professor DeLoretta, FBI Director Javits, Andria an FBI agent gone native, Tony a Relicuin, as well as an assortment of dwellers, Readers, Glassers/Mainstreamers, pawns, and leeches. We only stay in the glass city of Chicago for brief glimpses but the pages expand upon the 20th Century America museum, 12th Century France museum, and even touches on a 17th Century Pacific Island museum as well as a Native American museum. This book covers an array of times and cultures all spiraling out of control in the present. If the government wants to shut down the museums then the museums will fight for independence.

They might look different, but they’re not stupid. –President Sullivan

Look, this book is pretty long and as interesting as it was it’s not what I would consider an adrenaline rush. But the writing is quite good, the concept is immersive, and the characters never once fell flat. I don’t think this style of book is for everyone but it might be for you.

The Last Relicuin is a steady complicated read overflowing with history, injected with the grim future, and ignited by an assassination. This is a story of life, love, past, future, corruption, authenticity, tough journeys, and political intrigue. What begins as a simple search for belonging twists quickly into mystery thickly woven with lies, murder, scapegoats, and a call for war. Recommended for any reader seeking a story where history undergoes a full-scale FBI investigation.

“The best writing advice I ever received was to shut up and listen.” -HM