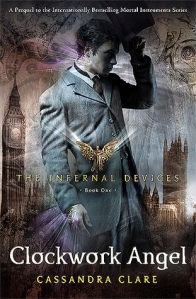 “In a time when Shadowhunters are barely winning the fight against the forces of darkness, one battle will change the course of history forever. Welcome to the Infernal Devices trilogy, a stunning and dangerous prequel to the New York Timesbestselling Mortal Instruments series.

The year is 1878. Tessa Gray descends into London’s dark supernatural underworld in search of her missing brother. She soon discovers that her only allies are the demon-slaying Shadowhunters—including Will and Jem, the mysterious boys she is attracted to. Soon they find themselves up against the Pandemonium Club, a secret organization of vampires, demons, warlocks, and humans. Equipped with a magical army of unstoppable clockwork creatures, the Club is out to rule the British Empire, and only Tessa and her allies can stop them…”
–Goodreads

O! Be still my fluttering heart!

I have written a review for City of Bones (The Mortal Instruments #1) in which I discuss my fascination with this world that Clare has crafted. I also mention how I only read the first three books in The Mortal Instruments series and never had a strong desire to go further. Well, fast-forward to 2016 and I find myself in a tiny little New & Used bookshop on the coast of Carolina and what do my eyes find but a copy of Clockwork Angel.

Now, I was introduced to The Mortal Instruments by a friend in high school who was a huge fan, but protested the lengthening of the trilogy into a six-book series. Regardless of this disagreement she did dive into the prequel trilogy, The Infernal Devices, and fell in love with them. I simply was too enthralled with the Divergent trilogy at the time to ever bother taking up her recommendation. Later in college a different friend spewed her opinions on the City of Bones movie that had come out and she too sung the praises of The Infernal Devices trilogy. So now two different and unrelated people have confessed that they may even love The Infernal Devices more than they enjoyed The Mortal Instruments. So on that day in that little bookshop I decided to finally take them up on their vehement recommendations. I bought the book.

And alas! Here I am!

I have submerged myself once more into this literary world of demons, angels, and mundanes, but this time I cannot find the will nor any inkling of desire to ever leave again. I became so enraptured with Clockwork Angel that not only did I order the rest of The Infernal Devices trilogy but I also purchased Lady Midnight and look forward to re-reading The Mortal Instruments (but will I ever read all six books? …Perhaps…that remains to be seen).

The Infernal Devices is set in 19th Century London and as one can imagine this setting brings along a certain set of decorum, rules, and diction. If Jace attracted you in The Mortal Instruments then Will Herondale will indeed catch your attention in The Infernal Devices. He is sharp words, dark secrets, heavy burdens, and imprisoned tenderness, all of which stand out against Miss Tessa Gray whom elicits a persona of society-dictated helplessness, good manners, and gentle love.

To toss in a touch of game into the mix there is Will’s parabatai, Jem. At one point Tessa describes Will and Jem as Black and White Knights, and I indeed find this comparison fitting. Will is a swarm of secrets and darkness while Jem is not just unusually pale but has a heart of pure kindness and patience. I adore all of these characters, flaws and all. They are a trio that truly fit together in a puzzle of constant flux as they fly down the current of pressing matters.

The world in this book is beautiful, I felt that Clare did a wonderful job of illustrating the London in her heart whilst weaving it full of Shadowhunters, demons, and Downworlders. I also found it intriguing how simply they view a woman’s ability to be a full Shadowhunter despite the rest of the world’s unequal inclinations. As a modern day female I almost found Tessa ridiculous with her beliefs that a woman’s role was in the home and to serve the men, but that was simply the beliefs back then and it was actually amusing to watch her reactions to Charlotte fighting demons and seeing women in pants.

Furthermore, I found it quite an interesting angle to show more into the world of those who choose to leave the Clave and not be Shadowhunters. In particular, Jessamine. Jessie is indeed that typical wealthy 19th Century female who wants nothing more than a handsome husband and a comfortable fashionable life thereafter. Despite her Shadowhunter blood she wants nothing to do with the Clave or demons or anything of that sort. She merely resides at the Institute because at the present she has nowhere else to go.

Also, I loved how this trilogy is diving further into the world of the Downworlders. Of course the majority focuses on the Shadowhunters, but we see more of the Downworlders’ role in this world. In particular we catch far more glimpses of Vampires and Warlocks (including Magnus Bane, which you may recall from The Mortal Instruments). Really despite one brief glimpse at the start of the book, the Shadowhunters don’t come into play for quite a bit after Tessa’s arrival in London and for those days we are caught in the clutches of a particularly nasty pair of Warlocks.

I found the plot of this trilogy to be quite intriguing and I absolutely cannot wait to continue on. An army of mechanical creatures, enchanted automatons rather, threaten the Institute and for once the Shadowhunters’ angel blood does not give them much of an upper hand. This theme of cogs, experiments, and mechanics lends the series towards a gentle nod in the Steampunk direction without actually being Steampunk. It’s perfect. The action, the romance, the assorted peoples, all of it comes to life springing forth from the page and captivating my imagination from beginning to end.

Truly, reading this book has rekindled the fascination I had with The Mortal Instruments and the world of Shadowhunters. Sometimes it’s all about timing with books. Perhaps my timing was off before but now I am utterly hooked. I applaud Clare on writing a wonderful series that exudes an inspiring show of imagination and creativity. I look forward to reading more.

Spell-binding, exhilarating, dangerous, and proper, Clockwork Angel ignites the beginning of a trilogy written in gorgeously antiquated prose that unveils the lives of Shadowhunters as was in 19th Century London. Familiar surnames, characters, objects, and terms seep from the pages connecting to the modern world as told in The Mortal Instruments. After a bloody bang of a beginning Tessa only wishes to understand her place in this altered world but first they must hunt down those infernal devices.

“Cassandra Clare was born overseas and spent her early years traveling around the world with her family and several trunks of fantasy books. Cassandra worked for several years as an entertainment journalist for the Hollywood Reporter before turning her attention to fiction. She is the author of City of Bones, the first book in the Mortal Instruments trilogy and a New York Times bestseller.”
-Goodreads