“Yearning for her former life as an archaeologist, Australian librarian Dr Elizabeth Pimms is struggling with a job she doesn’t want and a family she both loves and resents.

A royal Olmec cemetery is discovered deep in the Mexican jungle, containing the earliest writing in all the Americas. Dr Pimms is elated to join the team investigating the ancient skeletons found on site. Triumph is short-lived, however, as Elizabeth’s position is threatened by a volatile excavation director, contradictory evidence, and hostile colleagues. With everything working against her, will Dr Pimms find the cause of death for a 3,000-year-old athlete and those buried with her?

With the archaeological intrigue of Elizabeth Peters, forensic insight of Kathy Reichs, and the comfort of a cosy mystery, Olmec Obituary is the first novel in a fascinating new series: Dr Pimms, Intermillennial Sleuth. Really cold cases.”
–Goodreads

Ancient skills, modern rogues, twists and turns: a story worthy of Mr. Twain himself! You are truly a Tom Sawyer, Detective, except that you solve mysteries from across time – an intermillennial sleuth, if you will. –Henry

Well, as of late I seem to have been reading quite a lot within the fantasy genre and so when I stumbled across this book I stopped and wondered. I decided it was time for a switch, and seeing as I’m a huge Agatha Christie fan, I jumped at the chance to give this story a try. I am pleased to report that I was not in any way disappointed.

The story itself had all the youth of Phryne Fisher, the detail of Sherlock Holmes, and the psychology of Miss Marple. Within moments I found myself utterly intrigued, pulled in and held hostage within the mystery.

Of course at first, like the protagonist Dr. Pimms, I saw no inkling of any great mystery besides the usual that accompanies archaeological finds, but soon little clues popped up as certain facts stopped adding up. So not only do we get to work our way through the mystery of the ancient skeletons but we also puzzle out the modern mystery of suspicious archaeologists themselves.

On that note I’ll add that I greatly enjoyed reading the story of the people whose skeletons were found in that ancient burial cave. Although the majority of the book followed Dr. Pimms in modern day, every once in a while the book would slip in a chapter that flashed back to the ancient Olmec people, giving us a glimpse into their lives, culture, and ultimately these females’ deaths. While Dr. Pimms may never know entirely how they died or who they were, we the readers get at least some satisfying closure to those burning questions.

In my opinion the writing was done exceedingly well. Funnily enough the moment I began reading my brain bestowed a posh London accent upon the characters. Then quickly I discovered that they were Australian, not British, so I do apologize for my brain’s mistake, but it is funny how somehow it knew that they were at least not American. Sorry, just a random curious thought (:

Elizabeth Pimms was a well-written character and I liked her. She was impressive, relatable, interesting, and quite real. I found her easy to attach myself to and follow her around as her mind churned endlessly upon the mysteries before her. Besides that it was also quite lovely to get to know her family and co-workers, it helped give her character a sense of realism and completion. Very well done.

As one might expect this book is chock-full of technical terminology relating to the field of archaeology but I didn’t find it difficult to follow at all. I’ve heard of some things but mostly I know very little about archaeology and I found myself doubly intrigued as I learned quite a lot just in the expanse of this one book. Actually, by the end of it, it almost had me considering a career in archaeology or librarianship. Truly I felt that the series concept of solving mysteries both in the present and of the long ago past sold me. If they made this into a television series I would definitely watch it, but for now I’m eager to hunt down some more books.

I thought it was awesome that this book includes recipes!! At the back of the book you’ll find some wonderful recipes for a few of the delicious dishes mentioned throughout the story and I cannot wait to try them! I currently have an awful cold so I haven’t been eating much of anything but my mouth was watering at some of the tasty meals cooked up in this novel!

More? Well, I didn’t know that the back of the book included both a glossary of technical terms as well as a lexicon for the foreign language phrases and words sprinkled throughout, but when I found it I smiled. Very useful, I feel. And I’m sure if I had been given a physical copy of the book I would have discovered it at once…or at least before I made it to the end of my eBook edition. Regardless I absolutely appreciate its inclusion! Very helpful!

And (because there is still more!) Owen includes some recommended additional reading just in case the history and such happened to catch your fancy and you wished to read up on it some more. I think this is wonderful. Honestly, it’s such a refreshing feeling when you can read a novel that is both rivetingly entertaining as well as highly educational. On one hand reading this book has felt like a nice break from my day but I also feel like I just learned quite a lot.

According to the author, Dr. Pimms, Intermillenial Sleuth is a series of archaeo-biblio mysteries: “A puzzling crime or event that requires the application of both archaeological and philogical principles for its explanation. Can involve historic or prehistoric societies, their culture, writing and communication systems, artifacts, or skeletal remains.” In short, some extremely fascinating stuff.

Overall I must say that I thoroughly enjoyed reading all about Dr. Pimms and her archaeological mysteries! Sign me up for the next one!

Riveting, intelligent, utterly intriguing, and with just the right touch of drama, Olmec Obituary kicks off the start to a new and refreshing mystery series that takes long buried secrets lost in history and brings them into the light alongside the roguish endeavors of those around her. If you’re looking for something youthful, detailed, and addicting then look no further. 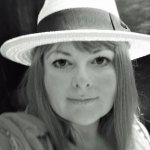 Descended from families strung along the Atlantic fringe, including Scotland, Wales, Cornwall and Spain, L.J. currently lives in Australia.

Trained in archaeology and librarianship, with a PhD in palaeogenetics, L.J.’s interests include writing, ancient cultures and existentialism.