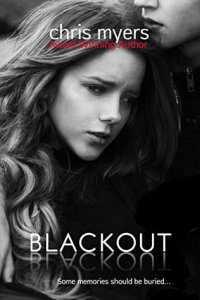 “The blackouts started happening when Teal was eight. There are long periods of her youth she doesn’t remember. She has woken up in strange places, feeling disoriented and unaware of how long she’s been out.

After two years abroad attending a private school and sessions with a top-notch psychiatrist, she’s been deemed cured. The blackouts have ceased, or so Teal thought, until she wakes up in a ditch back home in North Carolina. Dare, the man pulling her broken body from the wreckage, has a restraining order against him. He’s no longer the clean-cut boy she went frog gigging with but road-hardened. His lean, muscular arms, riddled with tats, drag her out of the SUV. She should fear him, but instead, his touch sparks memories that tell her she once worshipped him with all her heart.”
–Goodreads

Well, this book actually had me more intrigued than I thought it would. Oh, and I’m glad that even though it says it’s part of the Lost Girls series it’s actually a stand-alone in the sense that we are told Teal’s story and it both begins and concludes within this one book. I’m glad because I get tired of starting a series I know I probably will never get the chance to finish.

Okay so this book is a supposed to be a thriller and I wasn’t entirely convinced how true that would be but I’m happy to say the author meant it. I found the whole mystery surrounding Teal and her blackouts to be super interesting. Of course I knew her blackouts had to be related to some traumatic memory that her brain is repressing as a sort of safety but apparently it takes them up until now to find a good doctor who helps her navigate this. The whole story unfolds as bits of her memory resurface pushed along by some stalker who knew her long gone mother. It gets creepy and the ending is nothing but an adrenaline rush. Overall the “thriller” aspect captivated me, and yeah the romance wasn’t half-bad either.

There’s two guys interested in Teal, of course, but while Graham is a nice guy he never really has a chance. Despite the serious misinformation that went down at their court trial ten years ago and Dare’s well-tended garden of hatred for Teal, he’s clearly into her and she into him. I get that maybe there was supposed to be some love triangle going on but please, none of us is fooled for a second. This book is a clear-cut ‘good girl falls in love with bad boy’ and no I’m not complaining. If you’re looking for a romance novel full of tension, push-and-pull, history, and definite electricity then you’ll be happy with this.

Whenever there’s romance there always seems to be drama. While most of the drama was good because it was linked to the mystery there were occasional moments of stupid fluff drama where there was a simple miscommunication, assumptions were made, and people stomp around like little drama queens about it until things are finally cleared up (for example, did Dare say he was breaking up with you?).

I’m not going to deny that Dare is quite the interesting catch for sure, but I will say that I feel like the thriller-mystery storyline is what really caught my interest and made this book more than just another romance novel on the shelf.

Overall yeah this book kept me interested and exceeded my expectations. The pacing was quick, the characters were captivating, the plot twisted and escalated with every turn, and I ended up reading the whole thing in one day. So if you’re looking for a romance novel with a bit of a kick then this would definitely be one worth looking into.

(Oh uh, but do keep in mind that this is NA not YA and that there is a distinct difference)

Blackout is a skin-crawling thriller full of tension, mystery, adrenaline, and more than just a dollop of electric romance.

Chris earned a BS in Electrical Engineering and Masters in Engineering from USF with a minor in biology and chemistry with an emphasis in psychology and also attended Centre College in Kentucky. During her early years as an engineer, she designed INUs and PIGAs, yes rocket science, and later worked in cryptography and communications for NSA and other classified clients, but she often found her head in the clouds while taking literature and creative writing classes and dreaming of becoming a fulltime author.
–Chris’ website