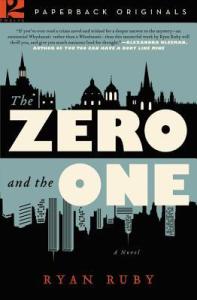 “A gothic twist on the classic tale of innocents abroad, THE ZERO AND THE ONE is a meditation on the seductions of friendship and the power of dangerous ideas that registers the dark, psychological suspense of Patricia Highsmith’s The Talented Mr. Ripley and the intellectual and philosophical intrigue of John Banville’s The Book of Evidence.

A shy, bookish scholarship student from a working-class family, Owen Whiting has high hopes of what awaits him at Oxford, only to find himself adrift and out of place among the university’s dim aristocrats and posh radicals. But his life takes a dramatic turn when he is assigned to the same philosophy tutorial as Zachary Foedern, a visiting student from New York City. Rich, brilliant, and charismatic, Zach takes Owen under his wing, introducing him to a world of experiences Owen has only ever read about. From the quadrangles of Oxford to the seedy underbelly of Berlin, they practice what Zach preaches, daring each other to transgress the boundaries of convention and morality, until Zach proposes the greatest transgression of all: a suicide pact. But when Zach’s plans go horribly awry, Owen is left to pick up the pieces in the sleek lofts and dingy dives of lower Manhattan. Now he must navigate the treacherous boundary between illusion and reality if he wants to understand his friend and preserve a hold on his once bright future.”
–Goodreads

The description for this book really caught my eye, particularly the mention of Patricia Highsmith’s The Talented Mr. Ripley. Although I’ve only seen the movie that mention drew my eyes further down to the rest of the intriguing description. After reading this book I can definitely see the similarities and this book is indeed “a gothic twist on the classic tale of innocents abroad.”

From the beginning we are told of Zach’s death, which only succeeds in drawing us in further, huddling closer to the pages asking how? and why? We know little of either main character, Zach or Owen, yet at once it is felt that their journey was significant and thrilling. Thus we keep reading.

The chapters alternate between the present (post-death; New York) and the past (the beginning of Zach and Owen’s relationship; England). The story focuses rather a lot on a book of philosophy called The Zero & The One (Null und Eins) by Hans Abendroth; a book devoured and cherished by Zach that has now fallen into the hands of Owen. Notes and musings are scribbled in the book’s margins, which Owen puzzles through as he slowly pieces together the recent tumultuous events. Clearly with such a book playing a significant part in Zach’s life, and now Owen’s, it is clear that philosophy plays a large role with the characters. In fact this is constantly demonstrated by Zach’s quick tongue and circuitous debates, not to mention their schooling.

Zach was a fascinating character to read about and his clever duels with mere words as his rapier were particularly fun to watch. It is clear that Zach was the bright burning flame while Owen began as the more hesitant shadow, which Zach draws in gladly. Their friendship escalates and takes them to all sorts of avenues of life as they push boundaries, spin words, and muse over all aspects of life. Such adventure and boldness could only end with a fitting dramatic exit. The ashes of such however are left to Owen to sweep up and mourn through.

Although categorized as New Adult fiction, this book is not quite like many you’ll find on such shelves. The story contains a shade of innocence and youth yet deeper in is actually quite dark, haunting, and mature. It’s spun with an intelligent writing style that is easy to understand but of a distinctly higher caliber that almost gives the story an added weight and age. Despite it’s modern setting, something about this book calls to an older time and this only adds to the foggy atmosphere and chilling exhilaration of its tale.

A captivating gothic-style novel about friendship, boundaries, and fate, The Zero and the One puts forth questions that force both its characters and its readers to push further and not risk looking back. Mysterious, dark, and addicting, this story is a refreshing addition to the NA genre.

Purchase here: The Zero and the One

Born in Los Angeles, Ryan Ruby was educated at Columbia University, Pembroke College, Oxford, and the University of Chicago. He has been a bookseller at a Barnes & Noble in Los Angeles, a tour guide in Berlin, a layabout in New Orleans, and a lecturer in philosophy at the City University of New York. His writing–which includes fiction, philosophy, literary criticism, and political commentary–has appeared in such venues as Conjunctions, The Baffler, Bookforum, Dissent, n+1, The Paris Review Daily, among others. Recently, he has translated Roger Caillois and Grégoire Bouillier from the French for Readux Books. THE ZERO AND THE ONE is his debut novel. He currently lives in Berlin.
-Hachette Book Group