“When sixteen-year-old Ellie Baum accidentally time-travels via red balloon to 1988 East Berlin, she’s caught up in a conspiracy of history and magic. She meets members of an underground guild in East Berlin who use balloons and magic to help people escape over the Wall—but even to the balloon makers, Ellie’s time travel is a mystery. When it becomes clear that someone is using dark magic to change history, Ellie must risk everything—including her only way home—to stop the process.”
–Goodreads

We’re all here because of ghosts. –Felix

I found this book to be drawn around a very interesting idea. Magic red balloons that carry people to safety? I was intrigued. There’s just something so happy and innocent and hopeful about a shiny red balloon, isn’t there? I don’t know, perhaps it’s just me.

I must say that the German song “99 Luftballons” (99 Red Balloons) by Nena popped into my head almost immediately and it kept cycling back into my mind throughout the story whenever they described the balloons carrying someone away. I’m 99.9% convinced that this book had to have been at least partially inspired by this song. There’s just no way it could possibly be that big a coincidence. Not only is it a German anti-war song written in 1984 (during the time of the Berlin Wall) but the lyrics speak so perfectly to the inspiration of this story. (If you are unfamiliar with this song I will post the music video at the bottom of this post)

This book alternates between three different POVs: Benno (1941), Kai (1988), and Ellie (2017). It also focuses on three distinct periods of German history: WWII, the Iron Curtain, and present day Germany. Most of the story takes place in 1988 East Berlin where Kai (a Romani from England) and Mitzi (a native East German) help people escape via magic red balloons and where Ellie accidentally time travels to when she grabs a rogue balloon in her own time period whilst on a school trip abroad in Germany.

Benno’s chapters at first seem random and sporadic, but they have both rhyme and reason the further you read and the more you learn. They are a nice addition and help complete the circle of time and events.

Time traveling is mostly just a literary device used to transport us to 1988 and show us the life of East Germany by the Wall. Well, that as well as this secret magical society of rebels whose sole aim is to free oppressed peoples. The storyline bounces between solving the plot mystery (malfunctioning balloons), taking a few beats for character development (friendships, family, romance), and introducing history in a first person format.

Obviously from the start we are presented with the constant issue of how to return Ellie back to her natural time. This question while difficult technically is very simple emotionally, until soon six months have passed and suddenly the solution is within grasp but the choice has become quite painful emotionally.

I’ll just say it. The ending is not at all what I wanted despite knowing that it could not end any other way. Well, it could have and I sometimes dared to hope, but I get it. I just don’t like it. Although I will say that the ending makes the beginning ever so significant. I had this gut feeling when I finished reading this book and so I flipped back to the beginning and re-read the very first chapter, the scene by the Berlin Wall, and I almost cried. I will never be happy about this ending. But I grudgingly understand it.

Kai was a wonderful character and I loved his relationship with both Mitzi and Ellie as well as his little sister Sabina. Mitzi was awesome and very glittery. Ellie cried maybe just a little too much for me but she was an overall good main character. I really enjoyed watching these three form a dynamic that danced between comrades, family, and friends. It was a bright colorful balloon of its own amidst the dreary grays of East Berlin.

The only thing that irked me was Ellie and Mitzi’s brief argument where neither apologizes because they both think they are right. They never go back and address it, although they continue forwards as friends despite it.

It always comes back to people being evil. And you know what, Mitzi? A lot of evil people are your people. –Ellie

I personally feel that Ellie was wrong to say this to Mitzi and should have apologized, no matter how distraught she was when she said it. She lives in East Germany for a mere handful of months and she thinks she understands history? She thinks she understands the blood chilling fear? Do you know how truly brave one must be to stand against evil? It’s not as easy as books and movies make it seem. People can be weak and cowardly, but not all. Sometimes survival is placed above goodness but don’t pretend to know what your choice would be when you come from a place of blessed freedom. But I get that Ellie is angry on behalf of her people and Mitzi is struggling to separate the sins of her own people.

Germans are not all evil. East Germans are not all evil. People sometimes seem to forget that what happened with Hitler wasn’t new or original and it’s surprisingly far from being the bloodiest event in history. That doesn’t mean it wasn’t absolutely horrible but it’s not the only bad moment/place/people. People suffered similar slaughter in greater numbers under Stalin. Hitler wanted a cleansing but Stalin delivered a bloodbath. Or think of the Romans, the Huns, the Americans… The list of other examples is horrifyingly long.

I get that this book needed to be focused on Germany but sometimes it feels that people get so hung up on Germany’s wrongs that they forget all the others. When you point a finger of guilt it is accompanied by a thumb of fear, and three fingers of hypocrisy pointing right back at you.  Ellie accusing Germans of being evil, of Mitzi’s people producing so many evil people as if it’s bred into them or something is so offensive and wrong and small minded and it seriously annoyed me. I get that she’s frustrated and that she’s not sure how to articulate her anger but that’s just it, it wasn’t articulated well and it wasn’t resolved.

…I guess the main reason why this scene bothered me is that I just can’t believe she’d say this to Mitzi’s face. Mitzi who has done nothing but protect her and befriend her. You cannot blame the children for their parents’ sins.

“I’m not my grandparents…I’m not apologizing to you, Ellie Baum…You can leave—yes, you…But I have to stay…Stop telling me this is the only evil place on earth. Stop telling me that I am evil because of where I am.” –Mitzi

She didn’t ask for my forgiveness, and I wouldn’t have offered it. She didn’t apologize, and neither did I. We didn’t say anything more. There was nothing more to say. –Ellie

Okay, sorry I went off on an angry tangent. It’s just…self-righteous people get on my last nerve sometimes. I had to rant a bit because that’s what I do on my blog. I vent when I’m annoyed, gush when I’m enthralled, and yawn when I’m bored. But please don’t get too hung up on it. Seriously. Their argument was a small moment in the middle of a good book. It gives you food for thought, I suppose.

Overall this book was a good story, full of hope, love, creativity, and many red balloons. It’s a good book. I just happen to be tired of reading sad stories or watching sad movies at the moment, so the bittersweet ending left me dissatisfied. But it’s still a very good story, honestly. Check out my recommended reads below and seriously, listen to the song “99 Red Balloons” even if you already know it. It’s pretty catchy.

The Girl with the Red Balloon is a tale of rebellion, magic, and hope that flies over the walls of history. Shiny, unique, and brave, it reminds us to remember. 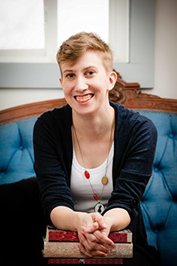 Katherine Locke lives and writes in a small town outside Philadelphia, where she’s ruled by her feline overlords and her addiction to chai lattes. She writes about that which she cannot do: ballet, magic, and time travel. She secretly believes all stories are fairytales in disguise. Her YA debut, THE GIRL WITH THE RED BALLOON, arrives September 2017 from Albert Whitman & Comapny.
-Goodreads

3 thoughts on “The Girl with the Red Balloon”