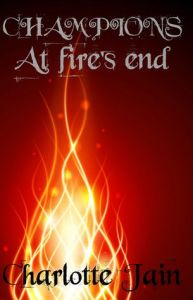 “Seventeen-year-old best friends, April and Kyle, are thrown into the final battle of the Titan and Olympian war. Locked into an endless struggle, the Immortals have finally reached a solution – bestow mortal Champions with control over the elements to wage their final campaign.

Bestowed with control over fire and water, April and Kyle were raised by Immortals with a single purpose – win the war. After finally uncovering the remaining Champions’ identities, April and Kyle must launch themselves into their final battle for survival. Winner takes all. But the Immortals are growing restless, and time is running out.”
–Goodreads

Thank you, Charlotte Jain, for reaching out to me with your book! You had me instantly intrigued with its description and I was only too happy to read it for a review.

This book unfolds such an interesting idea and I found it wonderfully entertaining how it draws from Greek and Roman mythologies. The story opens from Hermes’ POV as the High Council at last agrees to send out four flames each with certain powers to be gifted to mortal children in order for them to one day wage war on behalf of the warring gods to at last settle their disputes.

Quickly we are drawn into the story, not the archaic times of such myths but the fresh modernity of Kyle and April’s time. It is from their alternating POVs that this book is told.

It does not take long for other characters, both mortal and immortal, to be introduced and woven into the constantly complicating plot. War has not yet come but the immortals are restless for its outcome. We watch as Kyle and April hunt down the other two mortals gifted with a flame and hurry to save the world, balancing their personal desires with the stake of the innocents around them. Sacrifice and duty becoming far too familiar.

The world-building is fast-paced but detailed just as with the characters. Such intriguing personalities unfold throughout the book and I found the interactions between mortals and immortals just as entertaining.

An exciting read for sure, I enjoyed reading this tale of gods and humans. I admit that there were times that I felt a bit confused or I didn’t quite connect with the characters, but I think the author has a very vivd imagination and that can be difficult to capture on the page. Regardless, it was an interesting story.

Fiery, startling, thrilling, and fun, At Fire’s End begins a series of champions with a long journey ahead. A recommended read for any who enjoy mythology-inspired stories merged into our mere mortal world.

Charlotte Jain is an Arts graduate from Melbourne and the author of the Champions series. As well as creating exciting tales filled with magic and adventure, Charlotte also enjoys travelling the world and snuggling up on the couch watching movies.
-Jain’s Website