Daughter of the Burning City by Amanda Foody

“A darkly irresistible new fantasy set in the infamous Gomorrah Festival, a traveling carnival of debauchery that caters to the strangest of dreams and desires.

Sixteen-year-old Sorina has spent most of her life within the smoldering borders of the Gomorrah Festival. Yet even among the many unusual members of the traveling circus-city, Sorina stands apart as the only illusion-worker born in hundreds of years. This rare talent allows her to create illusions that others can see, feel and touch, with personalities all their own. Her creations are her family, and together they make up the cast of the Festival’s Freak Show.

But no matter how lifelike they may seem, her illusions are still just that—illusions, and not truly real. Or so she always believed…until one of them is murdered.

Desperate to protect her family, Sorina must track down the culprit and determine how they killed a person who doesn’t actually exist. Her search for answers leads her to the self-proclaimed gossip-worker Luca, and their investigation sends them through a haze of political turmoil and forbidden romance, and into the most sinister corners of the Festival. But as the killer continues murdering Sorina’s illusions one by one, she must unravel the horrifying truth before all of her loved ones disappear.”
–Goodreads

A wandering city? An enchanted circus? Murders, mystery, and mayhem? Yes, thank you, and I’ll have some romance on the side.

Amanda Foody has managed to craft a story full of dazzling enchantment, familial strength, and chilling horror. She’s also managed to hit several buzzwords that had me seizing her book right off the shelf: fantasy, carnival, mystery, and more.

Let me begin with the ending first. This book is *drum roll* a standalone! It is too difficult to find standalone YA fantasy books and I was very happy to have stumbled across this one. Another celebratory factor is that this book has a happy ending. Huzzah! Oh there is tragedy indeed as well as enough tears from Sorina to fill a bathtub, but when all is mourned and puzzled it’s a happy ending that ties up (most of) those nasty loose ends.

I’ve got to be blunt for a moment, it’s rather hard to write a mystery that goes on for almost 400 pages. I admit I was less than halfway through when I began growing rather impatient and tired of all the vagueness and stabs in the dark. It began to feel like a never-ending trail covered in fog and distraction, but not in a good way. I was growing bored.

In fact to stretch the mystery this long the story does seem to bring up a lot of extraneous information, plot lines, and motives to help “confuse” both Sorina and the reader with regards to the truth behind the murders, but honestly it felt distracting in a way that had me bored and irritated. I understand that it was supposed to distract from her investigations and to keep her from uncovering the truth, but it did so in a way that had me feeling impatient, un-fooled, and ready to skip to the ending and be done with it.

Misdirection is a large factor in mysteries but in this book it often came across as random and unnecessary. For example, there is a very rushed scene where Sorina is to kidnap a suspect from a royal wedding. Very exciting it sounds however this entire plotline was not only constructed to distract Sorina, but it’s so sporadic and hurried that it rather detracts from the story’s focus. In some ways I felt that this could have been two separate book ideas: one about murders in a magical circus, and another about a magical wandering city destined to bring peace amongst the mountain kingdoms (this plot line was left very vague and loose-ended by the way).

A choice had to be made and while the murders were technically selected as the main focus, the plot just couldn’t seem to let all the political espionage go. I think it would have been perfectly acceptable for this book to have chosen a sharper focus over too much dazzle and creative splash, for sometimes it’s the more simple ideas that strike the hardest.

Furthermore, some of the clues and answers were rather obvious to figure out and the constant predictability was dull, but then again I’m sitting calm and comfortable on my bed and not grieving in the midst of chaos like Sorina is.

Okay, that’s it. I’m done with my complaints.

Truly I felt that this was a fun and entertaining read with just enough of a magical and creepy vibe to keep me going. Overall there were some really cool concepts, characters, and is simply an original story that had me fascinated and entertained from the very beginning. It’s full of inspiration and intrigue from the grandest plot device to the tiniest detail. And the cover is just beautiful!

Sorina’s abilities, as well as the entire nature of her family, were so original! Each member of her family, despite being illusions, held unique personalities that were vibrant and easy to attach to. As for Sorina herself I liked her okay but did struggle with how indecisive, impulsive, and fickle she could be. It was maddening at times.

But if you’re looking for your next read after Stephanie Garber’s Caraval or Erin Morgenstern’s The Night Circus then this might be a good choice.

Beware the city that burns with souls, entices the nightmares, and celebrates the strange. Filled with death and deception, become beguiled by horrors, softened by sorrow, and yearning for fun as you read the tale, Daughter of the Burning City. 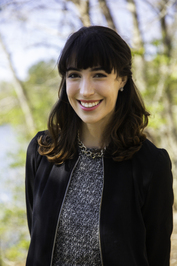 Amanda Foody has always considered imagination to be our best attempt at magic. After spending her childhood longing to attend Hogwarts, she now loves to write about immersive settings and characters grappling with insurmountable destinies. She holds a Masters in Accountancy from Villanova University, and a Bachelors of Arts in English Literature from the College of William and Mary. Currently, she works as a tax accountant in Philadelphia, PA, surrounded by her many siblings and many books.

DAUGHTER OF THE BURNING CITY is her first novel. Her second, ACE OF SHADES, will follow in April 2018.
-Goodreads

3 thoughts on “Daughter of the Burning City”