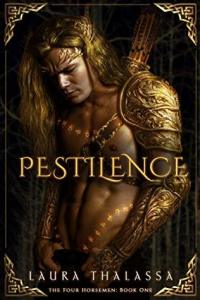 When Pestilence comes for Sara Burn’s town, one thing is certain: everyone she knows and loves is marked for death. Unless, of course, the angelic-looking horseman is stopped, which is exactly what Sara has in mind when she shoots the unholy beast off his steed.

Too bad no one told her Pestilence can’t be killed.

Now the horseman, very much alive and very pissed off, has taken her prisoner, and he’s eager to make her suffer. Only, the longer she’s with him, the more uncertain she is about his true feelings towards her … and hers towards him.

And now, well, Sara might still be able to save the world, but in order to do so, she’ll have to sacrifice her heart in the process.”
–Goodreads

*Thank you Laura for inviting me onto the ARC team for your latest novel!*

This is EXACTLY why waiting until a series is completed is the better way to go because otherwise you’re left in utter AGONY.

Hey, so does that mean you liked it?

I will be very honest and say that when Laura first shared her idea about writing books about the four horsemen of the apocalypse I was, um, skeptical. Not because I doubted her writing talents but because I simply didn’t have the creative vision to see how this often retold story could be done any different. I dunno, but the idea didn’t excite me quite as much as I wanted it to. But then I got to read teeny tiny excerpts and it was enough to draw me in and now after having read the entire book I am 100% sold. This book has me ready to flip right back to page one and start reading it all over again. I’m trying to remain calm but honestly I need the sequel, War. Now. No, I needed it yesterday.

I’ve said it before how “romance novels” aren’t exactly my thing and those that I do like draw my interest because they encompass so much more than just the romance. What I really like about Thalassa’s books (at least those that I’ve read thus far) is that she nails this combo fabulously. Yeah the main thread in the story is the inevitable romance between two characters but then there’s just so much more than that, and that is what elevates it for me above just a “romance novel”.

So yeah, we all know that Sara and Pestilence, the first horseman, will somehow fall in love, what we don’t know is how that could possibly happen because, well, Sara is a human and Pestilence is a being sent by God to destroy humans. Do you see the slight problem there? But Thalassa has an incredible way of not brushing aside the enemy aspect and instead forces her characters to deal with the obstacles and truths between them. The journey from enemies to lovers is not one that is rushed, glossed over, or unjust to the truths of either character.

They don’t “hate” each other, they hate each other, but as they journey across the continent spreading the plague to end humanity they each realize something deeper about theirselves and the world and most importantly what “humanity” means. I also loved how this wasn’t a book about compromise or victory, really. Pestilence had a job to do and Sara had her people to defend, but neither was right and neither was wrong, they simply had to open themselves up to understanding, to possibility, to choice. I definitely swooned at the romance (duh) but more than that I was pulled in by the examination of humanity.

The character work was really great (in my humble opinion). Sara’s sarcasm and unfiltered way of speaking was at times fantastically amusing and at other times simply compelling. Mostly her entire personality just shone through the page as a fantastically relatable example of a modern twenty-something that contrasted perfectly against Pestilence, a being who has only just begun to understand what being human means. Sara was great. She didn’t always have the answers, she didn’t always have the words, she didn’t always have the right responses, and I loved reading the story from her POV because of it all. Her fear felt tangible, her compassion was moving, and her snark kept me smiling. Gosh, Thalassa, do you even know how to write a boring character??

And Pestilence is, well, pestilence but now sent to earth in human form and just because he has a human body now doesn’t mean he knows what to do with it. His innocence when it comes to even the basics of humans was a really interesting character twist honestly, and it actually helped make this monster more endearing. He cannot die, he does not need to eat, he does not weaken in the elements, etc. so he must learn each frailty of the human body through Sara, and soon he finds himself learning the complexities of the heart. Being forged into a human body has not only forced him to understand the maintenance and desires of humans, but it’s also caused a shift in his perspective of them.

Beyond the romance I also thought the world-building was well done. The different reactions to the Apocalypse were realistic and compelling, as was the brutal truth of Pestilence and his purpose. (Ruth & Rob?? *cries* That elderly couple will give you goals you can only dream of achieving).

I also appreciated how the story didn’t shy away from the origin that God exists and that He triggered this ending by sending the Horsemen to earth. Furthermore that God wasn’t some two-dimensional villain. God long warned humanity of punishment, an ending to come, but He doesn’t send the Horsemen out of hate and He doesn’t leave humanity without a chance to redeem itself and alter their fate. God wasn’t the focus of this story but He wasn’t debated, altered, ignored, or simplified either. Idk but the Bible describes God as merciful and just and the type of guy who has plans for good even when we humans can’t grasp the bigger picture (although the Apocalypse seems pretty grim and finite lol). I dunno, but technically God plays a pretty big role in the traditional story of the four Horsemen so it makes sense that He be a presence in this story as well. *shrugs* I thought it was well done.

Overall I really loved reading this book. Color me mildly surprised but enthusiastically pleased lol. (I mean, will she ever write something I don’t enjoy reading?). If you’re not into romance of any sort then don’t bother I guess, but if you’re searching for a good romance that brings so much more along with it then I’d suggest giving this book, or maybe one of Thalassa’s other books, a try. Her writing really clicked for me and now I eagerly await each new release. Hopefully you have an author or two that’s like that for you.

The Apocalypse has begun, Pestilence has completed his purpose, and War now awakens. This gripping beginning of the End is a beautifully compelling story that explores the many depths of humanity and the truths it bares when death looms unyielding. Unforgiving in its realism but merciful in its heart, this is but the first wave of the Apocalypse, and it will have your heart pounding for more.

Found in the forest when she was young, Laura Thalassa was raised by fairies, kidnapped by werewolves, and given over to vampires as repayment for a hundred year debt. She’s been brought back to life twice, and, with a single kiss, she woke her true love from eternal sleep. She now lives happily ever after with her undead prince in a castle in the woods.

When not writing, Laura can be found scarfing down guacamole, hoarding chocolate for the apocalypse, or curled up on the couch with a good book.
-Goodreads