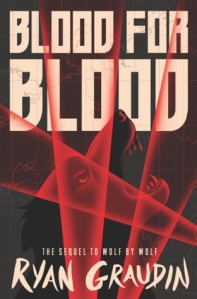 For the resistance in the Third Reich, the war may be over, but the fight has just begun. Death camp survivor Yael, who has the power to skinshift, is on the run: the world has just seen her shoot and kill Hitler. But the truth of what happened is far more complicated, and its consequences are deadly. Yael and her unlikely comrades dive into enemy territory to try to turn the tide against Hitler’s army, and there is no alternative but to see their mission through to the end, whatever the cost.

But in the midst of the chaos, Yael’s past and future collide when she comes face to face with a ghost from her past, and a spark with a fellow rider begins to grow into something more. Dark secrets reveal dark truths and one question hangs over them all—how far can you go for the ones you love?”
–Goodreads

Book One: WOLF BY WOLF

I am feeling so very upset. Many emotions are stirring within me. I’m not…shocked. But my stupid “happily ever after” heart can’t help but feel hurt, disappointed. But I mean come on, this is a story about if the Nazis won the war so a happy ending was never really an option. Fear not (because I can already tell you’re starting to back out) the good guys win. Of that I am also not surprised. But just because the good guys win the revolution doesn’t mean everyone you’ve grown to know and care for will win with them.

Plenty of deaths, plenty of betrayals, and plenty of fear fills these pages and yet the ones that hurt most are those from characters you let yourself care about.

After enduring the brutal motorcycle race in Wolf by Wolf we get to know Yael, Adele, Felix, Luka, Henryka, Miriam, and so many more. We see these happy faces and learn the dark truths hidden beneath them. Some hide secrets of rebellion, some are blinded by honor, but they all bear the weight of some pain or another. In this book we pick up right where we left off in the first book, with Hitler’s assassination, except this time we get to view it from different eyes.

It is perhaps these chapters that make the betrayals and deaths all the more painful to bear. The more you learn about each person, their pasts, their minds, their families…the more you learn the more your heart breaks because we’re all just human in the end, products of circumstances and chance.

I won’t spoil anything for you but the plot in this book in broad strokes is that Yael is on the run after having killed Hitler on live TV with Adele’s face worn as her own and this treasonous act has not only signaled widespread rebellion but it has inadvertently caught Luka and Felix in its tide. The three of them flee Nazi clutches trudging through snow, staving off hunger, battling deep wounds, and each with only one goal in mind. As they get closer and closer to the resistance headquarters they each must make a choice and with every step forwards it will become more unbearable to choose.

There are only two books in this series. It’s but a duology and yet that is all that is needed. No moment is wasted, no moment is cramped. The plot kicks off and races with heavy fear and new strengths from start to finish. I think I may have enjoyed this book even better than the first one, although the ending really hurt. I should have expected it, and a part of me did, but…what can I say? I’m a sucker for happy endings and I’m easily upset when they don’t come to fruition.

But you should read this series.

Blood for Blood is a final battlecry in this surprising duology. It’s a historical fiction like no other. It takes a moment in history that is so horrifying and painful and manages not only to maintain its truths and depths but to also craft together an intricate and intriguing What if? Burning with three young lives forever entwined, choices are made and blood is the call. Prepare for anger, grief, elation, disbelief, and an entire slew of messy restless emotions. Because while the characters make it uncomfortably personal, the foundations are all true and when you strip away the fiction all you’re left with is the raw truths of what humanity has been, is, and persists on becoming.

P.S. As I mentioned in my review of Wolf by Wolf, a good pairing with this series is the Amazon TV show Man in the High Castle.

Check out the rest of the series: Wolf by Wolf (book one)