“On a floating junkyard beneath a radiation sky, a deadly secret lies buried in the scrap.

Eve isn’t looking for secrets—she’s too busy looking over her shoulder. The robot gladiator she’s just spent six months building has been reduced to a smoking wreck, and the only thing keeping her Grandpa from the grave was the fistful of credits she just lost to the bookies. To top it off, she’s discovered she can destroy electronics with the power of her mind, and the puritanical Brotherhood are building a coffin her size. If she’s ever had a worse day, Eve can’t remember it.

But when Eve discovers the ruins of an android boy named Ezekiel in the scrap pile she calls home, her entire world comes crashing down. With her best friend Lemon Fresh and her robotic conscience, Cricket, in tow, she and Ezekiel will trek across deserts of irradiated glass, infiltrate towering megacities and scour the graveyard of humanity’s greatest folly to save the ones Eve loves, and learn the dark secrets of her past.

Even if those secrets were better off staying buried.”
–Goodreads

Jay Kristoff is one of those cool authors who can cross genres with ease. Most authors tend to blossom within a certain genre or element that carries through all their writing but Kristoff can go from total sci-fi geek to high fantasy panache in a heartbeat. LIFEL1K3 was an enticing mash-up of Kristoff’s flowing prose and a gritty futuristic world teeming with battle bots, cyborgs, androids, and more.

This story was catchy and far different from anything I’ve been reading lately so while for a moment I was thrown a bit out of my current reading rhythm I quickly found my footing and enjoyed the wild tale spun before me. One of the standout features is the slang. Personally I found the slang and general speech patterns that are embedded throughout the book to be really fun and felt that they added a gritty but distinctly sci-fi edge or flavor to the story. I can certainly see how it might irritate people though because it’s not just the occasional word, it’s an entire way of speech. This is a future U.S. and with the political, economic, and cultural changes that come with the passage of time so do we see linguistic trends ebb and flow. I thought it was pretty cool how Kristoff took up the challenge.

An entire atmosphere is created in LIFEL1K3 from the world-building to the characters to the diction to the action. I can absolutely see this becoming some sort of cool launching pad for a movie or TV show. It has a Mad Max vibe with an elegant Kristoff twist. I’m not sure if this book is for people who generally shy away from sci-fi but it’s entertaining and I wouldn’t rule it out.

Battle bots, conspiracies, romance, and snarky robotic sidekicks. What more could you want? 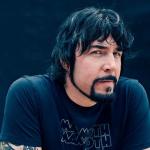 Jay Kristoff is the #1 international, New York Times and USA Today bestselling author of THE NEVERNIGHT CHRONICLE, THE ILLUMINAE FILES and THE LOTUS WAR. He is the winner of five Aurealis Awards, an ABIA, has over half a million books in print and is published in over thirty five countries, most of which he has never visited. He is as surprised about all of this as you are. He is 6’7 and has approximately 12,000 days to live.

He does not believe in happy endings.
-Goodreads