TODAY IS THE DAY!!! YA Fantasy CROOKED RAVEN, the first book in the Otherworld Trilogy by debut author Talis Jones, is OUT NOW! I was lucky enough to read an eARC and as a total fantasy lover I gotta say I’m very excited to see where this story goes next. It’s a bit Peter Pan meets Game of Thrones in Narnia, which obviously had me sold right from the start ⚔️🔮 Keep reading for an exclusive excerpt, playlist, a fan trailer, and more!

“Sometimes you must let go of who you were to
embrace what you could become.”

“And if that damns me to Hell?” she asked.

He smiled. “Then we shall meet again.”

“Crooked Raven launches a breathtaking tale of two siblings who will fight through Hell to save one another. Flowing with beautiful prose and a plot that both burns and delights, this is a must read for fantasy lovers.”
-pooled ink

Every fairy tale and story they were told as children simply ended with the defeat of the wicked witch or evil dragon and then a glossy final phrase of “and then they lived happily ever after.” But they were never told exactly what became of the hero after the quest was completed or after the prince had been crowned king. But the battle had been won. They could not prolong fate any longer. It was time to find out just exactly what hid entailed in those famous words: Happily. Ever. After.

His eyes stirred something in her memory, they felt somehow familiar…

Shaking herself she shifted her attention to the music. He played a dark alluring tune that had all four of them falling further and further into deep thought entranced by the music. The song came to a delicate close with the last note lingering and lonely then suddenly, without looking, without ever raising his bowed head and just as the note died out, the musician seized a knife resting on the piano’s music stand and flung out his arm gracefully delivering a single deadly blow. A reedy fellow dressed in a gaudy checked suit fell out of the shadow he had been lurking in crashing to the floor dead. The knife stood wedged in his heart and a switchblade clattered out of his lifeless fist.

The pub cowered silent. Adrianna was stunned speechless, snapped out of her peaceful reverie, and didn’t seem able to tear her eyes away from the bloody prone figure. Suddenly shattering the silence Sarai leapt up exclaiming, “What the blood?”

The man stood up and approached the corpse unperturbed as he reached down and unstuck the blade wiping the blood casually on the man’s trousers before holstering it into a strap about his thigh. He approached Sarai’s table in just a few lithe steps and winked standing scarcely a foot from her nose. “Rough place,” he shrugged. 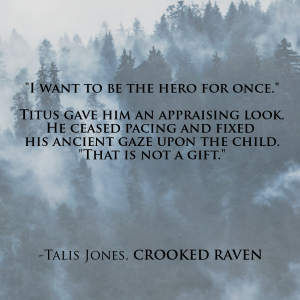