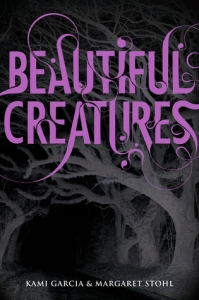 “Lena Duchannes is unlike anyone the small Southern town of Gatlin has ever seen, and she’s struggling to conceal her power, and a curse that has haunted her family for generations. But even within the overgrown gardens, murky swamps and crumbling graveyards of the forgotten South, a secret cannot stay hidden forever.

Ethan Wate, who has been counting the months until he can escape from Gatlin, is haunted by dreams of a beautiful girl he has never met. When Lena moves into the town’s oldest and most infamous plantation, Ethan is inexplicably drawn to her and determined to uncover the connection between them.

In a town with no surprises, one secret could change everything.”
–Goodreads

The small town southern charm combined with paranormal storms brewing in the skies is spun beautifully in this book. The way Ethan’s voice narrates the story like a Carolina lullaby made time still as I slipped into the story strolling through its pages.

This series is very popular and yet I hadn’t read it before now. I have however seen the movie a few times since it was added to Netflix and after having read the book I think they did a good job with it. The upside to reading the original book is that you obviously get so much more. More character, more plot, more of the little details that draw you in. The downside though is that much of the mystery and intrigue was spoiled by my having seen the movie first. And while I admit this kept me from enjoying the book as much as I’m sure I would have otherwise, it didn’t ruin it because regardless of surprise this is a good story. I really wish I’d read it first but hey, what can ya do?

The plot moves in time with a classic Charleston drawl, which is to say smoothly and slowly, however it works perfectly for this story. Although I’m used to reading books with a bit more action and blood, I really enjoyed how unexpectedly soothing, eerie, and captivating this book was. I think that Garcia and Stohl really managed to come up with something wonderfully original and refreshing in the YA paranormal genre and it’s easy to see why it was such a success.

Having a male protagonist (Ethan Wate) narrate the story was a really nice change for me actually. It seems that every YA book I see has a big bold tough female taking charge of the story so to read something from a guy’s perspective was weirdly really nice (I’m sure there’s some irony in there somewhere lol). Getting to know Lena and her world of powers and fate via Ethan’s eyes was really interesting because we had to pry open the mystery that she is little by little as Ethan determines to be her friend no matter what the small-minded townies think.

Lena is a girl with a complicated family, a pressure-filled life, and the weight of a curse on her shoulders, but to get to know her from an innocent outsider’s perspective, I think, made her story even more intriguing than say going the typical route by telling her story from her own POV and having some cute boy who happens to be nice enter the fringes of her life before getting sucked into her storm of destiny and love, etc. Lena was an awesome character that stood out on the page no matter whose perspective told the story.

As I’ve said, the YA market is a tad saturated in female POVs at the moment and this one really stands out because it isn’t. And it really works for this story. If told the other way around I honestly think it would have left a bit less of an impression on my mind. And I’m not saying guys should take the lead in all books, but I am saying that in this case I think it was a good creative move.

I really enjoyed the varied characters in this book. Amma and her voodoo, Macon and his rumored eccentricity, the high school sheep, the gossiping townies, Lena’s wild family…they all came together, wrapping themselves around the bones of Ethan and Lena, bridging them together until they’re interwoven into a single story barreling towards a curse and a Claiming.

The whole concept of Casters, the Claiming, being Light or Dark, it was all really well done and I’d almost describe it as a cool twist on witches. There are plenty of unnatural things going on in the tiny judgmental town of Gatlin and the way it’s combined with Southern American history was one of my favorite aspects to the story. It does move along a bit slow, and this book is maybe a bit too long, but overall I enjoyed it and would recommend it to anyone on the hunt for a chilling yet unexpectedly enchanting paranormal read.

Beautiful Creatures is just the beginning of a captivating paranormal series and yet it stirs up a fierce storm of fate, love, a curse, and the unexpected powers within ourselves. A dark tale spun with Southern charm, this is more than just a story about two teenagers falling in love.

Kami grew up outside of Washington DC, wore lots of black, and spent hours writing poetry in spiral notebooks. When Kami isn’t writing, she lives to bake, watch bad disaster movies, and listen to Soundgarden. She lives in Maryland with her husband, son, daughter, and their dogs Spike and Oz (named after characters from Buffy the Vampire Slayer).
-Goodreads

Writing has gotten me in and out of trouble since I was 15 (back then, mostly just in trouble.) I fell in love with American literature at Amherst and Yale, earned an MA in English from Stanford, and studied creative writing under the late great poet George MacBeth at the University of East Anglia, Norwich. I live in Santa Monica, CA, with my family, most of whom were enslaved into working with me in one form or another on my first YA book for Little, Brown. I’m not kidding; when my daughters wanted to go to school I said “Why are you so selfish? Get back in there and edit,” and by said I mean yelled and maybe threw things, it’s all a haze.
-Goodreads