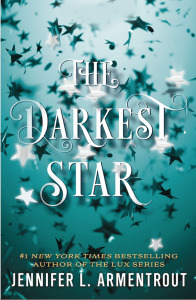 “When seventeen-year-old Evie Dasher is caught up in a raid at a notorious club known as one of the few places where humans and the surviving Luxen can mingle freely, she meets Luc, an unnaturally beautiful guy she initially assumes is a Luxen…but he is in fact something much more powerful. Her growing attraction for Luc will lead her deeper and deeper into a world she’d only heard about, a world where everything she thought she knew will be turned on its head…

Need a refresher of where the Lux series left off? Tor Teen has you covered!
“Where We Are Leading into The Darkest Star“

I have seen Armentrout’s name around for ages, it pops up on my social media feeds consistently now and then, so I knew of her Lux series but I just never quite got around to reading it. WELL, I was given an advanced copy of this companion series/spin-off series/continuation series and now I’m just going to have to go back and read that original series that comes before the big alien invasion because I want more.

I’m going to be upfront and say that this book is very CW, but I’m here for it haha. (I’m assuming you’re aware of the plot, character, and writing clichés for CW shows)

If you haven’t read Armentrout’s Lux series then don’t worry about it. You don’t need to to dive into this new series. If you have already read it then you won’t need quite all the background info provided in this book, plus you’ll have fun recognizing some familiar faces. But like I said, I hadn’t read the Lux books prior to this one and I had zero problem getting into it. In fact it just made me excited about this world with aliens so I’m definitely going to be adding the first Lux book to my Kindle.

All you need to know is that Lux begins prior to the big alien invasion of earth, and Origins begins four years afterwards.

I’ve mentioned before I think how I’m not a big alien fan. I apologize to any unique lifeforms out there but for whatever reason, outside of Doctor Who or Star Wars, I can’t seem to wrap my mind around aliens, they just make me laugh. (Maybe it’s just aliens in books actually…). But this book worked for me because these aliens have the ability to look like humans. (#loophole haha My mind can visualize that without laughing at the inadequate and silly image my poor imagination assembles from the written descriptions.)

In some ways this book made me think of that tv show Star-Crossed, which yes incidentally was produced by the CW Network haha. If you’ve seen that show and liked it, if you’re into humanoid aliens (in other words just picture humans with superpowers) that are generally really attractive, or you’re just a sucker for some aliens infiltrating humanity but don’t mind a dash of romance softening the edges, then you’ll probably enjoy this.

I love-hate the CW shows and this book was no exception 😂 I hated/rolled my eyes at some of the clichés and dumb character moments and the little bursts of silly drama but despite it all I just couldn’t stop reading and yes I will probably read the next book. I could write a whole list of suggested improvements and yet it’s all irrelevant because in the end it had this something that hooked me right from the beginning and likely will until the final book.

But because I’m me I can’t finish this review without listing a few complaints (no matter how moot the point because as I just said, I’m totally hooked haha).

Some of the “tough guy” dialogue was a bit cheesy at times. Not always, but there were definitely moments where I cringed a bit haha. And I felt confused by Evie because she’s continuously surprised by Luc’s powers. Like the Luxen have been on earth for a while so everyone pretty much knows at least the basics of what they can do by now, then Luc tells and displays some of his own special powers, and yet Evie constantly reacts in disbelief. Like come on girl, why you acting so surprised??

For example, when she gets hurt and he’s like Let me heal you, it’ll take like a minute, but she’s just flailing like No! I need a doctor! Bandages! Pain meds! I need a hospital! *face palm* EVIE. You’ve seen him heal wounds in seconds already!! What are you doing being dumb and inconvenient?? Also she gets so overwhelmed by emotions and at one point she completely disregards that a psycho is stalking her and just throws all good decisions out the window. And she does that a lot. Even her acknowledging that she makes bad decisions doesn’t dampen the stupidity for me. (Or maybe I’d just be the most boring main character EVER hahaha Yeah, I definitely would.)

Oh, and the “twist” about Evie and Luc was pretty obvious from literally that first night at the club. Not that I’d expect Evie to have guessed it really (because it’d honestly be bizarre for her mind to make that sci-fi leap unless in jest or if she was a total geek/sci-fi nerd haha), but as the reader…yeah, way obvious. The unfortunate thing with that was how outraged and shocked and deep in denial Evie reacts because it was just 100% annoying. She definitely overreacted. And made more dumb decisions. Ugh.

Finally, the cover fits the wrong genre to me. The cover says “YA Contemporary Fiction” not at all “YA Sci-Fi with Aliens!!” …just saying. I mean it’s really cute and I like it but I refuse to let it off the hook with that dumb “don’t judge a book by its cover” nonsense because that’s literally the job of a cover (yes, I know I’ve made this statement before and I will likely continue to do so haha). Its job is to advertise the book and entice a customer into buying it. I don’t generally buy or read YA Contemporary so if I hadn’t decided to take the time to read the description then I’d 100% never have picked this book up. That being said, I don’t like the covers for the preceding Lux series either (so typical of romance novels *rolls eyes*) but at least they make much more sense for the story… (Yes I’m very picky with cover art haha 🙈).

OKAY. My rant is over haha. Sorry but I couldn’t let those issues slide. The MC is sometimes funny and fierce, and sometimes she’s stupid and annoying. The writing, the plot, and the characters totally fit the CW Network formula, which is a good thing (because it sells) and a bad thing (because it’s both annoying and addictive). But I’m a fan of Luc. Absolutely. He’s fantastic and I stand by that haha.

SO despite those little irritants I’m still hooked by this book and will be indeed continuing on with the series unless, like many CW shows, it reaches a limit of drama or ridiculousness that I simply cannot handle haha (hence why I’ve never watched an entire show on the CW before. More than one season? Sometimes. A whole show? Never.)

Hot aliens, government secrets, a murderous psycho on the loose, and of course a little forbidden romance, all unfolds with an addictive intensity that will have you devouring the pages and craving more. The Darkest Star takes a stab at rekindling this world of Luxen assimilating on earth beside humans and does so with dramatic gusto that will make one want to swoon and rage at once. Brace yourself for a new binge-worthy read.

Begin with the LUX series!

# 1 New York Times and # 1 International Bestselling author Jennifer lives in Charles Town, West Virginia. All the rumors you’ve heard about her state aren’t true. When she’s not hard at work writing. she spends her time reading, watching really bad zombie movies, pretending to write, hanging out with her husband and her Jack Russell Loki. In early 2015, Jennifer was diagnosed with retinitis pigmentosa, a group of rare genetic disorders that involve a breakdown and death of cells in the retina, eventually resulting in loss of vision, among other complications.  Due to this diagnosis, educating people on the varying degrees of blindness has become of passion of hers, right alongside writing, which she plans to do as long as she can.

She is the owner of ApollyCon and The Origin Event, the successful annual events that features over hundred bestselling authors in Young Adult, New Adult, and Adult Fiction, panels, parties, and more. She is also the creator and sole financier of the annual Write Your Way To RT Book Convention, a contest that gives aspiring authors a chance to win a fully paid trip to RT Book Reviews.
-Author Website

7 thoughts on “The Darkest Star”