A Very Large Expanse of Sea by Tahereh Mafi (2018)

“It’s 2002, a year after 9/11. It’s an extremely turbulent time politically, but especially so for someone like Shirin, a sixteen-year-old Muslim girl who’s tired of being stereotyped.

Shirin is never surprised by how horrible people can be. She’s tired of the rude stares, the degrading comments—even the physical violence—she endures as a result of her race, her religion, and the hijab she wears every day. So she’s built up protective walls and refuses to let anyone close enough to hurt her. Instead, she drowns her frustrations in music and spends her afternoons break-dancing with her brother.

But then she meets Ocean James. He’s the first person in forever who really seems to want to get to know Shirin. It terrifies her—they seem to come from two irreconcilable worlds—and Shirin has had her guard up for so long that she’s not sure she’ll ever be able to let it down.”
–Goodreads

This book made me feel so many things and I loved it.

I’m a fan of author and fashionista Tahereh Mafi so this book has been on my radar for a long time, but there are a few things that held me back at first. Mostly it’s the fact that I get nervous when I read YA Contemporary because it’s often a toss-up between something fantastic and just a bunch of whiny dramatic teenagers in high school. Secondly I love love love the plot’s premise but I also a) hate to cry and b) hate when books get on an annoying preachy soapbox. So as much as I wanted to grab this book the day it came out I admit I was hesitant.

But obviously I did eventually because here we are!

I am thrilled to report that these high school teens are not the cliche whiny and overdramatic type. I wasn’t rolling my eyes every other page or struggling to connect with them. Furthermore while my eyes may have gotten a bit damp haha the truth, the politics, and the blunt situation of this book’s story were handled incredibly well. The collision of worlds, the love that blossoms like a flower in a sidewalk crack, the brutal honesty of being a muslim girl post-9/11, it was all heartbreakingly beautiful and I read the entire book in one afternoon. One afternoon!

It could have been so easy to twist this book into pure political agenda, but Mafi remains true to her characters and their story in a world where suspicion and fear are fresh in the hearts of America. She doesn’t sacrifice or abuse her characters simply to drive across a point, instead a story unfolds and organically a message surfaces from between every word. It doesn’t try to smash your face and scream at you to quit being so ignorant, rather you fall in love with each character and as their fates spiral into betrayal and chaos your heart will break, it will anger, it will have its eyes torn wide open forced to witness what so many already knew.

Another aspect that I deeply applaud is how the world isn’t simplified in this book. It’s complicated and messy and never quite predictable. Shirin has grown so used to the abuse, the whispers, the outright racism that she’s become hardened against everyone. She puts them all in the same box, she doesn’t bother getting to know them, she makes assumptions and has become prejudiced against them all. She is angry and hurting and so has closed herself off without realizing how she’s treating them the way they treat her: not giving anyone different a chance. Oh sure there are absolutely the horrible racist classmates and teachers surrounding her that she’s become so used to tuning out, but her lab partner, Ocean, will force her to take a step back and realize that perhaps some of them just want to get to know her not as a zoo-like oddity, but because she’s a genuinely interesting person. And that what one might assume based on appearances is not all a person is.

The romance between Shirin, a muslim girl who boldly wears her hijab even after 9/11 and storms the hallways angry and fierce, and Ocean, the golden boy and seemingly poster child for attractive white males everywhere, was so well played out. It wasn’t rushed, it wasn’t superficial, but rather it took its time and the conflict between such a forbidden/taboo relationship was deeply explored and challenged. I loved both of their characters and the way Ocean’s world-view widened because of Shirin and how Shirin’s armored heart softens because of Ocean’s genuine kindness. There are often cute teen romances that you know probably won’t last through college, but if there was ever a teenage love that could last a lifetime it’s Shirin and Ocean’s. I’m telling you, this book was so beautiful and so full of emotions that will have you swoon, scream, whimper, gasp, laugh, and clutch the book to your chest as your mind tries to absorb it all.

And the breakdancing!! I have a thing for breakdancing videos (thank goodness we have YouTube now so I don’t have to collect VHS tapes haha – the technology throwback in this book had me smiling) and I loved that it’s something honestly unexpected in this book (there are several autobiographical elements to the story, such as breakdancing, which I think is really raw and cool to share with readers). I absolutely loved the relationship between Shirin and her brother Navid, and the breakdancing crew Navid starts was such a fresh take and fabulous addition to the story. It forms another layer to the characters, the story, and it works so well.

There simply isn’t enough time or space to discuss all of the things I love about this book. The relationships, the characters, the plot, the subplots, the complexity, the double-standards, how within the nightmare and chaos and outrage and fear that in the end it comes down to just a girl and a boy who’ve fallen in love, something so innocent and simple and yet the repercussions will have your heart twisting in pain. Even if YA Contemporary isn’t your main thing (like me) I still urge you to look into this book because it was truly a standout.

I. Loved. This. Book! To describe this book in two words: absolutely beautiful.

A Very Large Expanse of Sea is a beautifully shared tale of a boy and a girl who fall in love and the hate-coated chaos that ensues. This story will twist your heart in so many ways, an absolute rollercoaster of emotions from start to finish, you’ll have tears running down your cheeks one moment and laughter bursting from your lips the next. Incredibly complex, masterfully handled, and a story that will stay in my heart for ages to come. 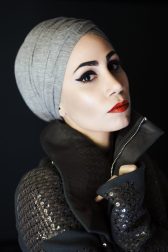 Tahereh Mafi is the New York Times and USA Today bestselling author of the Shatter Meseries. She was born in a small city somewhere in Connecticut and currently resides in Santa Monica, California with her husband, fellow author Ransom Riggs. She can usually be found over-caffeinated and stuck in a book.