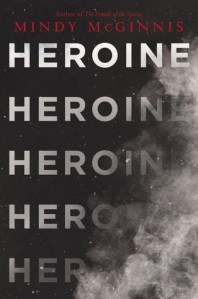 “When a car crash sidelines Mickey just before softball season, she has to find a way to hold on to her spot as the catcher for a team expected to make a historic tournament run. Behind the plate is the only place she’s ever felt comfortable, and the painkillers she’s been prescribed can help her get there.

The pills do more than take away pain; they make her feel good.

With a new circle of friends—fellow injured athletes, others with just time to kill—Mickey finds peaceful acceptance, and people with whom words come easily, even if it is just the pills loosening her tongue.

But as the pressure to be Mickey Catalan heightens, her need increases, and it becomes less about pain and more about want, something that could send her spiraling out of control.”
–Goodreads

This story was one helluva rough ride but once again Mindy McGinnis delivers a hard look at a tough subject and does it well.

When I wake up, all my friends are dead.

(That was not a spoiler. It’s literally the very first line in the book. Eek.)

Reading this book was honestly like watching a slow-motion car crash. You can’t draw your eyes away despite the ending you know will come. In fact you don’t even have to assume because the book opens with the crack just before the climax and it leaves you wide-eyed and fully aware of the tragic downfall about to unfold. And you think that that moment is the lowest this book will reach and yet it isn’t because we spend so much time in Mickey’s head that reaching the climax that shoots her down fast and nasty is an emotional turning point that is even worse and more difficult to bare.

McGinnis does her research and it you can tell. It’s painfully obvious that she isn’t just some writer slinging together assumptions gleaned from TV shows and trying to make a few bucks with sensationalism riding the tide. The book includes this warning upfront “This book contains realistic depictions of opioid use. Recovered and recovering addicts should proceed with caution.” and you’d be wise to heed it. Even as a non-user reading the raw yet simply honest transgression of events and thoughts of main character Mickey Catalan it was rough and you can feel it vividly. And because of this it could be enough to either frighten you away from ever being near the stuff or it could entice you try it maybe just once but you’ll be smarter, more careful. Regardless of that very real risk I think this was a book that needed to be written and I’m glad that it was McGinnis who wrote it because she will neither sensationalize nor sugar-coat the journey. She doesn’t outright villainize or judge any party involved and she won’t make up answers we want to hear when the truth is they don’t exist.

“Why?”
“What do you mean, why?” There’s an edge in my tone, defensiveness I didn’t mean to put there.
“I hurt too, you know,” Carolina says, her voice lifting in response. “My arm was busted all to hell, and I went through therapy and took Oxy just like you did…Why you and not me?”
…
What it boils down to is simple, terrifying.
“I don’t know,” I tell Carolina.

Obviously addiction is the core of the story but the book doesn’t forget that it’s a book and this actually added to the realism and the emotion punching the raw message through. Mickey Catalan is a fully formed character and is one that doesn’t lend itself to clichés or stereotypes as an out. She has good parents even if they’re divorced and still navigating that change, she has amazing friends that go way back to childhood, she has loyal teammates, she has a tough but caring coach, she isn’t desperate for scholarships or money or love or talent or whatever. She has a good life filled with promise. She might not be the star on the team but she’s still one of the best. Mickey Catalan is a normal teenage girl with normal teenage girl problems until suddenly she isn’t.

Carolina shakes her head. “She’s not Mickey Catalan.” I hand her the ball, our fingers touching for a brief second. “But you’re not really Mickey Catalan anymore either, are you?”

I love how we simultaneously watch Mickey as she slips down this enticing slope and see the world continue spinning around her. She still has to go to school and do her homework, she still has to hit the gym and go to softball practice, she still has to attend family dinners and doctor appointments, and she still has to be better than best at each softball game. And that’s just it. There are an infinite amount of paths that could lead someone to the same ending as Mickey or Josie or Luther or Derrick or Edith, and while people like to prefer imagining that the people who succumb to drugs are a bunch of do-nothings it’s alarming to realize it could also happen to someone who wants to do something. Mickey is on a team and she’s a tough competitor and she’s willing to push through pain for the sake of winning. She didn’t want to throw her life away in defeat, she wanted to do anything to help her win. Denial and rationalization are her strongest weapons but she doesn’t notice when they’ve turned against her.

I smile and say the right things, but the truth is that my gut just bottomed out…Ferriman just took away any pretense I had, any excuse I could make to myself about what I’m doing and why.

This book isn’t just doom and gloom though. It’s a realistic tragedy, an increasingly common one currently sweeping the U.S. like an epidemic. The book doesn’t end with a perky musical number and roses but it does end in hope. And that is key. It bluntly confesses the truth no one wants to hear that even with therapy and rehab and time that the want will never really go away. Like the mob you can step aside but never bow out. But this book doesn’t leave it at that. It leaves us with a tendril of hope for Mickey and it’s enough to cling to. It’s just enough. At the back of the book the author also includes a personal note on the subject as well as credible resources regarding addiction.

Heroine is a gritty glimpse into the slide from athlete to addict made perhaps even more frightening by its simple honesty. Sensationalism and scare tactics are left out and instead it faces its readers down with raw emotion and a vividness that will leave your mouth dry. Despite its opening line revealing what is to come the story is a gentle glide that will draw attachment to the characters, to the success of the team, to the risk of the high, and by its end the only thing one can do is cry and grasp onto the last defiant tendril of hope. Dedicatingly researched, expertly written, and choosing to profess blunt truth over an overt cautionary tale, this book is one that will remain with its readers for years to come and will hopefully open their eyes to the opioid epidemic currently sweeping the nation.

Similar Recommended Reads: The Female of the Species by Mindy McGinnis, Rainbows and Raindrops by Kelley Lynn & Jenny S. Morris, The Poppy War by R.F. Kuang

Mindy McGinnis is a YA author who has worked in a high school library for thirteen years and is an Edgar Award-winning novelist who writes across multiple genres, including post-apocalyptic, historical, thriller, contemporary, mystery, and fantasy. While her settings may change, you can always count on Mindy’s books to deliver grit, truth, and an unflinching look at humanity and the world around us.
-Goodreads & Author Website