I’m excited to share with you the blog tour for STORMRISE by debut author Jillian Boehme! This new YA Fantasy has included tags such as Twelfth Night and dragons so of course I was sold and cannot wait to read it haha. Keep reading this post to find out more about the book and the author! (Click the banner to follow the tour!) 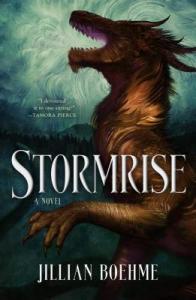 A combat warrior will risk everything to awaken the dragons and save her kingdom in Jillian Boehme’s epic YA Fantasy debut, Stormrise, inspired by Twelfth Night and perfect for fans of Tamora Pierce.

If Rain weren’t a girl, she would be respected as a Neshu combat master. Instead, her gender dooms her to a colorless future. When an army of nomads invades her kingdom, and a draft forces every household to send one man to fight, Rain takes her chance to seize the life she wants.

Knowing she’ll be killed if she’s discovered, Rain purchases powder made from dragon magic that enables her to disguise herself as a boy. Then she hurries to the war camps, where she excels in her training—and wrestles with the voice that has taken shape inside her head. The voice of a dragon she never truly believed existed.

As war looms and Rain is enlisted into an elite, secret unit tasked with rescuing the High King, she begins to realize this dragon tincture may hold the key to her kingdom’s victory. For the dragons that once guarded her land have slumbered for centuries . . . and someone must awaken them to fight once more.

Stormrise is a YA military fantasy infused with dragon lore and it was captivating from start to finish. War, battle training, a band of young men (except one lol) marching to evacuate the king, a dragon prophecy set into motion, and a young heroine who sets forth on a dangerous path impersonating a solider to save her family and her kingdom. Lots of action, plenty of lore, many intriguing characters, tons of challenges to be overcome, and every moment Rain is desperately guarding her secret. A story reminiscent of Mulan and infused with dragons breath, this is a fantasy tale you won’t want to miss out on!
-pooled ink Reviews

JILLIAN BOEHME is known to the online writing community as Authoress, hostess of Miss Snark’s First Victim, a blog for aspiring authors. In real life, she holds a degree in Music Education, sings with the Nashville Symphony Chorus, and homeschools her remaining youngster-at-home. She’s still crazy in love with her husband of more than thirty years and is happy to be surrounded by family and friends amid the rolling knolls of Middle Tennessee.