Today I’m happy to help boost the news about CRIER’S WAR, a new YA Fantasy by Nina Varela! When what should have been mere playthings rise up and wrest the kingdom from human hands, one can rest assured that humanity will not lie broken for long… Keep reading for more on the book and the author plus a fun guest post!
(Click on the tour banner to see the tour schedule for more fun posts on this book!) 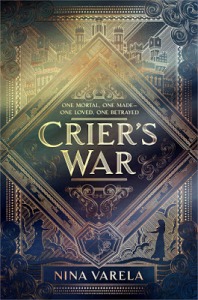 After the War of Kinds ravaged the kingdom of Rabu, the Automae, designed to be the playthings of royals, usurped their owners’ estates and bent the human race to their will.

Now Ayla, a human servant rising in the ranks at the House of the Sovereign, dreams of avenging her family’s death…by killing the sovereign’s daughter, Lady Crier.

Crier was Made to be beautiful, flawless, and to carry on her father’s legacy. But that was before her betrothal to the enigmatic Scyre Kinok, before she discovered her father isn’t the benevolent king she once admired, and most importantly, before she met Ayla.

Now, with growing human unrest across the land, pressures from a foreign queen, and an evil new leader on the rise, Crier and Ayla find there may be only one path to love: war.

Post Prompt: “Book Playlist”
Choose a song for each main character or as many characters as you want as well as one for the overall story. (Bonus/Optional: Provide brief notes for why you chose those songs. Feel free to include a few particular lyrics if you want!)

When she was newbuilt and still fragile, and her fresh-woven skin was soft and shiny from creation, Crier’s father told her, “Always check their eyes. That’s how you can tell if a creature is human. It’s in the eyes.”

Crier thought her father, Sovereign Hesod, was speaking in metaphor, that hemeant humans possessed a special sort of power. Love, a glowing lantern in their hearts; hunger, a liquid heat in their bellies; souls, dark wells in their eyes.

Of course, she’d learned later that it was not a metaphor.

When light hit an Automa’s eyes head-on, the irises flashed gold. A split second of reflection, refraction, like a cat’s eyes at night. A flicker of gold, and you knew those eyes did not belong to a human.

The woods seemed to bend around her, trees converging overhead, while near her feet there was a rabbit’s den, a warm little burrow hidden underground from wolves and foxes . . . but not from her.

She stood impossibly still, listening to four tiny pulses radiating up through the dirt, beating so rapidly that they sounded like a hive of buzzing honeybees. Crier cocked her head, fascinated with the muffled hum of living organs. If she concentrated, she could hear the air moving through four sets of thumb-sized lungs. Like all Automae, she was Designed to pick up even the faintest, most faraway sounds.

This deep into the woods, dawn had barely touched the forest floor—the perfect time for a hunt. Not that Crier enjoyed hunting.

The Hunt was an old human ritual, so old that most humans did not use it anymore. But Hesod was a Traditionalist and historian at heart, and he fostered a unique appreciation for human traditions and mythology. When Crier was Made, he had anointed her forehead with wine and honey for good fortune. When she came of age at thirteen, he had gifted her a silver dress embroidered with the phases of the moon. When he decided that she would marry Kinok, a Scyre from the Western Mountains, he did not make arrangements for Crier to take partin the Automa tradition of traveling to a Maker’s workshop, designing and creating a symbolic gift for her future husband. He had planned for a Hunt.

So Crier was not actually alone in these woods. Somewhere out there, hidden by the cover of shadows and trees, her fiancé, Kinok, was hunting as well.

Message from the Author: A friend of mine needs help raising money to stay out of homelessness, and I’m going to do a giveaway where you enter by donating $5 to her gofundme. To enter visit https://twitter.com/ninavarelas/status/1179604419039481856

Nina Varela is a nationally awarded writer of screenplays and short fiction. She was born in New Orleans and raised on a hippie commune in Durham, North Carolina, where she spent most of her childhood playing in the Eno River, building faerie houses from moss and bark, and running barefoot through the woods. These days, Nina lives in Los Angeles with her writing partner and their tiny, ill-behaved dog. She tends to write stories about hard-won love and young people toppling the monarchy/patriarchy/whatever-archy. On a related note, she’s queer. On a less related note, she has strong feelings about hushpuppies and loves a good jambalaya. CRIER’S WAR is her first novel. 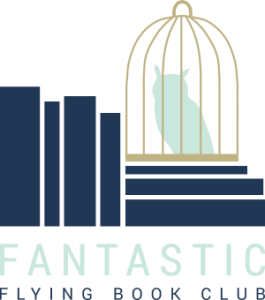