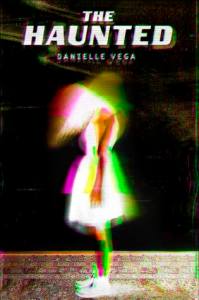 “From Danielle Vega, YA’s answer to Stephen King, comes a new paranormal novel about dark family secrets, deep-seated vengeance, and the horrifying truth that evil often lurks in the unlikeliest of places.

Hendricks Becker-O’Malley is new in town, and she’s bringing baggage with her. With a dark and wild past, Hendricks doesn’t think the small town her parents moved her to has much to offer her in terms of excitement. She plans on laying low, but when she’s suddenly welcomed into the popular crowd at school, things don’t go as expected.

Hendricks learns from her new friends that the fixer-upper her parents are so excited about is notorious in town. Local legend says it’s haunted. Hendricks doesn’t believe it. Until she’s forced to. Blood-curdling screams erupt from the basement, her little brother wakes up covered in scratches, and something, or someone pushes her dad down the stairs. With help from the mysterious boy next door, Hendricks makes it her mission to take down the ghosts . . . if they don’t take her first.”
–Goodreads

So I’m going to be honest, I didn’t finish this book. But it is October which is the month of Halloween so of course I couldn’t resist telling you about this one! And yes, even though I didn’t technically finish it I would certainly recommend it.

What? Why would I recommend something I didn’t even bother finishing??

I read almost half of the book before I quit. But I didn’t quit because I hated it or because it was dull or any of the usual negative reasons. I quit because this book did exactly what it set out to do, creep me the hell out. I have never been nor will ever be a fan of the spooky, scary, or horror stories so I figured this one wouldn’t be my cup of tea. I’m always game to try things however and as this was the month’s pick for book club I decided to give it a chance. It just wasn’t for me. Pure and simple, I don’t enjoy being creeped out haha (although it was a lot of fun discussing it at book club!).

BUT if you do love a good story that will raise the hairs on the back of your neck then read this one!!! Vega is already known as an author with a talent for the chilling and she does not disappoint with this either. Total classic scary movie with enough twists to be original. Haunted house, ghosts, murders, creepy dolls, hallucinations, mysterious pasts, secrets new and old, all of these things are dumped on top of what poor Hendricks thought was simply a move to a new town, a new school.

So yeah, there were a lot of clichés sprinkled throughout (most of which were pointed out in the book as the book tries to be self-aware and use its clichés to its advantage) and if you regularly watch scary movies or read spooky books then you might be in quite familiar territory with this one, and yet it’s still entertaining. (Or if you’re incredibly weak like me then despite all the clichés you’ll still be shaking your head profusely yelping “NO THANK YOU” because Vega has a definite talent for weaving together atmosphere).

I was screaming at characters to do something or not do something, I was fiercely announcing “NOPE. NOPE. NOPE.” as truly creepy things happened (Come on, old broken talking dolls that move when you’re not looking?? NOPE. NOT TODAY, SATAN.). I just had too many other books on my TBR that I wanted to read to push myself through this one but I can 100% see how much fun a horror fan would have, especially teens dipping their toe into the genre. Well written, utterly intriguing, creepy as hell, and filled with all the ingredients to make one scream, laugh, and shudder (and occasionally roll their eyes).

If you are on the hunt for a fantastic Halloween read then pick up this book! It isn’t super long and it’s just the ticket. Happy reading!

Danielle is the author of THE MERCILESS series, and SURVIVE THE NIGHT (as Danielle Vega) as well as BURNING, BREAKING, and the forthcoming STOLEN TIME trilogy (as Danielle Rollins.) She lives in Brooklyn with her husband and a cat named Goose.
-Vega’s website