I am very excited to share with you all today the official cover for Talis Jones’ final book in the Otherworld trilogy! It’s set up as both a prequel and a finale for the twisty fantasy series as it focuses on Crown Cassandra. You all know I love antagonist/villain stories so I’m very curious to read this one! Keep reading this post to find out more about the book, the author, and my mini reviews for the first two books! 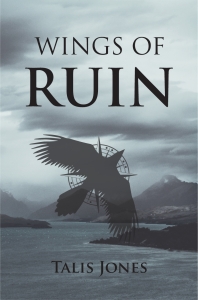 Add to your Goodreads!

Greeted by the dead of night and raised on the fringe of greatness…she was always destined for something more. But she was a heroine who walked in shadow and this is not a fairy tale.

At last the story of the infamous Crown, Cassandra Böcklin, is unveiled. Pawn of a prophecy and doomed to a fate of her own making, a girl who once dreamed of belonging grows twisted into a tormented soul with a talent for draining the life of her enemies to sate her ambition. Hungry and betrayed, witness her rise to power as she tears through worlds, builds herself a throne, and seizes the Island of Dreams for her own reign. The Crown shall rise and the dead will bow. There’s only one thing she overlooked…

The epic story that both precedes and concludes the Otherworld Trilogy.

Book One: Amazon | Goodreads
Crooked Raven launches a breathtaking tale of two siblings who will fight through Hell to save one another. Flowing with beautiful prose and a plot that both burns and delights, this is a must read for fantasy lovers.
-pooled ink

Book Two: Amazon | Goodreads
Carrion Crow scales new heights beneath the staggering storm of prophecy that could cleave apart the Island’s future either resurrecting it or damning it forever. The line between hero and villain blurs in a dizzying dance as the Verdandi siblings face down a Crown not yet through haunting the dead. Winner takes all, but when the blood is washed away will there be anyone left standing to claim it?
-pooled ink