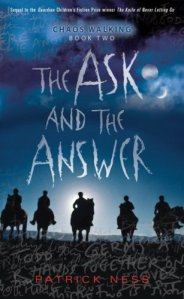 “We were in the square, in the square where I’d run, holding her, carrying her, telling her to stay alive, stay alive till we got safe, till we got to Haven so I could save her – But there weren’t no safety, no safety at all, there was just him and his men…

Fleeing before a relentless army, Todd has carried a desperately wounded Viola right into the hands of their worst enemy, Mayor Prentiss. Immediately separated from Viola and imprisoned, Todd is forced to learn the ways of the Mayor’s new order. But what secrets are hiding just outside of town? And where is Viola? Is she even still alive? And who are the mysterious Answer? And then, one day, the bombs begin to explode…

“The Ask and the Answer” is a tense, shocking and deeply moving novel of resistance under the most extreme pressure. This is the second title in the “Chaos Walking” trilogy.”
–Goodreads

Book One: THE KNIFE OF NEVER LETTING GO

This book BLEW MY MIND.

I think it may even be better than the first book.

I’m still in that aftershock phase, you know when you read a book so epic and with an ending so unexpected you just have to take a minute and sit and process and meditate and process and breathe and process and WOAH because it just totally blew your mind and you’re trying to put the pieces back together and wrap your mind around the awesomeness and cleverness and total unexpectedness of it all??? Yeah, that feeling.

Some stuff is predictable but it’s supposed to be. You read some sections and you’re like “oh yeah, I know what’s gonna happen” and yeah you actually do but only because Patrick Ness is about to TOTALLY BLINDSIDE YOU. I mean HELLO! So many fake right shoot lefts in this book. SO. MANY.

And as a side note: in this book Mayor Prentiss’ character plays a far larger role and as it reveals and unravels itself you are torn between utter disgust and pure admiration. Sort of like how Mr. Ollivander described Lord Voldemort as “terrible but great.”

Please read this series. Your life is literally incomplete until you do. You know that little hole in your soul? That little empty spot in your life? You know what that is? What’s missing? It’s Jesus BUT ALSO THE CHAOS WALKING SEIRES!!!

P.S. Thank you Dillon for introducing me to this series that night when we were both avoiding doing manual labor during strike. # theatrelife

Purchase here: The Ask and The Answer