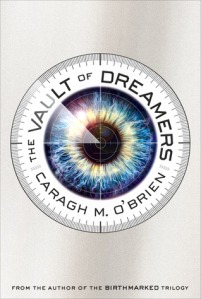 “From the author of the Birthmarked trilogy comes a fast-paced, psychologically thrilling novel about what happens when your dreams are not your own.

The Forge School is the most prestigious arts school in the country. The secret to its success:  every moment of the students’ lives is televised as part of the insanely popular Forge Show, and the students’ schedule includes twelve hours of induced sleep meant to enhance creativity. But when first year student Rosie Sinclair skips her sleeping pill, she discovers there is something off about Forge. In fact, she suspects that there are sinister things going on deep below the reaches of the cameras in the school. What’s worse is, she starts to notice that the edges of her consciousness do not feel quite right. And soon, she unearths the ghastly secret that the Forge School is hiding—and what it truly means to dream there.”
–Goodreads

The cover is super awesome.

Really interesting concepts and overall plot idea. I’m a theatre & film student so it was cool to read a dystopian-ish book reaching out to that world. Dreams have always been a fascination for me so that was interesting to read about as well.

The ending? I think I’m okay with it…maybe…hmm…
Ending with Linus? Well, I wish I could know what happened but I’m also a sucker for saved-the-world happy endings so it would have been lovely for Rosie and Linus to save each other and expose Dean Berg and etc. but alas none of that happened. Perhaps in the next book…

But oh man, this plot! I can understand what Dean Berg is after but I cannot condone his methods.

Overall a really interesting read and good story, very entertaining but definitely some plot holes and givens that require your imagination and some serious overlooking/don’t-think-too-hard-into-it-or-the-plot-falls-apart is necessary plus the ending is dead depressing cliff-hanger…no almost pun intended 😉 Although I admit that as depressing as it might be it does seem far more realistic than some scrawny 15 year old film student taking down an innocent looking evil genius and his minions and not to mention his multi-billion dollar top of the line but super under the radar lair of experiments.

So go ahead and read it because it gives one some interesting ideas and concepts to think about and it’s an entertaining journey to read but it’s not quite 4 stars in my opinion. Close but no cigar (:

Purchase here: The Vault of Dreamers

Caragh M. O’Brien is the author of the BIRTHMARKED trilogy and THE VAULT OF DREAMERS series, both from Macmillan/Roaring Brook Press. Born in St. Paul, Minnesota, Ms. O’Brien was educated at Williams College and earned her MA from Johns Hopkins University. She recently resigned from teaching high school English in order to write young adult novels.
-Goodreads