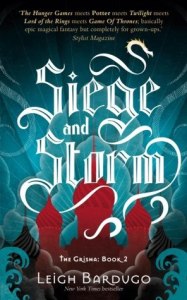 Hunted across the True Sea, haunted by the lives she took on the Fold, Alina must try to make a life with Mal in an unfamiliar land. She finds starting new is not easy while keeping her identity as the Sun Summoner a secret. She can’t outrun her past or her destiny for long.

The Darkling has emerged from the Shadow Fold with a terrifying new power and a dangerous plan that will test the very boundaries of the natural world. With the help of a notorious privateer, Alina returns to the country she abandoned, determined to fight the forces gathering against Ravka. But as her power grows, Alina slips deeper into the Darkling’s game of forbidden magic, and farther away from Mal. Somehow, she will have to choose between her country, her power, and the love she always thought would guide her–or risk losing everything to the oncoming storm.”
–Goodreads

Book One: SHADOW AND BONE

Prince Nikolai finally shifts from distant ghost into a force of flesh and bone. He is one of the ultimate highlights of this particular book. Really he’d be far more accurately compared to a chameleon than a dog. His uncanny ability to play the part no matter the stage is fascinating to witness. And really, for despising the court and politics so much he continually proves himself as a master politician himself. He’s clever, witty, humorous, determined, sly, quick, and always legions ahead of everyone else and their little plans and ideas. Despite his perhaps unsettling gift to woo and change faces he is good at the core and if I lived in Ravka I’d fight for him to be king in a heartbeat.

Other happenings in this book include Alina finding a sparkly bracelet (adding to her badass jewelry collection), a new hair-do, and of course more love drama which, in fairness, she really doesn’t appreciate. At all.

This book also continues to establish the men in her life::

Mal: a man who is common (except his handsomeness obviously), sponsored by a bottle of kvas, a talented hunter, and who despite possessing his lady-love’s heart and loyalty since childhood and yet every moment she’s with another male he gets all jealous, pouty, and squirmy.

Darkling: a man who is dark, mysterious, powerful, clever, sexy (and he knows it) and he is also lonely but mostly he’s just a power-addict and in need of a lady-love and remember, like calls to like. Oh but beware, he exhibits Edward Cullen-like symptoms in this book.

Nikolai: a man who doesn’t drink the kool-aid but makes it himself thus creating not only the hottest party of the year full of funny jokes, beautiful guests, and great food, but also order, followers, and clever manipulation of those too blasé to even deserve more than a supporting character role.

So our love triangle becomes a love…square? Basically Alina just keeps catching flies with the golden honey of her power and charming personality of kicks, punches, sarcasm, and pouts. But despite all of that she harnesses light, grows in strength and power, proves the phrase “beauty sleep” as more fact than myth, and can even be quite pleasant when people aren’t being utterly ridiculous (which, of course, they often are because ugh men ugh war ugh freaking Ravka).

Honestly it was a relatively quick read when I wasn’t busy and I’d say the best part of this book was the beginning with Sturmhond (this guy is great and the beginning doesn’t hesitate to pick up where it left off in book 1). But then everything else was…I’m not sure, it was far from empty filler but it wasn’t as spiced and flavorful as the first book either. Rather it acted almost like a simple usual bridge shuffling the reader from the discoveries, surprises, and adventure of book 1 to the (hopefully) epic battles and conclusion in book 3.

Okay that makes it sound worse than it was. This book was still good, okay? It just somehow lacked a bit of that punch and magic that I felt enveloped in with Shadow and Bone. Besides, most book series suffer from this upside-down bell curve of “middle book syndrome.” You start out with an interesting, creative idea with all its power of newness and you can’t help but already envision this epic ending and clever conclusion but it’s all too long for a 2-book series and too short for a 3-book series…but making things a trilogy sounds cooler, has that relation to Aristotle’s Causal Plot Structure that we humans tend to love, and I suppose it also means selling more books. We have a beloved weakness and fondness for things that come in threes.

Anyhoo, Siege and Storm was entertaining and flew me along to the end where I admit I’m anxiously waiting to read the (hopefully) epic and non-ridiculous trilogy conclusion. Stay tuned…

One thought on “Siege and Storm”