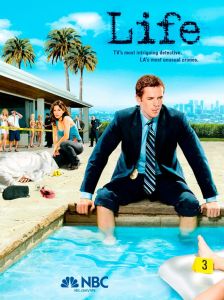 The NBC television show Life is pretty good! I’ve only just finished the first season but I look forward to finishing the whole show (after which I’ll hopefully remember to come back and add to this post).

IMDB gives a very brief description: “A former police officer [Charlie Crews] returns to the force after having been wrongly imprisoned for years.” Albeit brief ’tis accurate.

Detectives Crews and Reese work well together despite their conflicting personalities. I found Crews’ post-prison zen personality amusing but not ridiculous. He likes to talk in riddles, answer questions with questions, and yet it’s nothing far-fetched but are actually questions commonly posed, debated, pondered, and still unanswered (…but usually only by philosophy professors, students, bored or annoying people, or people um “enlightening” their selves via illicit drugs).

Of course while this is amusing to a viewer it’s downright irritating to the black & white straightforward cops, particularly his new partner Detective Reese. Reese’s personality is more cold but understandably so as it’s tough as a policewoman in general (the sexism in the field is incredibly ridiculous # HeforShe) then add her tough father, the incident while working undercover, and now being paired with the most annoying man around whom she is still on the fence about (like most other people) his sentence. Thankfully the show (and actress) doesn’t put a vice-grip on this but lets it naturally ebb and flow. She gets used to Crews and develops a basic (but growing) loyalty to him as her partner but remains true to herself and who she is.

Reese has an interesting background incident with drugs while undercover that is alluded to or mentioned once in a while and on one hand I wish the show would tells us more but at the same time I’m glad it doesn’t because that’s not the focus of this show. I appreciate that. Sure it could add some drama to the show but it doesn’t need it. No need to go down that rabbit hole. Instead the show stays focused on Crews. Sure he’s living day to day as a detective with the LAPD but his mind and world is truly revolving around his wrongful imprisonment and so with Crews as the main character it is his life that takes precedent in the story as pitched in the show description and core plot. It stays true throughout this whole season. Well done. [See Fact #3]

I felt that the show balanced the current cases with the private investigation into the truth behind Crews’ imprisonment quite well. I found both aspects intriguing episode to episode. This show came up with many unique and interesting crime plots/cases keeping each episode fresh and moving forward.

I also liked how the season tied the ribbon around the box but hasn’t tied the bow quite yet. This leaves the audience semi-satisfied rather than in uproar but also interested and curious enough to come back for another season. Well, I dunno…somehow I feel that there could have been some sort of bigger intrigue build up to take us into the next season but regardless I’m going to watch it because I genuinely liked the show.

All too often a crime is summed up simply. And yeah, sometimes it is simple. But sometimes, like the slaughter of an entire family, the 12 year wrongful imprisonment of a cop, etc. is anything but simple and this show seems to be aware of that and the shockwaves such an event can reach. Each episode Crews makes it ripple over ripple reaching towards the point of impact, the heart and reason of it all. Season One ends with the ‘who’ and now we await Season Two to find out the ‘why.’

Overall a good cop show. I like it. Looking forward to the next/final season. Don’t let me down Crews!

UPDATE: (08/22/15) I finished watching Season 2/the final season of Life last night and I have to say I really liked it. I’m always nervous with shows because sometimes you find a show and it’s great and you really like it and then it’s renewed for another season and it’s nothing but a giant disappointment. Fortunately this was not the case for Life. I haven’t looked into why the show ended and I honestly don’t care because weirdly enough two seasons in length was perfect for the story it told. They didn’t drag everything out too long milking it past purity of plot and they didn’t rush it too much either. Sure there are a bucket of loose ends left for the audience to ponder and never know (mainly on where characters went, what will characters do next, how the lives of characters will play out, etc. but that’s life isn’t it? You never do get all the answers) but it’s not so much that this show doesn’t come to a close and satisfy.

Like I guessed, they added some more romance and more Reese screen time in this season but it wasn’t too much, it wasn’t dramatic and ridiculous and messy and blah blah blah. It was enough to give this season a different feel from the first and keep the show fresh but it wasn’t over-done and the show still remained true to plot. I really appreciate this. Oh my word if nothing else I am stunned at how grounded this show stayed with itself.

The very end? The ending ending? It was great. Perfect. Simple and perfect. Nothing ridiculous, nothing messy, nothing puffed up on entertainment-purpose-only steroids, and the best part? Not a lot of talk talk talk. Crews was zen (or on the path anyway) and honestly? If you’re going to make him kill someone even though he’s (mostly) zen then this was the way to do it. Simple. Swift. Clean. He still hadn’t left prison and he needed his freedom so when the target sat next to him he struck. The target died and Crews is at last free to embrace peace. No big talk up, no dramatic monologues, no pointless blood and brutality, no build up of hate and rage nor shouting or bloodlust. An understanding, a punch, a resolve hardened by the passing fruit trees, and warm yellow sunshine, and all things calling him to peace, all things kept from him while he still remained imprisoned, so then a strike, a death, and then peace.

The show ends with Charlie Crews set free and his partner Dani Reese there to witness the release of his haunted soul.

Ultimately? This show is about life. So yeah, nailed it with the title choice.

I conclude this television show review with my recommendation. If you’re into all that gratuitous gore and action and sex and whatever then maybe not. But if you’re interested in cop shows, interesting crimes, mysteries, people, psychology, or just good television for late nights or quiet days. Then yeah, I’d for sure recommend NBC’s Life to you.