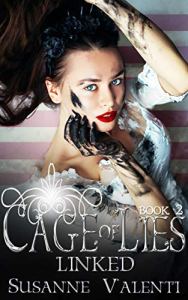 “In a world she never knew existed, Maya is coming to terms with how much her life has changed. Danger lurks around every corner, nothing is as she expects and she’s never felt so alive. But the choices she makes could change everything and jeopardise the things she cherishes most. There is so much to learn and so much to love but her heart is pulling her back. The Guardians are hiding in the shadow cast by their Wall, concealing the truth from the people inside. It’s a shadow that darkens her happiness and she can’t stop fighting until the truth comes to light. It would be easier to walk away but Maya has never run from anything and she’s not about to start now.”
–Goodreads

This second installment in the Cage of Lies series picks up a couple months after Chained and opens with a bang of energy. It supplies small updates on life since their survival in the previous book and launches right into training, planning, and moving out on a new mission seared with inevitable challenges.

New characters are introduced, familiar characters are further developed, and relationships grow and evolve. Valenti leaves no time to waste nor dull moments to arise between conflicting personalities, high stakes, and the fierceness with which the group are storming their world.

Valenti also seems to have quite the talent for constructing and throwing up totally unexpected obstacles. You never see them coming but they’re also totally logical. She’s not just tossing in random tricky situations only for the sake of action or in a half-baked plan to somehow make the story longer and better. No Valenti is strategic and with each move she catches you a bit off-guard swinging you along for the thrilling ride while also revealing more depths, layers, and details about this world that Maya has stumbled into since leaving The Wall.

A recurring favorite writing tactic that I commented on with Valenti’s first book Chained resurfaces in its sequel: the occasional shift in POV. Once again the group is split up and Valenti isn’t letting her story be tied down and limited to the narrow scope of where protagonist Maya is located. Instead she allows the occasional chapter to flip to another group member’s perspective to let the reader keep tabs on what’s happening everywhere. It’s well executed and I really love how it broadens the story.

You know, this might be a small detail but I really feel like mentioning it. I really love how Valenti somehow is able to craft her characters with a beautiful balance of hard and soft. They’re not all tough action heroes all the time and they’re not soft-hearted doe-eyed lovers all the time either. Better than that she doesn’t force her characters into one category or the other. No instead they’re all a wonderful blend of tender-hearted romance and iron-strength fierceness. They can be deadly killers in a fight but on a relaxing sunny day they might just splash in the water, or braid each other’s hair, or tell funny stories, or sneak away a special surprise gift to show their love. They’re human and weirdly enough that’s not the most common feature of characters particularly in books pursuing lots of action and/or romance. Too often they’re peg-holed and while we may still enjoy it it nevertheless adds a slight level of unrealism. I dunno, I can only express my own personal opinion obviously but I have really enjoyed Valenti’s character work.

The ending though. No. No. NO. I was for sure internally screaming for those last pages. I 100% did not see that coming! AT. ALL. I mean obviously nothing is ever easy as pie but really??? Nope. Totally caught off guard. Oh my word I truly need the next book to know what happens!

Overall, I think Linked may be even better than Chained. I’m an absolute fan and it’s too late to change my mind about it so instead how about you grab a copy of Chained and dive in for yourself.