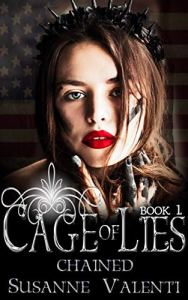 “Terrified of the contamination and the creatures it has created, humanity hides behind The Wall. No one knows what lies beyond the wasteland. Maya has never thought much about what might still be out there, lurking in the forgotten places. But when she’s thrust into the unknown, she is forced to question everything she has ever been told. Not everyone outside died, some of them became something… else. As her heart is torn in two, every choice she makes is harder than the last. What she discovers will change her forever. She knows she will probably die, but Maya has seen enough of death and she won’t let it have her without a fight.”
–Goodreads

Chained is the first installment of Susanne Valenti’s Dystopian YA Fiction series “Cage of Lies” and for an author’s first book this was pretty durn good! I admit the beginning was a bit slow to catch my interests but once they received a sentence to the SubWar I couldn’t stop reading until the end. This book was full of new worlds, action, and a tasteful touch of romance. It was a chalupa full of intrigue dragging me (not unwillingly) from start to finish.

It was fun watching (well reading) the characters explore human life both of the past and outside of The Wall in general because everything is so familiar and obvious yet to them it’s totally foreign. It was excellent to see how the author was able to shift the story so effortlessly from one world (The Wall) to another (the forest/the outside). One a cold gray world of steel, stone, and justice; the other a distorted version of the world we know today (the wilds being a cross between horrifying and enchanting). They’re both so incredibly different places and yet she’s able to weave the story through them seamlessly creating characters along the way helping to build up each location’s reality as well as pushing the plot into thicker water.

The reveal of the government’s conspiracies and lies wasn’t altogether shocking but of course this book is dystopian fiction and so such things are kind of expected.

Personally I found the SubWar an interesting idea for population and behavior control. I mean you can’t just go around killing people just because you can’t house them all but who wants all those rule breakers crowding the space anyway? A fight, or really a war, to the death is an eyebrow-raising but not altogether outlandish idea considering the society’s supposed situation. Lots of ethical questions and discussions could be raised about it, which gives this fictional dystopian society an edge. I mean it’s awful but I like it, it works for this book. (A small detail that caught my eye was a moment in SubWar when the word ‘convicts’ was subtly replaced with the word ‘soldiers.’ Nothing huge or dramatically important but it made me pause. Just something to think about, I suppose).

The way Valenti isn’t afraid of playing with the book’s POVs was great. It was dominated by Maya’s first POV of course but the author wasn’t afraid to split the characters up on missions and keep the readers in the loop of simultaneous action by using another/omniscient POV – sort of like watching multiple security monitors. It kept the action amped up, varied, and moving. Speaking of POVs, the way Valenti introduced Coal was creative. Bringing him in as a random anonymous soldier and introducing this technique of tossing in another POV was different, efficient, mysterious, and utterly intriguing. It drew in the reader with a curious desire to know this stranger and at the same time allowed him to enter Maya’s world with a crashing surprise.

Okay sure this book had a few details, oversights, and inaccuracies that I stumbled across but what book doesn’t?? And it was easy to let the mind glaze over them and charge on with the story. Overall Chained was a satisfying start to a dystopian fiction series. I’m intrigued enough to look forward to reading the rest of the story as it’s written and shared. I’d recommend this book to any reader fascinated by the dystopian YA fiction genre!

Good luck Susanne Valenti and cheers to your debut novel!

I’m a dystopian / sci fi author (that’s the dream anyway) but my day job is a little less creative and a has a bit more catitude. That’s right, I made a terrible cat pun. I work with my family running a boarding cattery (that’s a hotel for cats) and we also help some lovely rescue kitties while they look for their new homes.
-Susanne’s website

Susanne Valenti has revamped her series with all new cover art on March 13, 2016 and again in the fall of 2018!