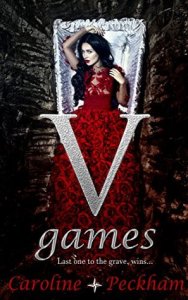 “LAST ONE TO THE GRAVE, WINS.

Being a killer wasn’t what eighteen year old Selena Grey ever expected she’d become. But with her stepfather’s blood fresh on her hands, she finds herself walking into an eight by six prison cell where she’ll live out the next twenty five years of her life.

Or so she thought…

When a man as beautiful as he is terrifying walks into the prison, Selena is the only one seemingly unaffected by his charms. But Varick’s impossibly dark eyes are trained on her and her alone, frightening Selena of what his presence forewarns. It’s not long before she finds out as she wakes on a ship in the dead of night, a captive of the forbidding Varick who seems more beast than man.

But when she arrives at a barren and isolated island in the stormy north sea, she soon realises that the obnoxious Varick may be her only hope of survival. Because, in a place where polar night reigns for the next six months, a powerful and cruel family are about to start this year’s season of the V Games. And Selena is marked to participate in the blood sport, hunted by ravenous vampires and surviving the harsh terrain of the bleak island. And, not only that, but Selena just became the highest bid on contestant in a century…Find out why in Book 1 of the V Games Trilogy”
–Goodreads

Whoaaaaa okay hold up. Vampire books are so hit-or-miss (usually miss) but what I just read was fantastic. Truly exhilarating and creative, I had no idea what I was getting myself into. Choosing to skip all the cliché garbage most vampire stories follow this one saves the romance for another time, too busy battling enemies both human and monster. I’d describe this book as a mix of Hunger Games, Twilight, and Divergent. It’s dark, it’s bloody, it’s exciting, it’s deadly, and its quick pace will keep your eyes glued to the page until the agonizing end.

The book is split between two POVs: Selena (human) and Varick (vampire). With this you get to read two different perspectives on The V Games, which are hosted by the Helsings (hunters). I think this was definitely a good move as a storytelling tactic. It provided a more natural way to deliver background info and explanation without the need for info dumps as well as giving us a wide view of the action.

Selena was sentenced to 25 years in prison for murdering her stepfather. It was self-defense, but who’s going to believe that? Not the courts, obviously. As she crosses the threshold, her mind churning on how she will survive behind bars, a dark and twisted fate whisks her away only to imprison her in a sentence much worse: The V Games. Win and your past will be wiped clean. Lose and…well, you lose by dying. 25 girls have been trafficked to a remote island in the north to compete in this bloodsport for the entertainment of rich, twisted men. And the worst of them all are the psychotic hosts: the Helsing family (ruthless maniacal vampire hunters). What are the Games, you may ask? Release the girls onto the island, give them a location with a deadline, and release a pack of starved vampires onto their heels. And that’s just round one.

Varick has been a vampire since the 1800s and while he’s no fan of the Games he feels no remorse either. He can’t. Cursed he feels nothing. Except hunger and rage. Kept as a slave by the Helsings he helps operate the Games. It’s all routine to him until Selena crosses his path. Her blood sings to him and he has no idea why. In fact, it sings to all the vampires that lock onto it. Determined to help her win if only for his prize (getting to taste her blood) he has to dance a fine line between defying the Helsings and keeping Selena alive. But most disturbing of all is the effect Selena’s blood seems to have on not just him, but the others, and what it could mean.

Honestly even though Varick decides to save Selena, he really can’t do much for her. Any hint of disobedience and the Helsings will torture him or even kill him. So really, for the most part, it’s up to Selena making it through each round of the Games on her own before he can finally help her break free of the hellish island. And I’ve got to say, I really liked Selena as a main character. She’s fierce but…normal. Half the time she was only surviving off of sheer luck or helpful friends. But as the Games progress so does she and by the end she’s a truly formidable opponent, even without a vampire and a lone wolf by her side.

I’m often hesitant with the whole vampire thing but I really liked how it played out in this book and I honestly look forward to reading how it unfolds in the rest of the series. This book takes a much more traditional look at vampires with a few modern adjustments, injecting the story with ancient lore mixed in with how they’ve adapted over time.

Best of all, to me anyway, was how the absolute main focus of this book was the Games. Sure there’s Varick and the Helsings and all the plotting and secrets they contain, but above all was Selena trying to survive the Games, trying to make it through one round at a time. And it was honestly fantastic how there was equal time spent on Selena and the other girls, not just Selena and Varick. We get to see how the others compete, react, bond, etc. and it really rounded out the story keeping it from being one-note and cliché. I’m really looking forward to more of Selena and Varick but for the first book I’m glad it wasn’t the whole focus.

If you’re at all a fan of paranormal stories and vampires then definitely give this book a shot.

An exhilarating and deadly twist on Vampires and Hunters, The V Games will keep your attention locked in with horror and intrigue from start to finish. Risky, bloody, and addictive, witness just how far someone will go to survive as men become monsters and monsters become men.

Check out the rest of the series! V Games: Fresh from the Grave (book 2), V Games: Dead Before Dawn (book 3)

Caroline Peckham is the author of The Rise of Isaac Series and upcoming V Games Trilogy.

Caroline lives in the south east of London with her best friend and a little rescue cat. When she’s not writing, she’s binging Netflix shows, going to the gym or at the pub pretending to be cool.

She adores her fans and loves to hear from them personally. She’d love for you to reach out to her on Facebook, Instagram and Twitter!
-Goodreads