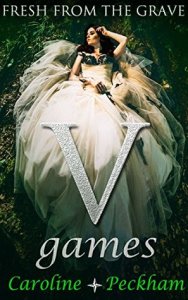 “Selena Grey has faced death and won. Freedom awaits so long as she can let go of the last thing that ties her to the island where the V Games were held. But despite the fact surviving has always been her priority, suddenly, she finds herself torn between her head and her heart.

Meanwhile, the Helsings are about to host a brand new game on the Isle of Lidelse where blood and money rule above all else. But when Selena finds out a devastating truth that puts her loyalty to the test, will she find the courage to go on? Or will she retreat from a life she never wanted, even if that means giving up the one person her heart beats for?”
–Goodreads

This was definitely one thrill of a sequel. Not only do we get more of the savage games, determined survivors, and wild vampires, but werewolves storm the cast as well.

This book has several different POVs that it’s told from and despite everyone being split up in this book I really liked how it allowed us to see different pieces of the characters. For instance I loved learning about Varick and Jameson’s friendship as well as more insight into their characters. We also got to spend more time delving into the psychotic personas of the Helsing children which just added a whole other layer of creepy to the plot. Truly, the Helsing family immediately earns themselves a spot on my list of most-hated characters haha.

Varick’s best friend, Jameson, we learn is a werewolf also captured by the Helsings and because of this Selena makes a pact with his pack to get back onto the island to bust their friends out. Does everything go smoothly and according to plan? Definitely not. But did they really think it would? It was cool to get a glimpse of the wolves but I’m definitely looking forward to spending more time with them to understand them better.

For example, a Hunter named Ulvic is in charge of Jameson’s pack, which seems bizarre to me but I’m sure we’ll learn more about this later, and despite him sailing to the bloody island with Selena on his heels to rescue his imprisoned Alpha (Jameson) he really disappointed me as a person. He’s so unbearably weak. U G H. So really despite him boasting of weaponry and badassery all his plan did was land Selena in the Games for round two and once again it fell to Selena, her friends, and Varick to rescue everyone. Although, okay, Ulvic does come through in the very end. But still…*judgmental side-eye* haha

As twisted as they are I gotta say that the V Games are always a standout in these books. Totally psychotic and twisted for certain but I can’t deny the action and thrill they bring to life. For a book. No way do I want this to be in any way real. *shudders*

Peckham has managed to create new obstacles and crazy plans for Selena and her friends to navigate in this book. Varick is being drained into a mindless monster, Jameson is injected with a drug to keep him in a vicious wolf-form, Selena is tossed once more into the Games, characters are resurrected and characters are slaughtered, and they’ve all got kill-switches implanted in their heads forcing them to play along or die. Despite the odds being heavily stacked against them they manage to slowly form alliances, grasp onto hope, and crescendo the island into revolution.

V Games: Fresh from the Grave is definitely a bloody thriller of a sequel and I can’t wait to read the last book in the V Games trilogy (although there are more books that will dive into the lives of other characters that will continue the series). If you’re on the hunt for a story teeming with the supernatural but prefer one high on the stakes with a dash of romance to keep ’em there then definitely look into this series because so far it’s been one danger of a ride.

Check out the rest of the series: V Games (book 1)

One thought on “V Games: Fresh from the Grave”