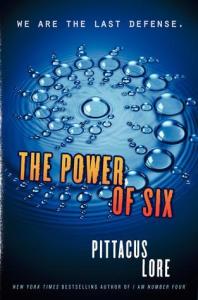 “I’ve seen him on the news. Followed the stories about what happened in Ohio. John Smith, out there, on the run. To the world, he’s a mystery. But to me . . . he’s one of us.

Nine of us came here, but sometimes I wonder if time has changed us—if we all still believe in our mission. How can I know? There are six of us left. We’re hiding, blending in, avoiding contact with one another . . . but our Legacies are developing, and soon we’ll be equipped to fight. Is John Number Four, and is his appearance the sign I’ve been waiting for? And what about Number Five and Six? Could one of them be the raven-haired girl with the stormy eyes from my dreams? The girl with powers that are beyond anything I could ever imagine? The girl who may be strong enough to bring the six of us together?

They caught Number One in Malaysia.
Number Two in England.
And Number Three in Kenya.
They tried to catch Number Four in Ohio—and failed.

I am Number Seven. One of six still alive.

And I’m ready to fight.”
–Goodreads

Book One: I AM NUMBER FOUR

I really enjoyed I Am Number Four and so I was excited when I grabbed my copy of The Power of Six (although the slightly OCPD nerd inside me wanted it to be number 5 haha).

I opened it up and expected to pick up where the first book had left off and it did and it didn’t. This book is told using two different POVs: Number Four’s (like the first book) and Number Seven’s. And actually this book focuses mainly on Marina (Seven) and her story up through to when she hears about the insanity that went down in Ohio (ahem, John). While it mostly explores this new character Marina it also spends a good chunk of time following Four, Six, and Sam after they fled Ohio. By nearly the end of the book the two POVs merge into the same time and space and an epic battle inevitably ensues. Huzzah!

(Oh and in case you’re wondering about what the “Power of Six” is well this title is almost a double entendre because yes Six is powerful and still totally badass but the title is also referring to the fact that there are only six of the original nine lorien children left that escaped when their planet came under attack and they discuss their plan to unite all six and use their combined power to save Earth.)

When they’re done well I’m almost always a fan of multiple POVs in a story. Not more than three though because then things honestly just start getting tangled, confusing, and ridiculous, and ain’t nobody got time for that. The author, fortunately, did indeed write this whole varying POV story quite well and he was able to keep you in the action no matter where in the globe it took you whether it was Marina being stifled in Spain or Four getting his butt kicked by Six in the US of A.

It was nice adding in some new blood with Marina and I really liked her. She was relatable, funny, and overall quite likeable. We never hear much about One, Two, or Three other than how they died and maybe a super feat they did that got into a newspaper or two so it was cool that after learning Four’s story we got to hop on another train and learn someone else’s story. Pittcaus Lore is making it clear that saving Earth is a group effort not to be reigned by one superstar and his sidekicks.

Learning more about Six was much appreciated as was following their path from Ohio. The only thing I wasn’t really a fan of was the really convoluted love triangles. Four loves Sarah but has a growing crush on Six, Sarah is a turncoat of sorts which irritated me (I just want Four and Sarah to live happily ever after! Haha although I honestly loved in a way how she changed and gave us a bit of insight into what the “others” the “non-heroes” have to deal with when a hero-villain war invades their mundane lives), Six has a growing crush on Four but also has a liking for Sam but mostly is still in loner self-preservation mode (understandable). Sam has a major crush on Six. Well now that you’re caught up on that front…

I will say that this book contains a twist. I mean it contains a few throughout the plot but one major twist is revealed in Spain and it’s pretty awesome.

So yep, The Power of Six continues the quest to save Earth (and eventually Lorien) via Four’s group and weaving in a few new but key characters. In summation, Marina is great, the introduction of a surprise Lorien is awesome, Six is still killing it with style, John is still high school boy John, Sarah is unimportant really, Sam is still lovable Sam. The book ends with an epic battle, which is great.

An entertaining sequel, different from the first book and yet filled with the same cadences and rhythms that keep you absorbed in the story and ready for the next book.

P.S. Just throwing this out there, I read most of this series in high school and I think that’s a good age to read these. I mean the movie is AWESOME for all but the books fall more into the teen fiction range.

Purchase here: The Power of Six