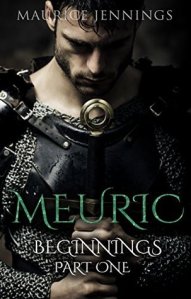 “In the world of Terit’re, where the gods and magic exist, a secretive band of warriors known only as Knight Protectors, are tasked with defending the people of the world against the evil of the dark gods.

A new evil arises; the rules have changed. One by one, the warriors are assassinated. Faeder, ruler of the New Gods, learns of a future where they are all wiped from existence by this new dark force – and so his race for Terit’re and all of their futures begins.

Forbidden to influence events directly, he reaches out to two warriors to fight his cause. But can they be trusted? One is a former Knight Protector who now hates the organisation that created him. The other is a soldier who fights for this new evil.”
-Goodreads

Jennings writes an interesting story wedged firmly within the classic realm of fantasy. Knights, sword fights, seers, gods, tyrants, magic, and honor-bound duty rumble around this well crafted world that has been built on the page. It might be a bit stiff to get into but if you’re a fan of undiluted fantasy then the action will pull you right in and the swift words will sustain you as you leap from page to page.

The characters are intriguing and complicatedly designed. Meuric is a born fighter and a great knight destined to die in duty. The world surrounding him and the events spiraling rapidly are all fleshed out with an acute attention to detail. Jennings even provides a character list as well as a lexicon at the opening of the book.

The book opens with a vision, a nightmare that plagues Meuric’s nights, before rewinding itself and dropping the reader before twelve-year old Meuric and allowing this younger version to reveal the unique gifts that roil within him. Swept up with the mysterious looming future you follow Meuric through training and through battle as he’s tested by fate.

Can Meuric, the Hand of Death, defeat the Expelled One? Can the Roz’eli Men-of-the-Legion be stopped? What will come of the once mighty Knight Protectors?

Complicated, determined, classic, Meuric: Beginnings: Part One envelopes its readers into a realm of fantasy, challenge, and blood.