“The Great Network is an ancient web of routes and gates, where sentient trains can take you anywhere in the galaxy in the blink of an eye. Zen Starling is a nobody. A petty thief from the filthy streets of Thunder City who aimlessly rides the rails of the Network. So when the mysterious stranger Raven offers Zen a chance to escape the squalor of the city and live the rest of his days in luxury, Zen can’t believe his luck. All he has to do is steal one small box from the Emperor’s train with the help of Nova, an android girl. But the Great Network is a hazardous mess of twists and turns, and that little box just might bring everything in this galaxy — and the next — to the end of the line. The highly anticipated novel from Carnegie-medal-winning author Philip Reeve, Railhead is a fast, immersive, and heart-pounding ride perfect for any sci-fi fan. Step aboard — the universe is waiting.”
–Goodreads

Thank you to the publisher & NetGalley for sending me a copy to review!

Yas!! Science Fiction has resurged in my soul!

I grew up a fan of Doctor Who, Lost in Space, Star Wars, Star Trek, and the like largely because my dad is a giant sci-fi fan but I fell in love with it too. Admittedly my heart lies largely with the fantasy genre but there’s always been a soft spot, a thrum of excitement over a good sci-fi story. It’s been a little while since I’ve truly enjoyed a good science fiction book but here one is! I’m quite pleased with how this book turned out! It sort of made me think of the television show Dark Matter (which you should totally watch if you haven’t already!) but with trains instead of ships and with a tinge of Guardians of the Galaxy except that there’s no team, just a boy and the allies he scrapes up as he rushes along. But the feeling and atmosphere felt similar to me.

Mystery, robots, space travel, crime, action, and a perfect touch of romance, this book is a must-read for sci-fi fans and a good introduction for sci-fi newbies.

Broken into three parts, each leaving you more breathless than the last, Zen’s adventure draws you and him alike into this mysterious space world as you fall deeper and deeper into an addiction, a need to know.

Characters spring from the pages each unique, utter intriguing, and just as varied as the numerous worlds and planets Zen travels to.

The world building in this book is well done and plenty of fun as it balances that line between familiar and inventive blending the two traits to create a futuristic world that awes, exhilarates, and dances in a dreamer’s realm of possibility.

Not overly technical or filled with so much science-speak or tech-babble that readers get lost or bored but there is enough to support the world created and provide explanation for this setting that we readers are dropped into.

The main mode of transportation in this book/futuristic world is trains. I love this idea because trains were the first truly great pioneers across America showing human dominance and triumph over the land. Trains changed everything about the growth and future of this country and it feels right for them to be an enduring force in this new space age. I also love the prominence of trains because I have an odd fascination with them. Trains are my favorite mode of transportation, which is perhaps silly seeing as I only rode one once when I was 4 years old in England. Regardless of that factor trains have awed and excited me my whole life and to have them tied into an epic space adventure? Brilliance. If I lived in this fictional world I’d definitely be a railhead content to ride until the end of the line.

Quirky, intriguing, kinetic, and classic this sci-fi story will reside beloved within the hearts of science fiction fans and draw in readers from other genres showing them an exhilarating story and permanently winning sci-fi a spot in their bookish hearts. Grab a copy of Railhead and settle into the buzz of anticipation for a journey across the universe. 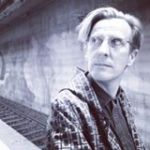 Philip Reeve was born and raised in Brighton, where he worked in a bookshop for a number of years while also co-writing, producing and directing a number of no-budget theatre projects.
-Goodreads