“For fans of We Were Liars, The Girl on the Train, and Gone Girl, this powerful psychological thriller with multiple mysteries is set against the backdrop of the megawealthy elite of New York City. Toten delves into the mesmerizing yet dysfunctional world of those who manipulate but seem ever so charming. With its gripping pace and Hitchcockian twists, Beware That Girl will keep readers guessing until the very last line.

The Haves. The Have-Nots. Kate O’Brian appears to be a Have-Not. Her whole life has been a series of setbacks she’s had to snake her way out of—some more sinister than others. But she’s determined to change that. She’s book smart. She’s street-smart. Oh, and she’s also a masterful liar.

As the scholarship student at the Waverly School in NYC, Kate has her work cut out for her: her plan is to climb the social ladder and land a spot at Yale. She’s already found her “people” among the senior class “it” girls—specifically in the cosseted, mega-wealthy yet deeply damaged Olivia Sumner. As for Olivia, she considers Kate the best friend she’s always needed, the sister she never had.

When the handsome and whip-smart Mark Redkin joins the Waverly administration, he immediately charms his way into the faculty’s and students’ lives—becoming especially close to Olivia, a fact she’s intent on keeping to herself. It becomes increasingly obvious that Redkin poses a threat to Kate, too, in a way she can’t reveal—and can’t afford to ignore. How close can Kate and Olivia get to Mark without having to share their dark pasts?”
–Goodreads

The story is prefaced with a quote from Mary Howitt’s poem: “Will you walk into my parlour?” said the Spider to the Fly.

When I read that, I knew this story was going to be insane.

My friend, Jenna, read this book and then sent me a Snapchat of just this totally WTF face. I laughed so hard and then instantly hunted the book down in the closest bookstore. It totally warped her mind. I asked her if it was good and she said she really didn’t know because she was still processing it. I took that as a sign that I needed to read this book. I love those crazy messed up psychological stories that totally play with your head and leave you breathless and questioning life. Oh yeah, I had to get my hands on this book.

To describe the story in broad strokes I’d say it’s like Gossip Girl but more twisted, calculated, and insane. It takes New York City’s Upper East Side and darkens it blacker than a moonless smog-filled night. We all know that wealth that vast can cause a whole array of scandal and issues, but this book steps out of the kiddie pool and slips on a sexy number desperate and ready to join the adult swim.

The story was as expected, except for the unexpected. Rich girls at a private school? Check. Hard-working but thankfully beautiful scholarship girl? Check. Crazy plot that’s escalated thanks to intense wealth and all the strings that come with it (i.e. image/perception/reputation)? Check. The main conflict/plot line in this book wasn’t totally expected, but it wasn’t really unexpected either considering the book’s summary/blurb doesn’t go out of its way to hide it. We saw it coming, is all. Maybe not quite to the extent that it did, but in general we could see it coming. And from there we could also see how it would end. The subtle, creepy subplot line, however, only glimpsed through the cracks in the pages every once in a while at a slow but concerning pace.

Look. The main ending of the book made sense. You know it had to happen, but then Toten goes one step further inserting just one more twist in the story and as you read that last chapter, that last page you drop your jaw as your mind recoils from whiplash and you sit there incapable of forming sentences or complete thoughts. You are left there floundering in betrayal and choking on stymied emotions as the story you thought you knew rips off the final mask of the characters you thought you understood.

It almost uses one’s secret arrogance against them. You step into the story, allow a few chapters to wash over you as you get your bearings on who’s who and what’s what, then you begin deciphering the author’s motives and clues as you piece together who and what is really the who and what of the plot. You suspect, you guess, you piece it together, and you come to cocky conclusions at various speeds. And while you may be correct, you are also very incorrect. Some elements are predictable, some are a surprise, and yet even when your modest confidence and humble intelligence have locked in on a solid play for the end, that becomes your downfall.

Your mind will spin until it figures everything out. It will race trying to reach the finish line before the pages run out and the author spells it out for you. And you’ll be so busy trying to not be fooled, to not be surprised, to be totally had that you’ll miss it. Maybe not entirely, maybe you’ll have little lurking suspicions in the back of your head like I did throughout the book and towards the end, but you’ll be so distracted by the bigger picture that when you read that final chapter, and read that final page, that you’ll feel hit by a truck. You should have seen it sooner. In fact you probably did see it sooner. It’s just, so much was going on that you never let those little uncomfortable pricks of clues flourish and factor into your nice little package of a crazy ending.

…Yes, I do realize I just spent hundreds of words trying and failing to adequately describe what I’m thinking and feeling about this book right now without actually spoiling anything for you (how maddening this must be to read!). Professionals might suggest waiting a while and allowing my emotions to settle down before writing a review, but I don’t get paid so I’m not a professional therefore I can do whatever I want. True sometimes it makes my reviews a bit rambly, but it’s more fun to write when you’re amped up and energized (or woefully flat-lined) by a book’s finale.

Either way, I should move on…

Characters! The book is told in alternating POVs via the two protagonists: Olivia and Kate. When you read the title “Beware That Girl” your first reaction might be “What girl?” or in this case “Which girl?” and that’s a gut reaction. Trust your gut. Both are interesting characters full of secrets and they easily keep up the pace of the story. It was difficult to put this book down. The short chapters skipped through time keeping you gripped and unable to stop. I liked both Olivia and Kate. I don’t want to say anything more, so you’ll just have to read it and find out. But I did like those characters. They were well written.

Gah! The signs were there! They were there from the very beginning! From the very first page! If only she’d seen it sooner… But no more on that for fear of spoilers.

Mark Redkin? I don’t want to talk about him either.

The smaller characters are sometimes my favorites. In this case I really loved Johnny and Mrs. Chen. There were other good supporting roles but those two really charmed me. Johnny: at last someone decent in this world! Mrs. Chen is a strict, tiny woman who, despite her size, looks like she could kill anyone who dared touch her fruit stand without permission. Despite her brusqueness I really liked her. You’ll just have to read the book and see what I mean.

If you’re into psychological thrillers then definitely add this to your TBR list. Just do it. You’ll be surprised (or at least entertained in a thriller way) by where it takes you as you figure out who’s the who and what’s the what.

Beware That Girl is a dark and twisted psychological thriller that takes even the Upper East Siders to new heights. Dressed up in promise, highlighted with secrets, and designed with insanity, this story will take even cockroaches to the limits of their own survival.

P.S. Always call the cops. You’ll come up with a reasons why you shouldn’t but don’t listen to those. Always. Call. The cops. Document everything. Confide in someone. And when it hits the fan always call the freaking cops.

Similar Recommended Reads: The Walls Around Us by Nova Ren Suma, Pretty Wicked by Kelly Charron 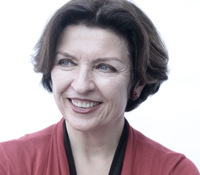 My earliest and most fervent ambition was to grow up and take my rightful place among the other mermaids. When cruel and insensitive adults crushed that dream by insisting that mermaids did not exist, I settled on the more mature aspiration of becoming an intergalactic astronaut. Then I realized that math would likely be involved. So, in the end, I went to Trinity College at the University of Toronto where I got a BA and then an MA in Political Economy taking great care not to take a single English or Creative Writing class. The only thing I knew for sure was that I was never ever going to be a writer. That would be silly, fanciful and well, unrealistic. And then I started to write…
-Goodreads