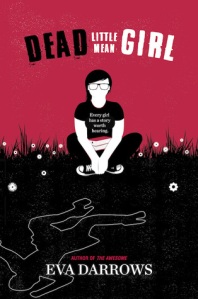 “Quinn Littleton was a mean girl—a skinny blonde social terrorist in stilettos. She was everything Emma MacLaren hated. Until she died.

A proud geek girl, Emma loves her quiet life on the outskirts, playing video games and staying off the radar. When her nightmare of a new stepsister moves into the bedroom next door, her world is turned upside down. Quinn is a queen bee with a nasty streak who destroys anyone who gets in her way. Teachers, football players, her fellow cheerleaders—no one is safe.

Emma wants nothing more than to get this girl out of her life, but when Quinn dies suddenly, Emma realizes there was more to her stepsister than anyone ever realized.

A meaningful and humorous exploration of teen stereotypes and grief, Dead Little Mean Girl examines the labels we put on people and what lies beyond if we’re only willing to look closer.”
–Goodreads

Wow. Seriously?? Quinn is just…I have to hold tightly onto the fact that she’s a fictional character or risk losing my mind because gahhhhhh…but it really is so true and something we don’t tend to think about. I honestly try my best to remember that there is always a reason. It’s probably one of the hardest things to do when someone is being hurtful but I do believe that no one is born evil, and that no matter how horrible they are that there is at least a reason for it. Does that reason excuse them? 1000% no. But it’s still very important to understand and try to give people what they need even when they deserve it the least.

Quinn is seriously one of the worst characters ever but she had a story and no one heard it or even cared to find out what it was. Yeah there’s an infinite amount of things she could have done better but Emma is right, it’s too late for what Quinn could have done and besides it’s not the point. What matters is what everyone else could have done no matter how little she ever deserved it and it’s that guilt that festers in good people’s hearts when any chance of change is taken from them. Would it have helped though? Well, they’ll never know. Evil people are sort of a problem with no clear solution.

Overall this was a quirky, amusing, and oddly insightful story full of family, high school, friendship, romance, love, hatred, and regret. Emma’s voice came across as sharp and almost witty making it a quick read with a relatable feel. This book really takes “quiet nerd” and “mean queen” to a whole entirely new level.

Contemporary, quirky, and dark humored with a surprising spike of depth, Dead Little Mean Girl speaks volumes to teens and the world that swells around them.

Eva Darrows is Hillary Monahan is also an international woman of mystery. Holed up in Massachusetts with three smelly basset hounds, she writes funny, creepy things for fun and profit.
-Goodreads