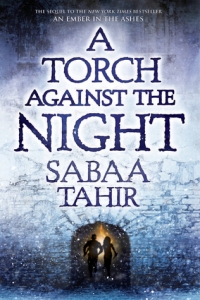 “Elias and Laia are running for their lives. After the events of the Fourth Trial, Martial soldiers hunt the two fugitives as they flee the city of Serra and undertake a perilous journey through the heart of the Empire.

Laia is determined to break into Kauf—the Empire’s most secure and dangerous prison—to save her brother, who is the key to the Scholars’ survival. And Elias is determined to help Laia succeed, even if it means giving up his last chance at freedom.

But dark forces, human and otherworldly, work against Laia and Elias. The pair must fight every step of the way to outsmart their enemies: the bloodthirsty Emperor Marcus, the merciless Commandant, the sadistic Warden of Kauf, and, most heartbreaking of all, Helene—Elias’s former friend and the Empire’s newest Blood Shrike.

Bound to Marcus’s will, Helene faces a torturous mission of her own—one that might destroy her: find the traitor Elias Veturius and the Scholar slave who helped him escape…and kill them both.”
–Goodreads

Book One: AN EMBER IN THE ASHES

A Torch Against the Night is not as flawless as the first book but it’s a compelling sequel nonetheless and it carries you to an ending that leaves you bold and ready to read the ultimate conclusion to the series (I can’t believe we have to wait until 2018!).

This series is an intriguing blend of tradition, superstition, war, and honor. It’s as realistic as can be filled with the bloody brutality of the Roman empire and finished with a dash of magic and tales folded in. It’s well written so that even the surprises you guessed were coming are still rather exhilarating to read.

Clever, riveting, tragic, dramatic, colorful, impactful, exploding with action, plot twists aplenty, it ensnares the senses, and it is original indeed. Overall I agree with most reviews that this is a strong series that makes for an excellent read. In fact part of me wanted to clear my schedule to read this book all in one shot but at the same time my heart was so nervous for these characters and their fates that I found myself reading it in small doses!

Okay, so down to some non-spoiler specifics.

There are three POVS in this book: Laia, Elias, and (drum roll) Helene.

I absolutely loved reading Helene’s POV. Her voice brings a whole other perspective to the chaos that has erupted in the empire. The painful battle of loyalties that rage within her is palpable and brings a perfect level of tension to the surface with every page.

Something I like about the style of these books is that it’s difficult to pinpoint any single ruling character. Even with the first book there was no clear “main character” or lone protagonist. There are alternating POVs that give certain characters a bigger role in the story than others but between them their parts are equal. It’s fascinating how interconnected their fates and choices are even when they don’t know it. Adding Helene’s POV just drives this point further.

The multiple POVs also allow the story to spread out geographically while the plot remains superbly focused. I love how stories in singular first person can attach you to that character and take you on their journey but for some stories that are in some ways larger and more complex this usage of alternating first person accounts is ideal. I’d actually love to have had The Hunger Games written with alternating POVs to get a more interesting view of the world but even so with just Katniss’ POV we get a really focused and in-depth view into her head and how this one girl interprets, reacts, and ignites the world around her. It’s just a style choice but for this series the varied POVs really work perfectly.

Although this book continues Laia and Elias’ story, in many ways this book spotlights Helene’s journey most of all. Or perhaps it just feels that way because this is the first time we really get to spend time with her and rummage through her head.

Overall I really became more intrigued by Helene than I did with Laia. I think Helene undergoes a much more dynamic and generally more interesting arc than Laia this round. While Laia was captivating in the first book and Helene an interesting secondary character, in this book their roles almost switch with Helene navigating through impossible choices that have me gripping my seat while Laia plods on with her one unwavering goal: save Darin.

The characters in these books are great. They’re really thought out and easily come alive on the page. Helene is ice cold but with a heart still beating somewhere deep inside the icy cage she’s built around it. She’s loyal to the end; she just has to decide who or what that loyalty serves. Elias is the deadliest goodhearted man in the series and he lets nothing, and I mean nothing, stand in his way from fulfilling a promise and keeping his honor. Laia is a girl full of fire and loyalty who charges forwards with unwavering determination despite the sweetness that flavors her essence.

Keris is whip smart and simply pure evil, as usual, and the Warden hides in his dungeons feasting on delicious pain and harbored secrets. And then there are many many other characters that are equally captivating but to list them all would make this already lengthy post even longer (e.g. The Soul Catcher – she’s an unexpected character but utterly fascinating and mysterious but I don’t want to give anything away for you).

So what of that budding romance between Elias and Laia that we barely got to muse over in the first book? Well this isn’t a romance series so it’s no surprise that it continues to burn slowly and take a backseat to the war that is bubbling on the horizon. An “obstacle” between them named Keenan never honestly concerned me but he’s quite persistent so be ready for him to pop up in Laia’s life again.

Personally I find the swing back and forth between Keenan and Elias unconvincing. It’s far too clear that Laia has deeper feelings for Elias than she does for Keenan and yet she’s quick to accept Keenan’s comforts and caresses all the while trying to convince herself that she loves him even though literally every time she looks at Elias she ignites. Elias makes her feel strong and beautiful and hopeful and safe and yet she doesn’t mind taking in Keenan’s kisses and murmurs. I know Elias’ fate is all but certain but even so… I dunno, but over the course of these two books I felt far more convinced of a connection between Laia and Elias than whatever wishful thinking plays between Laia and Keenan. I’m not a fan when characters act so fickle. It comes across as weak. And maybe that was an intentional character/plot choice but it just didn’t work for me.

Another note on Laia without spoiling it for you: She gets played. She lets her softness betray her and while part of me admires her enduring goodness despite the bloodshed and heartache she’s had to suffer through the more shrewd and cold part of me tsks at her foolishness. She got played. I bet if Elias hadn’t been so distracted by his own doom then he would have pieced together his suspicions much sooner. And although there’s no way she could have seen it coming in a million years she still felt all the uneasiness and warnings but ignored them all anyway. She decided to give in to distraction. Yeah maybe she’s sad and scared and it was all a very clever ploy or whatever and so she latched onto this with hope but nah, I just wasn’t convinced. Like I said, her character has some serious weak moments in this book. It’s definitely a great twist but unfortunately it didn’t shock me. I simply nodded and found that I’d expected as much without even realizing it. (If you haven’t yet read this book then you’re probably completely confused but if you read it then you’ll get it. I hope. Haha)

To be fair Helene also keeps getting backhanded by surprise but at least in her case I felt that it was a genuine blindside. Or maybe it’s just because Helene’s character acts so driven and focused and quick that to see her shocked makes more of a convincing impact.

A Torch Against the Night is definitely well written and full of clever twists but if you read as many clever books by clever authors as I have then it becomes quite difficult to surprise me. Still a fantastic series though and one that I’d highly recommend! I can’t wait to see how it all ends.

Purchase here: A Torch Against the Night

Check out the rest of the series: An Ember in the Ashes (book #1)

Similar recommended reads: The Queen of the Tearling by Erika Johansen