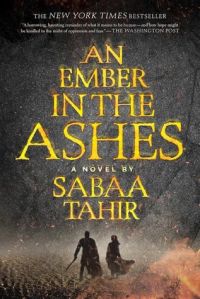 “Laia is a slave. Elias is a soldier. Neither is free.

Under the Martial Empire, defiance is met with death. Those who do not vow their blood and bodies to the Emperor risk the execution of their loved ones and the destruction of all they hold dear.

It is in this brutal world, inspired by ancient Rome, that Laia lives with her grandparents and older brother. The family ekes out an existence in the Empire’s impoverished backstreets. They do not challenge the Empire. They’ve seen what happens to those who do.

But when Laia’s brother is arrested for treason, Laia is forced to make a decision. In exchange for help from rebels who promise to rescue her brother, she will risk her life to spy for them from within the Empire’s greatest military academy.

There, Laia meets Elias, the school’s finest soldier—and secretly, its most unwilling. Elias wants only to be free of the tyranny he’s being trained to enforce. He and Laia will soon realize that their destinies are intertwined—and that their choices will change the fate of the Empire itself.”
–Goodreads

Life is made of so many moments that mean nothing. Then one day, a single moment comes along to define every second that comes after. Such moments are tests of courage, of strength.

I originally slouched away from this book because a) I didn’t know much about it except seeing its name everywhere and b) there was a ton of hype out there that only raised my expectations. The second book was recently published and I finally took a deeper look into this series. Actually, no, not really. I was at Barnes & Noble, I saw this book that everyone kept talking about, and I decided what the heck just buy it. I am so glad that I bought it, but also that I waited to get some distance from the hype. I was able to just read the book for the book with few expectations and I loved it.

I’d rather die than live with no mercy, no honor, no soul. -Elias

This book was full of action, suspense, danger, twists, and the tinkering of the mythological. The set up of the story was interesting to begin with but throwing in the Trials and the Augurs only made it more so. I was already intrigued but the announcement of the Trials was a turning point and from then on I was utterly captivated as the plot faced even more challenges than could have been foreseen. I suppose in some ways I get why some people felt this book was a bit slow, but personally I was so enthralled that it flew by for me.

The whole book is told in alternate POVs that change each chapter going back and forth between Elias and Laia. I loved this technique and it worked incredibly well with the story. Two different points of view from two totally different people in different places doing different things…until their worlds inevitably collide.

Altering POVs let me get to know Elias and Laia separately as well as insight on their views of each other. It’s always a huge plus of interest for me when I get to read different accounts of the same event or person.

There are two kinds of guilt: the kind that drowns you until you’re useless, and the kind that fires your soul to purpose. -Spiro Teluman

Furthermore, every chapter ends on a freaking cliffhanger! Tahir likes to end each chapter in the midst of an action, emotions, or revelation, which kept the plot moving swiftly as well as maintaining an addicting level of excitement and suspense (a good TV technique, actually). But yes, right when we reach a pinnacle or change in a scene it cuts off and switches us to the other character and picks up where their storyline left off. This made it extremely difficult to put down this book because every time I told myself I’d stop at the end of the chapter I was left dangling off a cliff with a huge need to know what happens next and so I just had to continue on. I’m not complaining. Not one bit (: It was thrilling and exactly what I love about good books.

I loved Elias and Laia. They were strong protagonists and Tahir gave them difficult but real challenges and decisions to make in a world so twisted and masked. They each had a very strong character goal that guided their every choice and propelled them through this story drawing me into their personal causes. I’d back both of them without a second thought. Through the eyes of the other we see their actions, but through their own eyes we witness their heart. Actions may speak louder than words, but they mean nothing without the motive behind them.

All the characters were well written, appropriately complex for such a world, and intriguing in their own way. I mourned for Zak, I tilted my head curiously at the Commandant, I shook my head pityingly for Marcus, I smiled secretly at the Augurs, I curled protectively over Izzi, I nodded solemnly at Cook, I hoped for Keenan, I scrunched my eyes with suspicion at Mazen, and I closed my eyes sadly for Helene. So many characters with so many stories. But really, the Commandant, the Masks, Markus, that whole school is pretty twisted and messed up. And poor Helene, she really ends up in quite the Eponine-Marius-Cosette (from Les Misérables) triangle, now doesn’t she?

The field of battle is my temple. The swordpoint is my priest. The dance of death is my prayer. The killing blow is my release. -Elias

So many complex characters! I’m telling you! I truly cannot wait to see how this series plays out because there is quite the complex puzzle of loyalties, duties, beliefs, and motives in this story. It think it all worked because Tahir kept her plot tight and laser focused. She didn’t have wandering story lines or characters with meandering hearts. Everything was crisp, strong, and quite intent even when the circumstances shifted beneath their feet or knocked them down.

Oh, and just to put my two cents in, here’s what I’ve learned from reading a bajillion books and following the news: Never trust organized political groups. It’s almost always a terrible idea. I understand that people might be desperate or need a cause to grasp onto lest their hope flicker and die. But don’t trust the government and don’t trust the rebels. Do I sound like a crazy conspiracy theorist yet? Haha probably, but it’s actually pretty accurate advice. Just…be cautious, have a healthy (not crazy) dose of skepticism and don’t be so ready to instantly accept what they tell you. While both the officials and the rebels chant traditions as they stand on their platform built on vows, as something grows so does the power it can possess and inevitably greed will take over. Everyone has an agenda. Never trust someone who says otherwise. (An agenda can be either bad or good, but it’s still there. Motive. A person without intention is a person adrift.)

Overall this book moved very quickly and is quite spectacular. It was a story I didn’t even know I was waiting for. I can’t wait to read what happens next!

An Ember in the Ashes twists with hidden intentions, roars against injustice, and charges forwards into the dawn. Fierce, mystical, and simply magnificent, this book is a must-read for any fantasy fan.

Purchase here: An Ember in the Ashes

Check out the rest of the series: A Torch Against the Night (book #2)

Sabaa Tahir grew up in California’s Mojave Desert at her family’s 18-room motel. There, she spent her time devouring fantasy novels, raiding her brother’s comic book stash and playing guitar badly. She began writing An Ember in the Ashes while working nights as a newspaper editor. She likes thunderous indie rock, garish socks and all things nerd. Sabaa currently lives in the San Francisco Bay Area with her family.
-Goodreads

9 thoughts on “An Ember in the Ashes”