The Star-Touched Queen by Roshani Chokshi (2016) 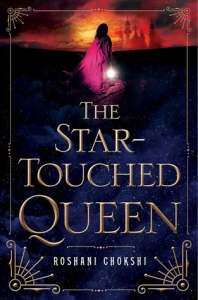 “Fate and fortune. Power and passion. What does it take to be the queen of a kingdom when you’re only seventeen?

Maya is cursed. With a horoscope that promises a marriage of Death and Destruction, she has earned only the scorn and fear of her father’s kingdom. Content to follow more scholarly pursuits, her whole world is torn apart when her father, the Raja, arranges a wedding of political convenience to quell outside rebellions. Soon Maya becomes the queen of Akaran and wife of Amar. Neither roles are what she expected: As Akaran’s queen, she finds her voice and power. As Amar’s wife, she finds something else entirely: Compassion. Protection. Desire…

But Akaran has its own secrets — thousands of locked doors, gardens of glass, and a tree that bears memories instead of fruit. Soon, Maya suspects her life is in danger. Yet who, besides her husband, can she trust? With the fate of the human and Otherworldly realms hanging in the balance, Maya must unravel an ancient mystery that spans reincarnated lives to save those she loves the most. . .including herself.

A lush and vivid story that is steeped in Indian folklore and mythology. The Star-Touched Queen is a novel that no reader will soon forget.”
–Goodreads

What a fiery tale I have just read! A gorgeously creative mix of Indian folklore and mythology this book takes the story of Persephone and Hades and transforms it into a new world entirely.

Exquisite world building in this book. Truly! I could envision each place, each moment, each creature or character so clearly. Every aspect was simple yet infinite. The language in this book is intelligent, delicately lush, finely woven, and utterly beautiful. They say a picture is worth a thousand words, but a thousand of Chokshi’s words captures far more than a single picture.

Chokshi’s grasp of language is akin to that of an artist and their beloved paints. Each word is a color. Each sentence is a brushstroke. Images, sounds, tastes, smells, textures, and emotions are woven throughout the canvas of each page soaking up the story and capturing the reader’s heart with it.

I was captured from the first page. Maya’s story quickly tips into an unwanted wedding, cascades into another realm, and rushes forth with all the thrilling bends of a churning river. A story where pure fantasy stands solid and clasping hands with sharp reality. From the edible jewel fruits of impossible trees in the Night Bazaar to the dusty ash on the feet of a false sadhvi a new world unfolds and sings its sweet dark song lulling the reader into its enchanted depths.

Each moment, each word, each soul rang true.

I don’t want to write too much and risk spoiling anything for you because it is far more fun and gripping to discover each pivot for yourself. But just know that the writing is exquisite. Just know that the story will not disappoint. And just know that this book is the perfect taste of fantasy for those who may be looking for something a bit different, a bit old, and a bit new.

A lovely tale of love, betrayal, and the prophecies of the stars, The Star-Touched Queen stands striking amongst its literary compatriots. Sink into its pages and allow each tendril of ink and imagery to ensnare your heart as you discover a realm of infinite possibility and trial.

More books in this series: A Crown of Wishes (Companion Novel), Death and Night (Prequel/Novella)

Similar Recommended Reads: A Thousand Nights by E.K. Johnston, Shadow and Bone by Leigh Bardugo, A Court of Thorns and Roses by Sarah J. Maas, Cruel Beauty by Rosamund Hodge

I had the good fortune of being able to attend the book launch party for The Star-Touched Queen and it was loads of fun! 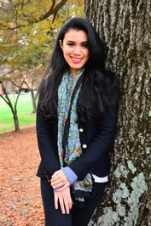 Roshani Chokshi comes from a small town in Georgia where she collected a Southern accent, but does not use it unless under duress. She grew up in a blue house with a perpetually napping bear-dog. At Emory University, she dabbled with journalism, attended some classes in pajamas, forgot to buy winter boots and majored in 14th century British literature. She spent a year after graduation working and traveling and writing. After that, she started law school at the University of Georgia where she’s learning a new kind of storytelling. The Star-Touched Queen is her first novel.
-Goodreads

2 thoughts on “The Star-Touched Queen”